The 2022 BC Rugby Senior Club Semi-Finals line-up is confirmed following a big weekend of action!

With all quarter-finals completed, the semi-finals have been set as we get closer to confirming the 14 teams that will be competing the seven provincial finals at the 2022 BC Rugby Senior Club Finals at South Surrey Athletic Park – home of Bayside Sharks RFC – on May 7.

The Women’s Premier League Final line-up has already been confirmed. Congratulations to Vancouver Thunderbirds and Castaway Wanderers, who will battle it out to lift the Gordon Harris Memorial Cup on May 7.

Semi-finals will be contested on Saturday April 30. Below is the current state of play across all seven BC Rugby Senior Leagues heading into semi-finals weekend.

Host Clubs – referencing Section 6.3 (a) of the BC Rugby Senior Rules of Competition: the venue of any Playoffs that determine Teams’ qualification for the Final of a Competition or Division shall be determined by the higher ranked Team in the Competition Standings. 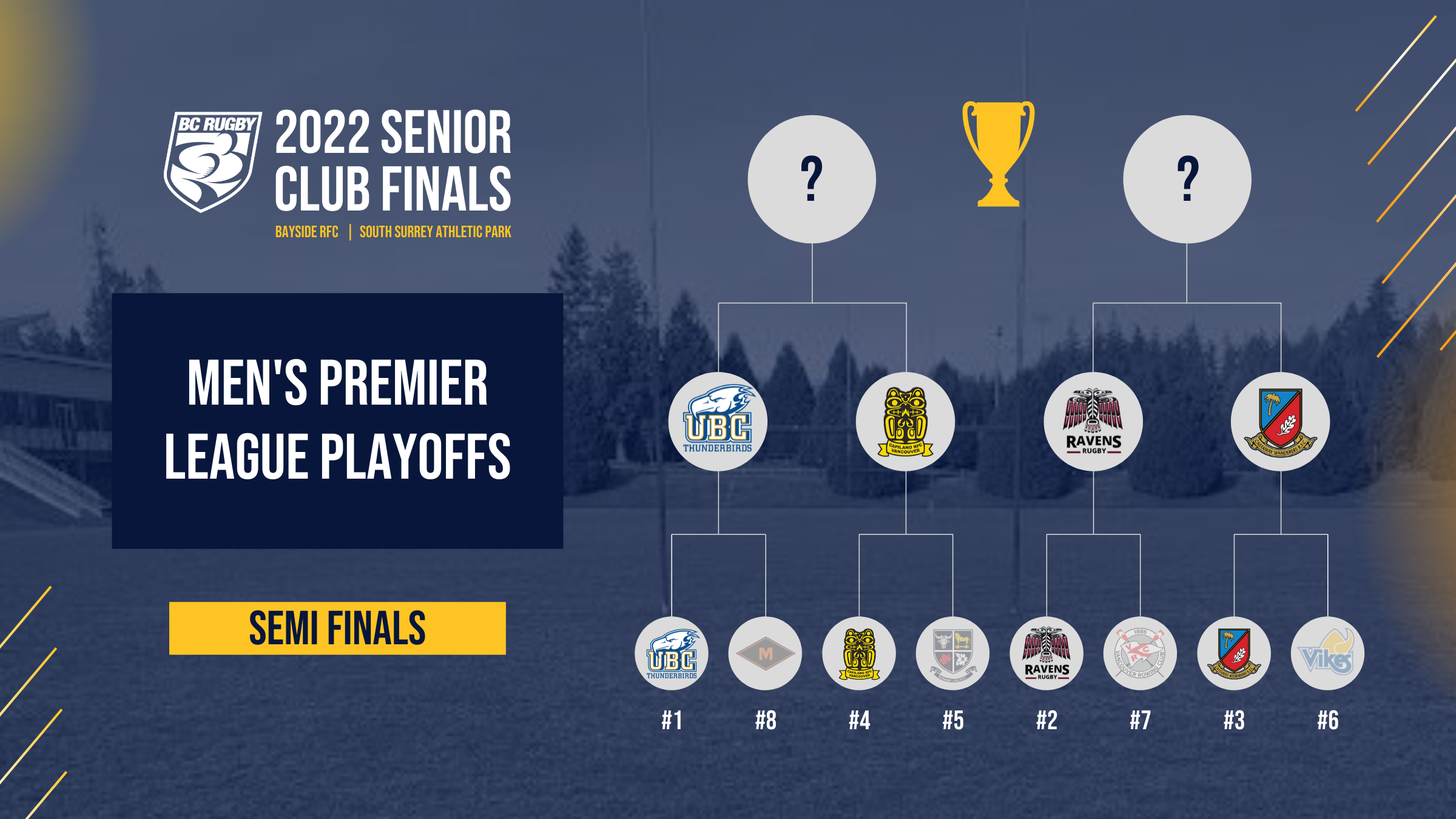 The Men’s Premier League sponsored by Onni is heating up nicely after a busy weekend of quarter-final action saw the division’s top four seeds advance.

Top seeds UBC Thunderbirds continued their unbeaten season with a 57-19 win over #8 seeds Meraloma to seal their semi-final spot. They will face Capilano RFC in the final four after the #4 seeds toppled #5-ranked Burnaby Lake RFC 55-31 at Klahanie Park. UBC beat Caps 31-20 in their regular season match earlier this year.

The Ravens host #3 seeds Castaway Wanderers in the semi-finals. Wanderers defeated #6 seeds UVIC Vikes 45-17 at Windsor Park to set up an exciting last four clash. Ravens and Wanderers met in the final week of the regular season, with Ravens edging a tight contest 38-31 at Windsor Park. 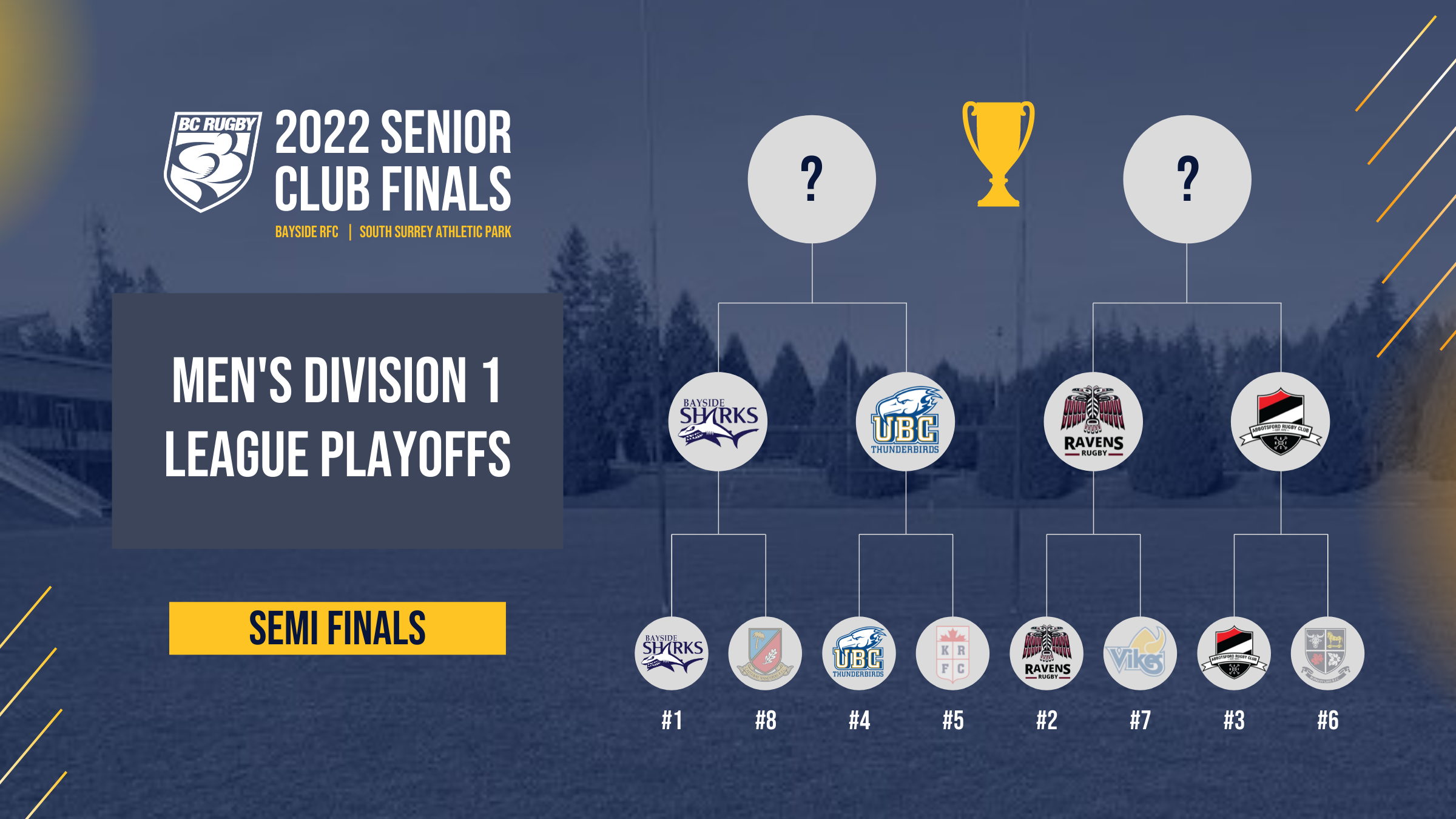 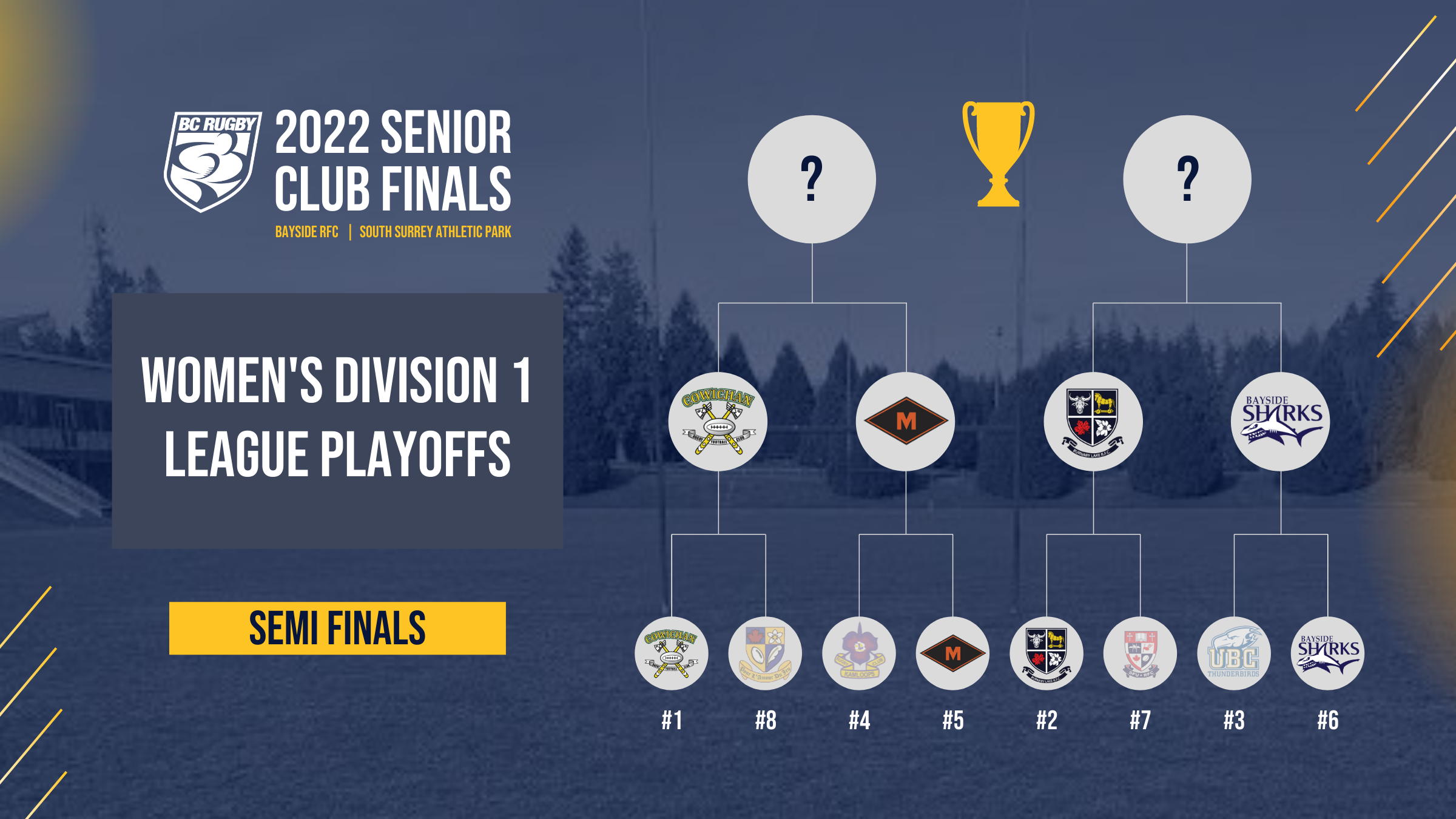 #1 seeds Cowichan are through to the final thanks to a bye after #8 seeds Scribes withdrew from the quarter-final. Cowichan will now host #5 seeds Meraloma, who defeated #4 seeds Kamloops 22-19 at Exhibition Park. Cowichan and Kamloops have yet to play each other this season.

In the second semi-final, #2 seeds Burnaby Lake will host #6 seeds Bayside Sharks RFC. Both teams advanced with a bye after #3 seeds Vancouver Thunderbirds and #7 seeds SFU both withdrew from the quarter-finals. Burnaby Lake defeated Bayside 17-12 at South Surrey Athletic Park in Week 2 of the regular season. 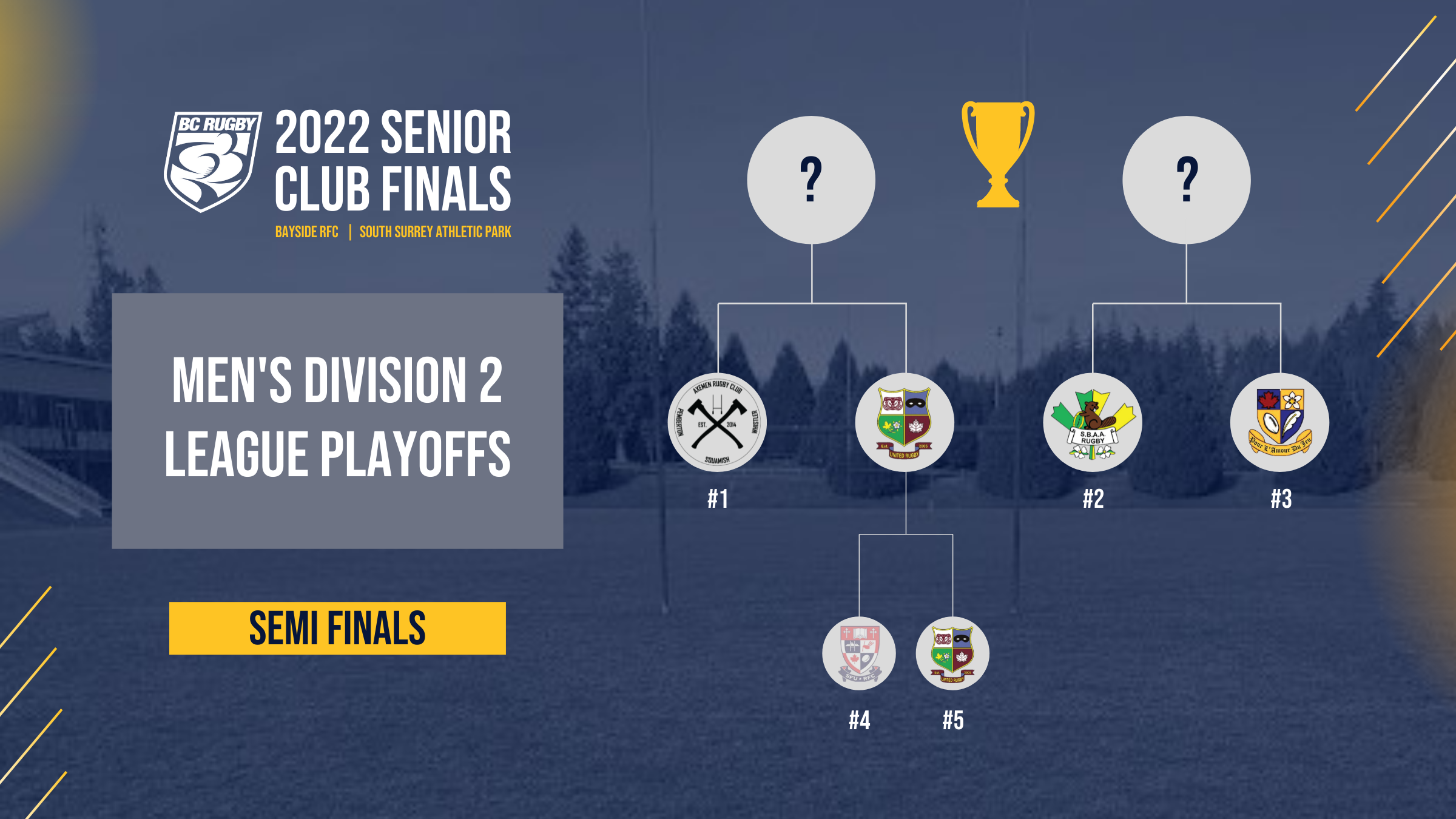 With only one quarter-final that needed to be played on April 23, #5 seeds United RFC beat #4 seeds SFU 28-12 to set up a semi-final against top seeds Axemen. United RFC enjoyed three wins over SFU this season, having won both regular season games. However, it will be a tough task to beat Axemen, who enjoyed a 61-0 win against United RFC earlier this season.

#2 seeded Surrey Beavers RFC will host #3 seed Scribes in the second semi-final, with the winners advancing to Championship match on May 7. 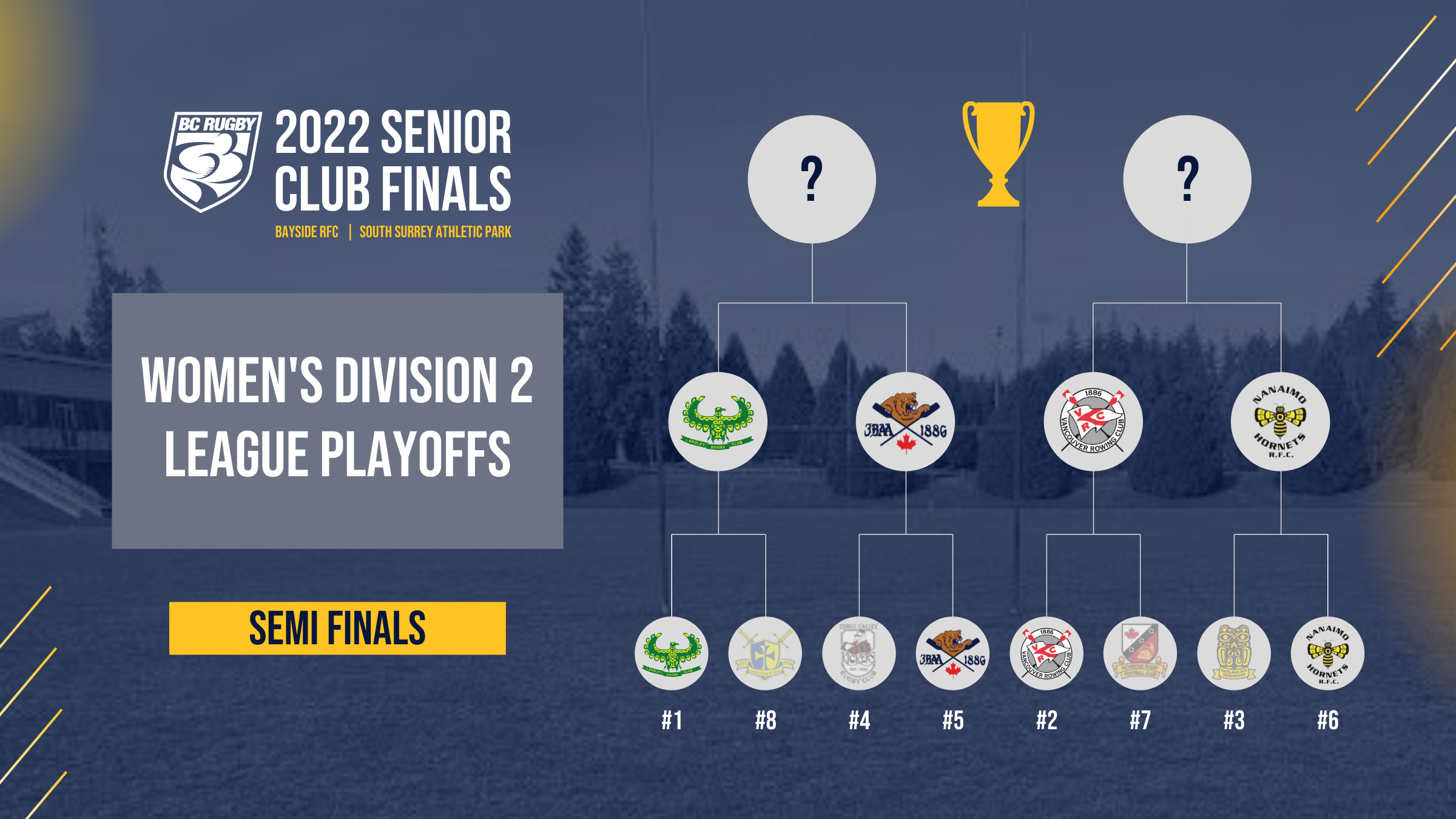 Top seeds Langley RFC Secured their spot in the Women’s Division 2 semi-finals with a 102-0 victory over newcomers Chilliwack Crusaders RFC at Crush Crescent. Langley will host #5 seeds James Bay AA for a place in the final after they saw off the challenge of #4 seeds Comox.

Langley enjoyed a 53-36 win over James Bay at MacDonald Park during the regular season,.

#2 seeds Vancouver Rowing Club proved too strong for #7 seeds Richmond, with the Rowers running out 52-19 winners at Jericho Beach Park. Rowers will host #6 seeds Nanaimo Hornets, who saw off #3 seeds Capilano RFC 38-34 in a close match at Klahanie Park.

The Hornets will be looking for revenge after suffering a 34-17 regular season loss to Rowers at Brockton Oval in March. 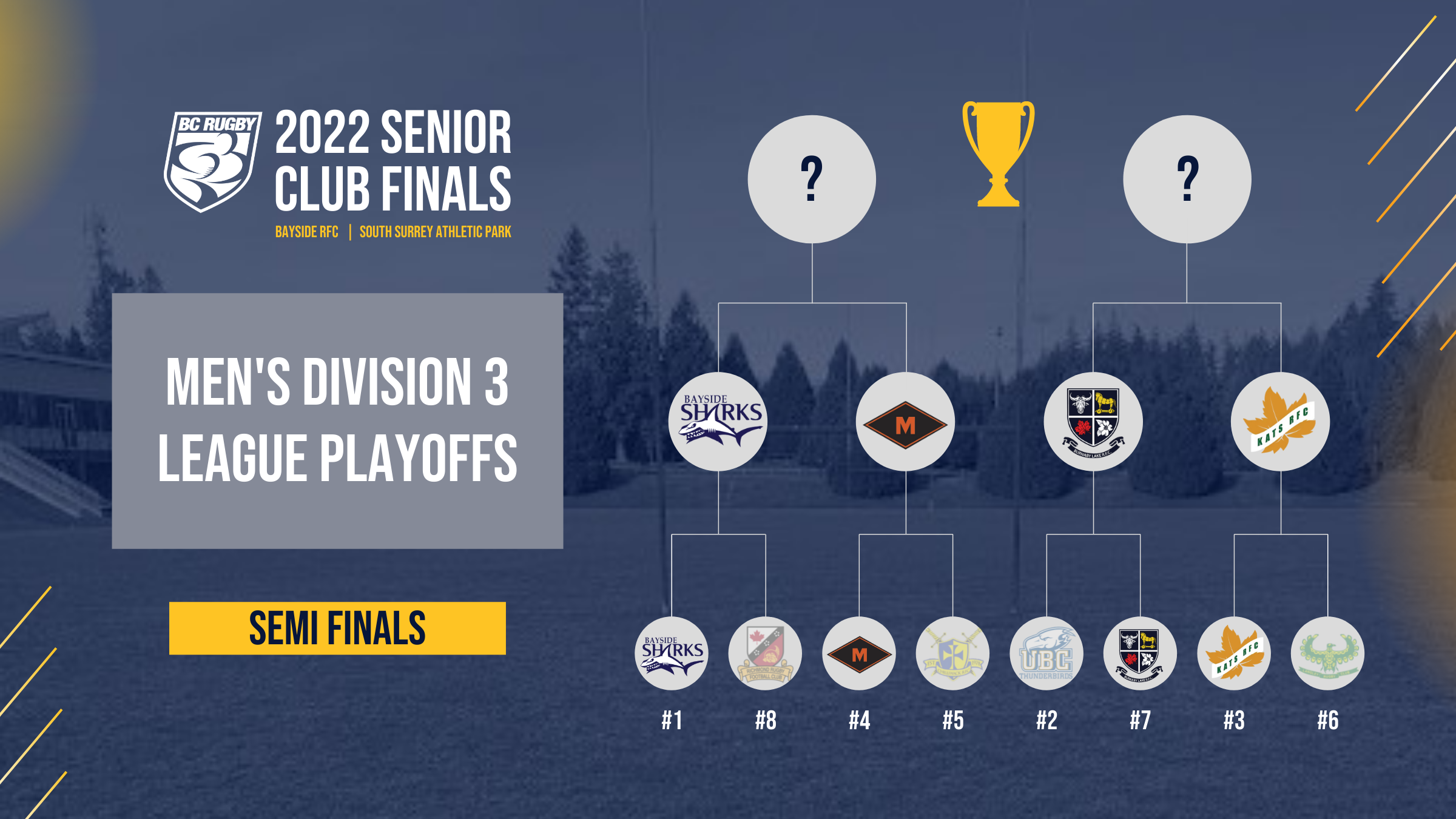 Top seeds Bayside Sharks RFC advanced into the semi-finals following a 25-17 triumph over #8 seeds Richmond RFC at South Surrey Athletic Park. They will host #4 seeds Meraloma in the semi-finals, who edged Chilliwack Crusaders 20-17 at Trout Lake.