The crowd of over 5,000 was roaring at Starlight Stadium in Langford, BC, as fans enjoyed a strong showing from Canada’s Senior Women’s Sevens Team. Among the athletes was BC’s Nakisa Levale (Abbotsford RFC) and UBC’s Florence Symonds (Vancouver Thunderbirds), who fought hard alongside their teammates to secure Canada’s 5th Place finish and four total match wins throughout the two days of action. 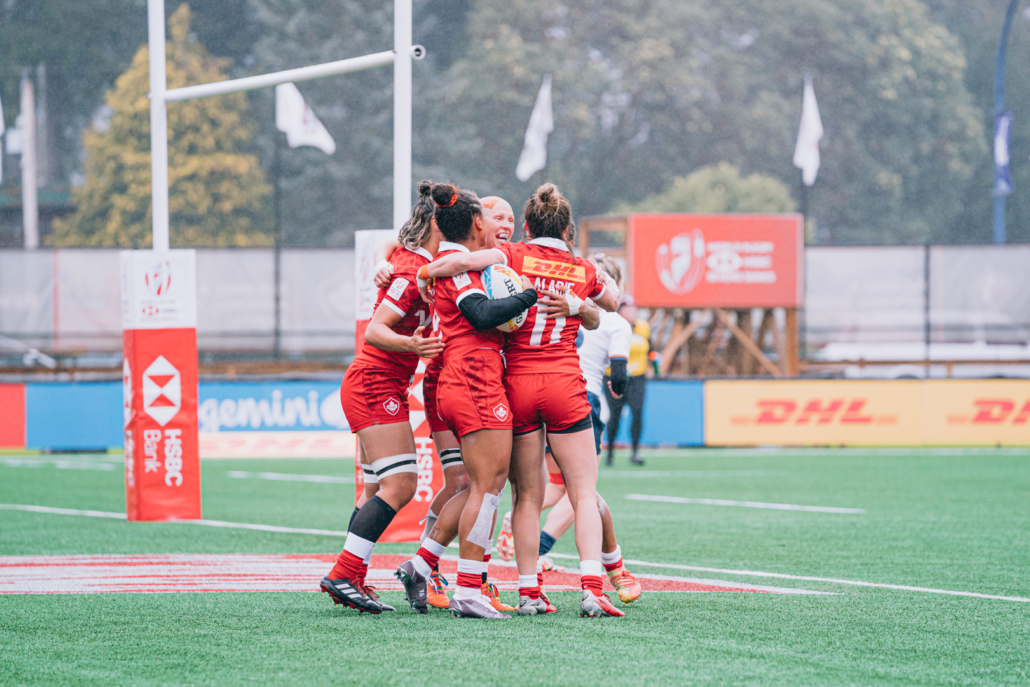 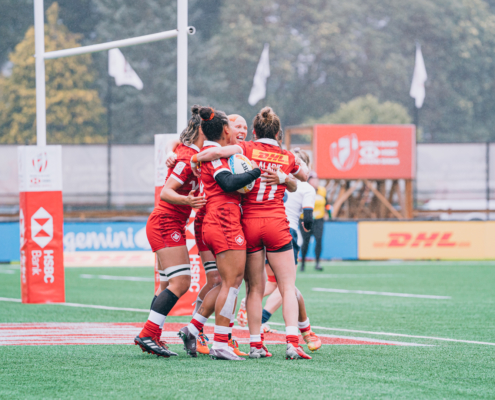 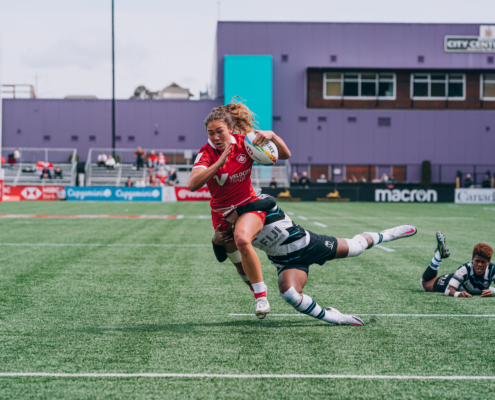 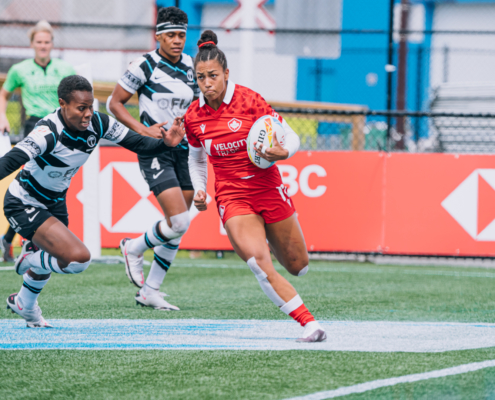 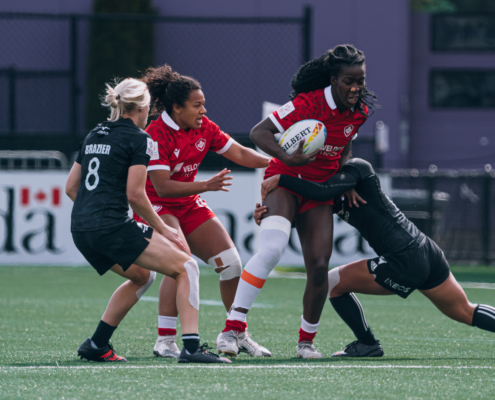 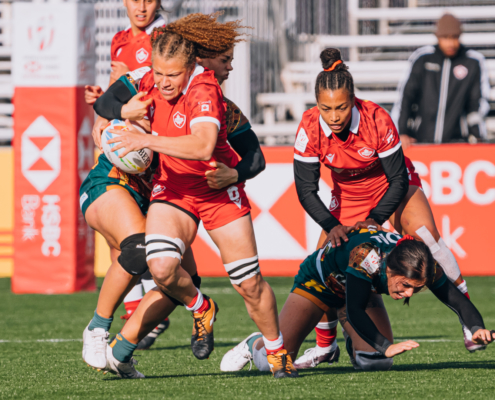 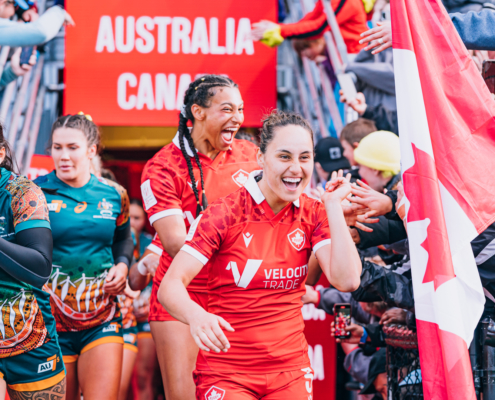 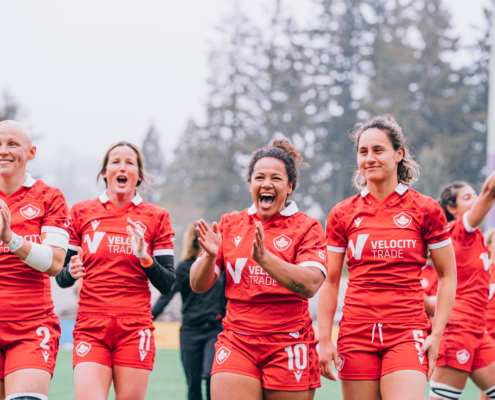 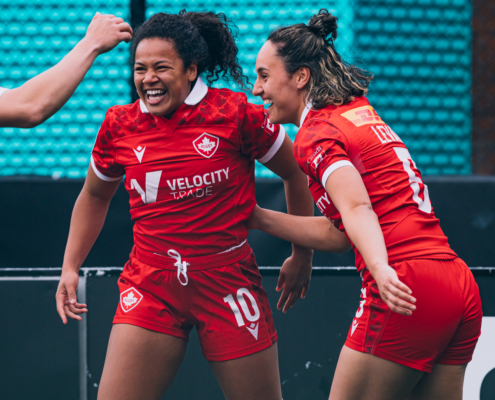 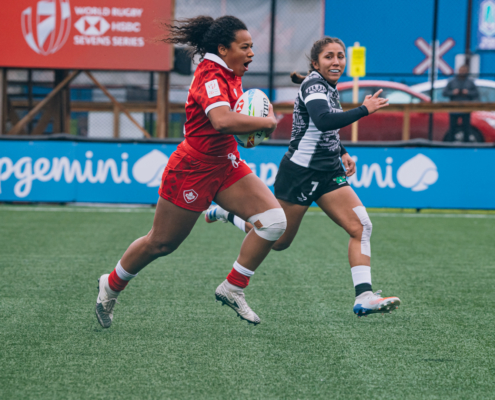 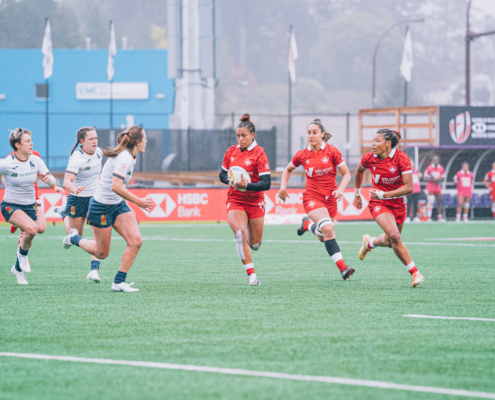 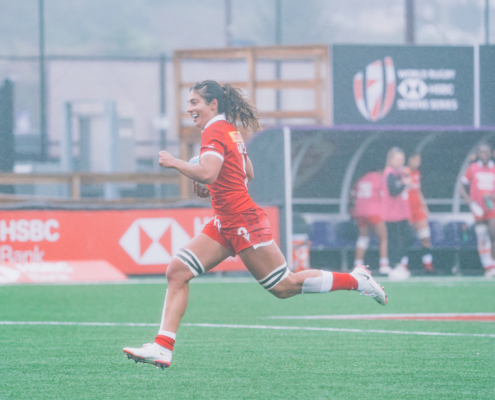 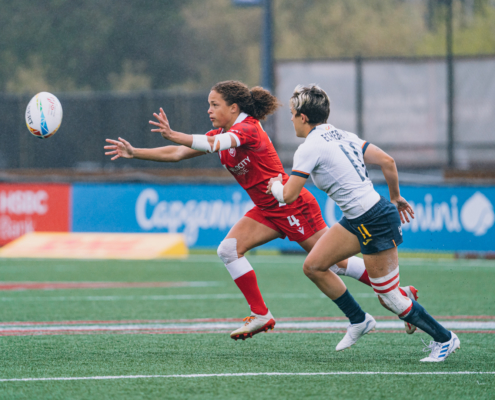 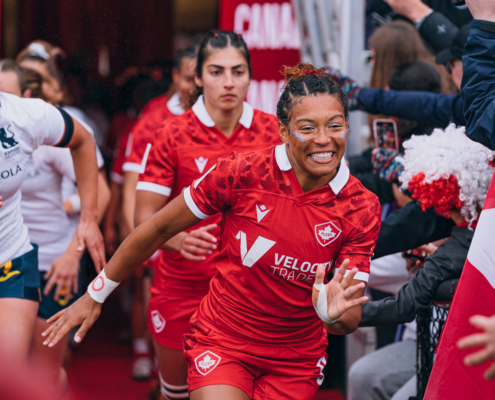 Canada’s Women’s Sevens Team was drawn in Pool A along with Australia, Spain and Mexico.

In the first game of day 1 against Spain, Canada had a strong start with an opening try that Spain quickly  responded to. With a steady defence from Canada, the athletes were able to put two more tries on the board in the second half, securing them a 19-10 victory.

The momentum continued into their second Pool match against Mexico, with Canada scoring a swift try in the first minute of play. They refused to let up on their opponents with several more unanswered tries, winning the match 43-0.

The final Pool match against Australia proved to be a challenge. Canada fought hard in the first half, with Australia just managing to put a try on the board in the final play. The Aussies had their endurance on display as they added three additional tries in the second half, but Canada did not give up, and responded with a late try to finish the match 28-5 for their opponents.

The energy was high as Canada entered day two as the second seed in Pool A, starting the quarterfinals with a difficult match-up against Pool C’s top seed and 2019 Tournament winners, New Zealand. Despite their best efforts, New Zealand’s speed and agility allowed them to score multiple unanswered tries and an eventual 38-0 victory over Canada, securing Canada’s spot in a 5th-place semi-final.

Canada went into their next match against Fiji with fire. Both teams put on a show for the chanting crowd, fighting neck-in-neck for a spot in the 5th-place final. After showing off some impressive skills and four incredible tries, Canada managed to run it home with a 26-19 win in front of the home crowd.

The 5th-place final saw Canada meet USA, whom had previously made the final after some skillful wins over England and Spain. With both Teams vying for the win, Canada started strong with a try that was quickly returned by USA. Canada dug deep and was able to secure a second try, beating USA 12-7 and cementing their 5th place finish.

BC OFFICIALS SHOWCASE THEIR TALENT IN LANGFORD

Along with the athleticism shown by the Canadian Women, 7 BC Officials wowed the crowd in Langford while on the officiating team at the HSBC Canada Women’s Sevens. 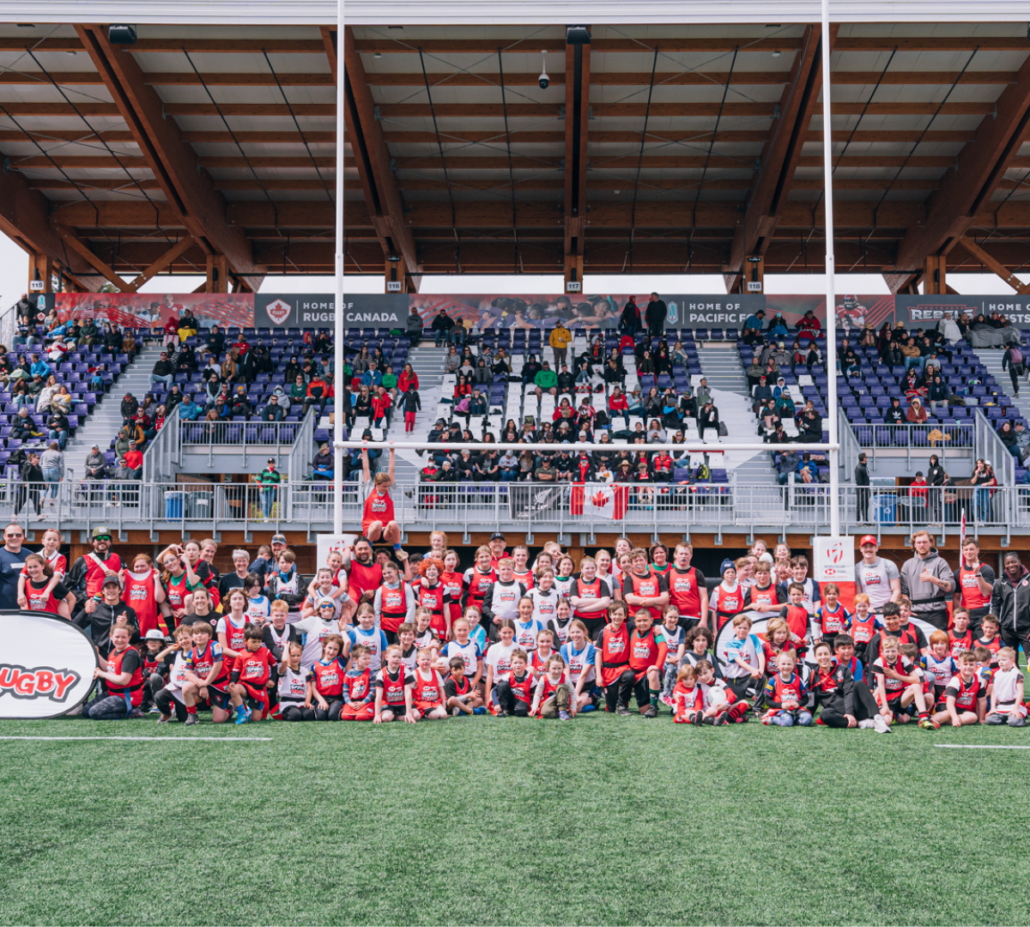 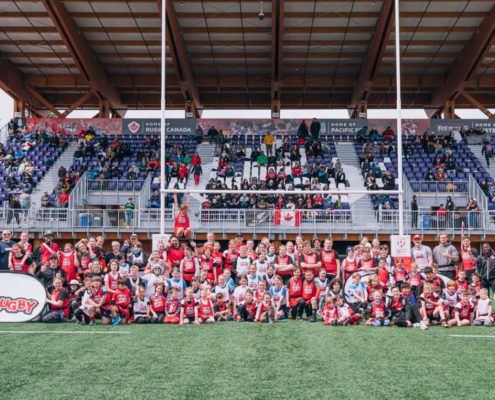 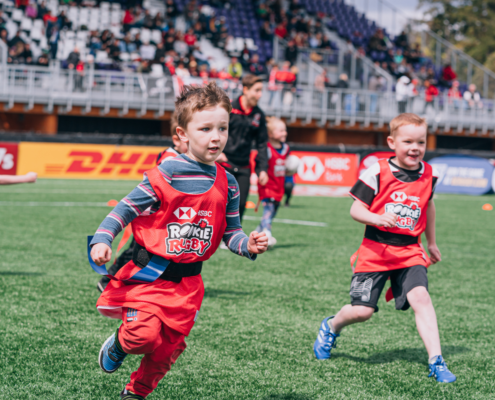 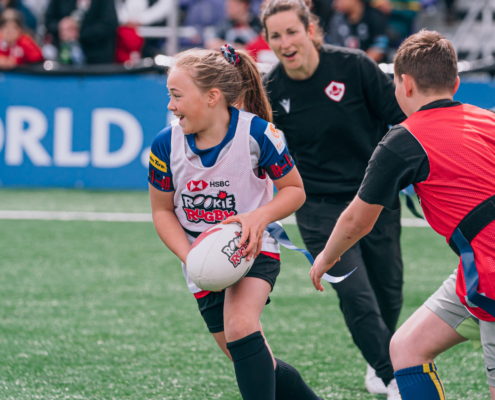 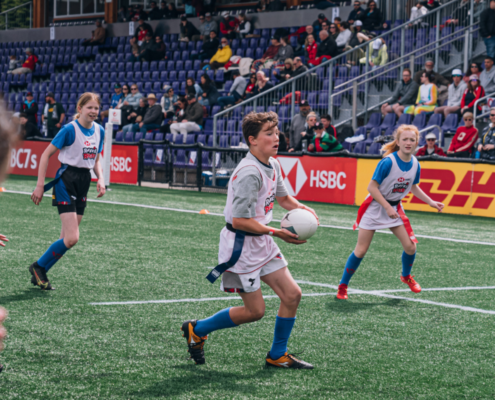 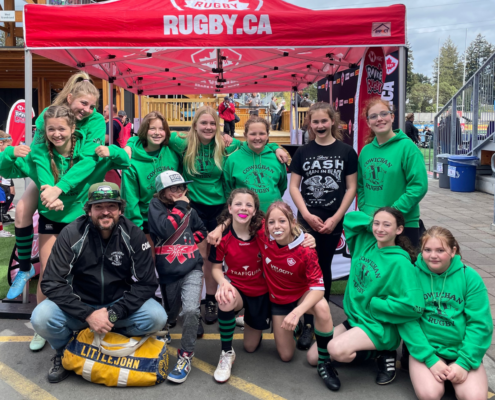 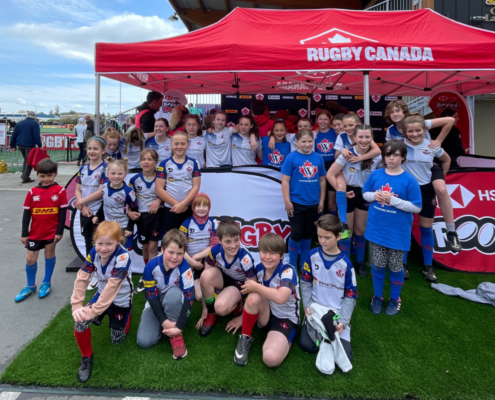 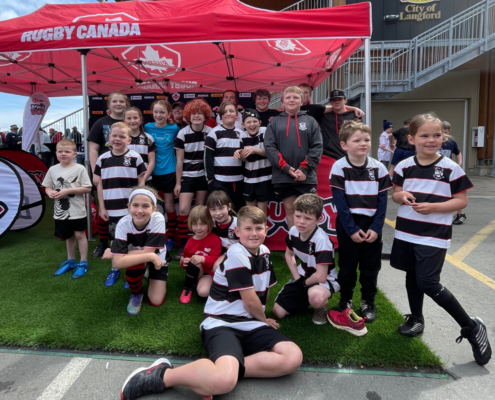 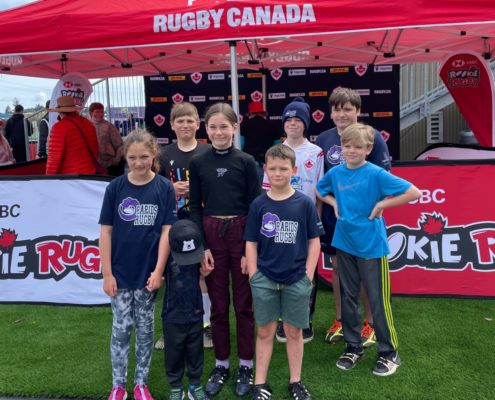 Campbell River, Comox Valley, Cowichan and Westshore Junior and Mini Rugby Players had a blast on-field between Sunday’s semi-finals. During the Rookie Rugby Session at Starlight Stadium, the young athletes had the opportunity to play alongside some of Canada’s Men’s and Women’s Sevens stars in a series of flag Rugby matches and mini games. Thank you to all the coaches and players who helped make this a memorable and fun Session for everyone involved!