Finishing in LA with five defeats from five matches, Henry Paul’s side will take lessons learned as they shift focus towards the 2022 Rugby World Cup Sevens in Cape Town, South Africa, this September.

Below is a round up of the weekend’s action at Dignity Health Sports Park in California.

Canada’s first match of the day was against France, who opened the scoring in the first half with three unanswered tries. Late support to the breakdown hurt the Men’s possession percentage.

In the second half, different attacking efforts saw Brock Webster kick through with Josiah Morra chasing, but France was able to collect and go the length of the field. It ended 42-0 and with Japan up next.

Japan struck first and continued to score unanswered tries after Canada’s first attacking opportunity from a lineout was turned over. The second half saw a valiant comeback attempt from the Men, though, scoring three tries between Lachlan Kratz, Jake Thiel, and Thomas Isherwood. Time just ran out though as Japan won 26-19 and ended Canada’s involvement for the rest of the tournament. 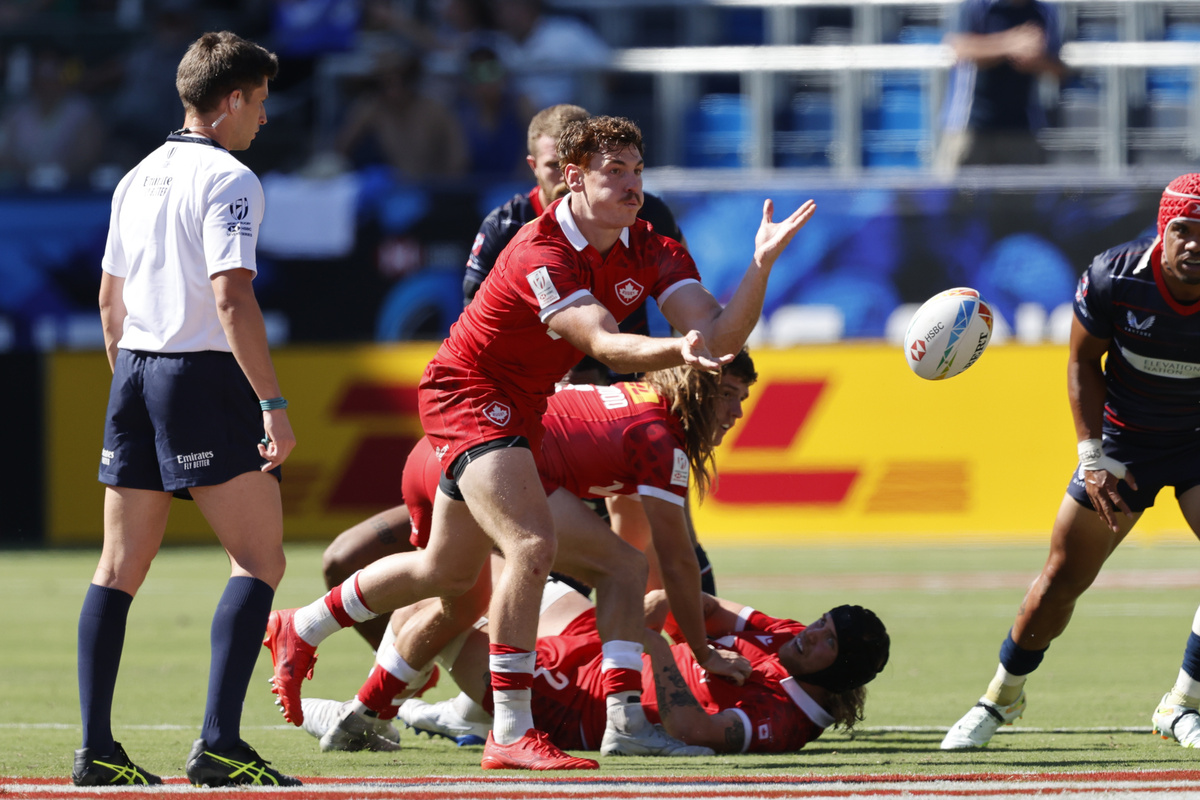 Canada’s Senior Men’s Sevens team took on USA, New Zealand, and South Africa in Pool B on the opening day of the 2022 HSBC LA Sevens. Despite spirited play across the full roster, the Men went winless on Day 1.

Canada lined up against New Zealand in the first match of the day. New Zealand scored first, but Canada answered with an Alex Russell try. The opposition headed into the half ahead 12-5. The second half only saw additional points from the opposition, falling in match one 26-5.

Next up, the Men’s team took on first-place South Africa. Their opposition scored three tries before a quick tap play saw Josh Thiel bat out a long pass to Josiah Morra who backed himself into the corner, 17-5 South Africa at the half. Another offensive effort from Thiel after South Africa’s restart did not go 10 meters set up Brock Webster for his first try of the weekend, 22-12.

A penalty against the opposition set up set-piece success, a crashing runner sets up quick ball as Webster dives and reaches for an athletic try attempt in the corner. TMO deemed the try a knock on and South Africa kicked up field from their scrum. With the final play of the match, Canada scored a team try at the buzzer finished by Anton Ngongo. The Men’s side fell just short of the victory, 22-17 to the opposition.

The final match of pool play saw Canada face neighbors and tournament host nation, USA. Webster started off the scoring for the final pool play match. Their opposition fired back with three unanswered tries. After a clean collection off the restart, Josiah Morra closed the score line before half 19-12. Second half saw a USA knock on that set up a set-piece opportunity resulting in a Morra offload to Webster for his third try of the day. With one more try from the opposition though, Canada fell to USA, 26-17.

Canada vs. Wales: BC’s De Goede Captain, Where to Watch