Canada’s Senior Women’s Sevens team finished in 6th place at the HSBC France Sevens, while the Men’s team fell to Wales in their 13th-place semi-final following an action-packed weekend in Toulouse.

The France Sevens concludes the Women’s HSBC World Sevens Series season as Canada finished 7th in the standings, while the Men’s series continues as they head to the HSBC London Sevens next weekend (May 28-29) at Twickenham Stadium.

Catch up on the weekend’s matches below: 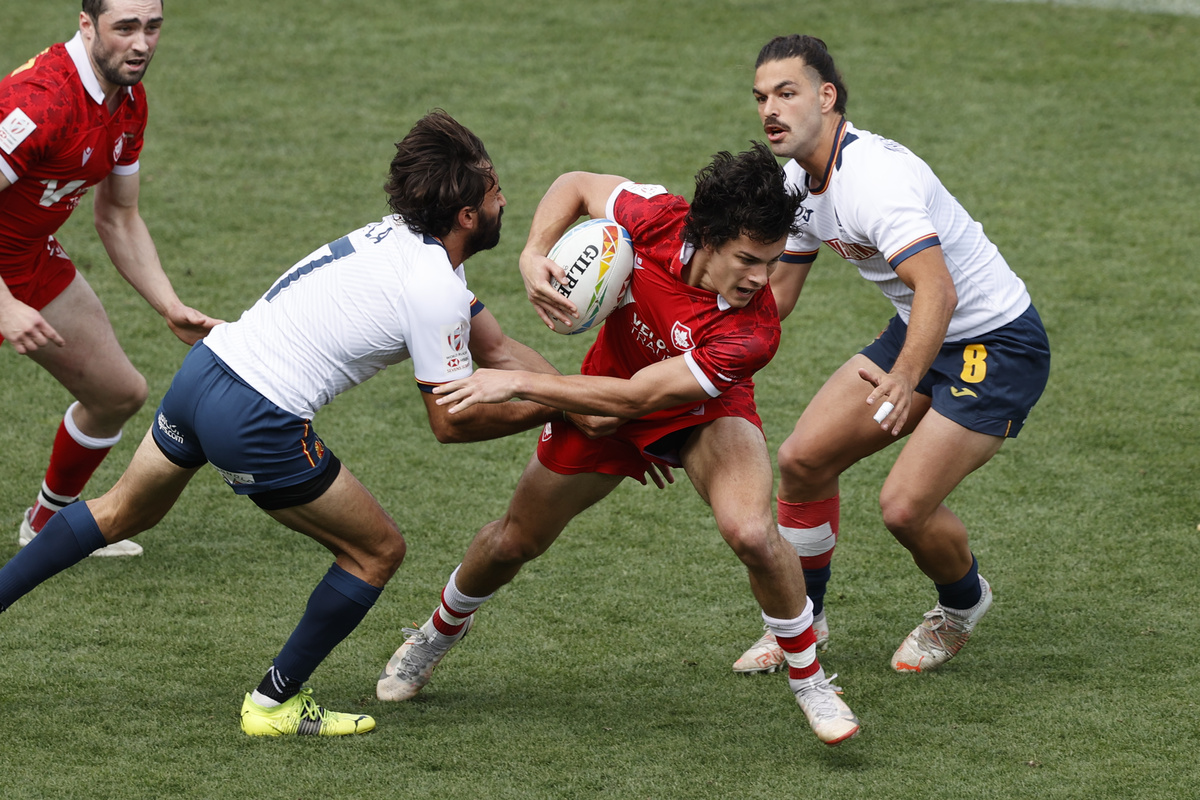 Henry Paul’s Men’s side kicked off the day’s play as tries from Cole Swannack, Tyler Morgan (2) and Callum Williams ensured the Welsh went into half time with a commanding 22-0 lead.

Brock Webster scored just after the break to get Canada on the board but a 12th-minute Tom Williams try secured a 27-7 victory for Wales.

In their 5th-place semi-final, the Women’s team were forced to come from behind after the USA’s Kristi Kirshe opened the scoring in the second minute. Keyara Wardley levelled up the match as she went over before Olivia De Couvreur scored to ensure Jack Hanratty’s side went into half-time 14-7 up.

A second-half Bianca Farella try sealed a 19-7 victory and made sure Canada advanced to the 5th-place play-off for the second tournament in a row.

The side of the game we really love to see

There, the Women’s team faced host nation France. In a tightly contested match, the deadlock was eventually broken via Jade Ulutule and Yolaine Yengo tries, which gave the hosts a 12-0 half-time lead.

After the break, Joanna Grisez was sent to the sin bin. Canada took full advantage as, deep in their own 22, they used quick hands out to Krissy Scurfield who raced the length of the pitch to touch down.

France immediately made amends thanks to a Grisez score before Ella O’Regan capped her first HSBC Sevens Series tournament with a try. It didn’t prove decisive, though, as France emerged 19-14 winners.

The Women’s team began the day with their final Pool B match against New Zealand. It was expected to be a tough test and proved to be so as tries from Kelly Brazier, Jazmin Hotham and Theresa Fitzpatrick sealed a 17-0 victory for the Black Ferns.

The Men’s side took on Japan in their final Pool A match. Clever footwork from Cooper Coats opened up the Japan defence and his kick had Brock Webster chasing down the sidelines before he claimed possession and touched down for the game’s opening score. Japan, though, responded immediately through Timo Fiti Sufia and Kameli Raravou Latianara Soejima to go into half time with a 14-7 lead.

After the restart, Canada scored a quick-fire try as captain Phil Berna stole possession and ran in under the posts. That was followed by another score at the resulting kickoff as pressure from Jake Thiel forced a mistake by Japan, allowing Elias Ergas to go over. Further scores from Ergas, Prevost and Isherwood sealed a 40-14 victory.

Results in other matches meant Canada’s Men’s side finished third in Pool A and faced Spain in the ninth-place quarter-final. Coats got the scoring underway with a try in the corner after he was fed by Alex Russell before Josep Serres and Pol Pla scores gave Spain a 14-5 half-time lead.

In the second half, a well-worked Canadian move from a lineout ensured they had a two-on-one on the far side which was well finished by Webster. A David Richard try then saw them retake the lead but Juan Ramos responded with a late converted try which earned Spain a 21-19 victory.

In their Cup quarter-final, Canada’s Women’s team took on Ireland. Straight from kick off, Lucy Mulhall scored under the posts as Ireland jumped out to an early lead. Moments later, Renee Gonzalez backed her speed around the outside and touched down to bring Canada level. Just prior to half time, Olivia Apps burst into space to go over before Erin King scored for Ireland meaning Canada went into the break with a narrow 14-12 advantage.

The second half saw Ireland go back in front as King grabbed her second try before a deft Bianca Farella offload unlocked the Ireland defence and ushered in Olivia De Couvreur for a go-ahead score. A pacey Eve Higgins run down the wing with a minute remaining gave Ireland a decisive 22-21 lead as they claimed the win. 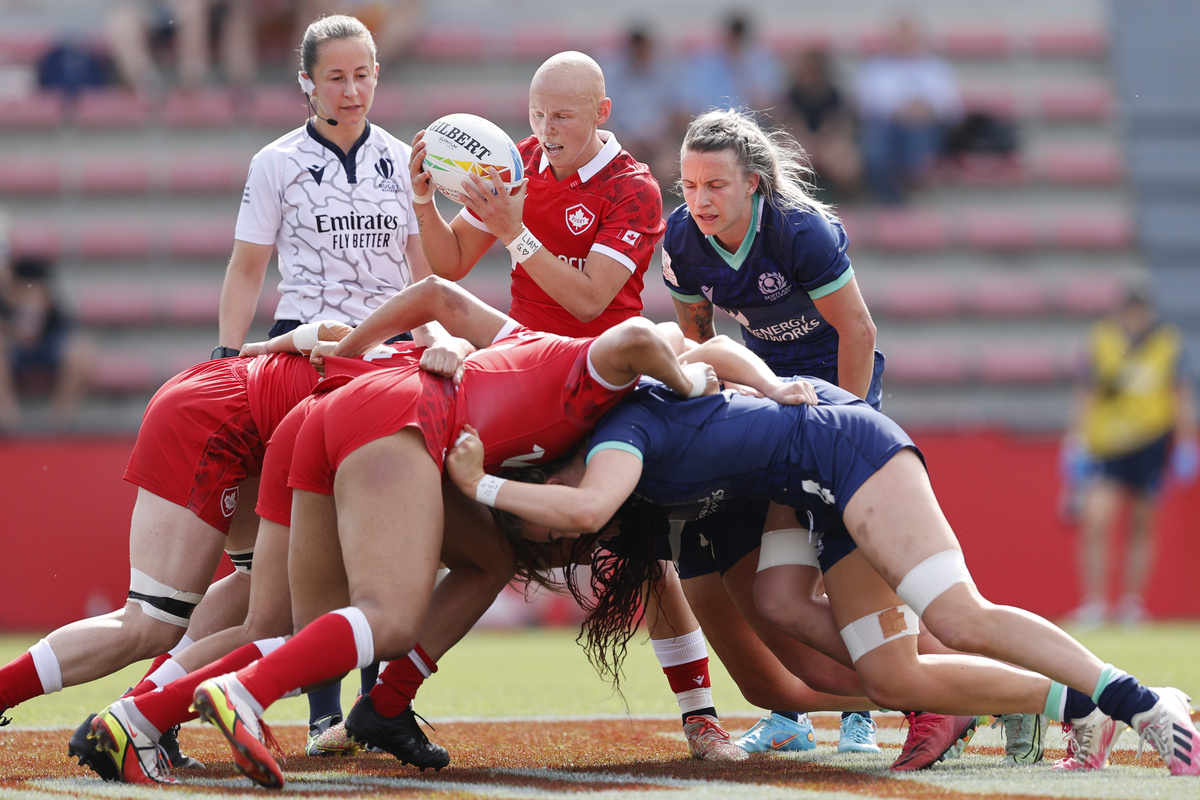 The Women’s team opened proceedings against Spain. Their opponents took an early lead via a Paula Requena try but Keyara Wardley responded immediately for Canada before Krissy Scurfield scored to give them a 14-5 half-time lead. Beatriz Dominguez went over to narrow the advantage but Wardley grabbed her second try, before Farella scored late on, to seal a 26-12 victory for Canada in their opening match.

In the Men’s event, Canada got their tournament started with a clash against England. The teams exchanged early tries through Alex Davis for England and Alex Russell for Canada. After that, England turned on the after burners as further scores from Tom Bowen, Api Bavadra and Tom Emery ensured they won the match 24-5.

Next up, the Women’s team took on Scotland. Both sides had players sent to the sin bin in the first half but neither capitalized on their numeric advantage as the match remained scoreless going into the break.

In the second half, with Canada backed up deep in their own half, Fancy Bermudez broke free and offloaded to Emma Chown who ran the length of the pitch to open the scoring. Canada doubled their lead when Scurfield used her pace on the outside to evade the Scottish defence and touch down. Rhona Lloyd responded for Scotland but it wasn’t enough to deny Canada a 14-7 victory.

The Men’s side’s second and last match of the day was against Argentina. Quick thinking and hands from Russell and Anton Ngongo at the near sideline resulted in the latter going over for the match’s opening score. Matias Osadczuk got Argentina on the board with an immediate response but Jake Thiel restored Canada’s lead just prior to half time with a powerful run from deep.

After the break, Henry Paul’s side continued to hold firm in defence, even when they went a man down after David Richard was sent to the sin bin. Their line was eventually broken, however, when Tobias Wade scored to level the match at 12-12 with under two minutes remaining. With just seconds left on the clock, a side step from Richard created all the space he needed to go over and complete a remarkable 19-12 victory.

2022 Provincial Regional Championships: What You Need To Know