It can be hard moving to a new place where you don’t know anyone – but everyone is welcome in the Rugby community.

For Megan Kimble and Sonia Kung, joining Scribes RFC gave them a home away from home.

In the week of International Women’s Day, Megan and Sonia tell their stories about how an East Vancouver Rugby Club welcomed them with open arms.

Find Your Next Club – Become a BC Rugby Member 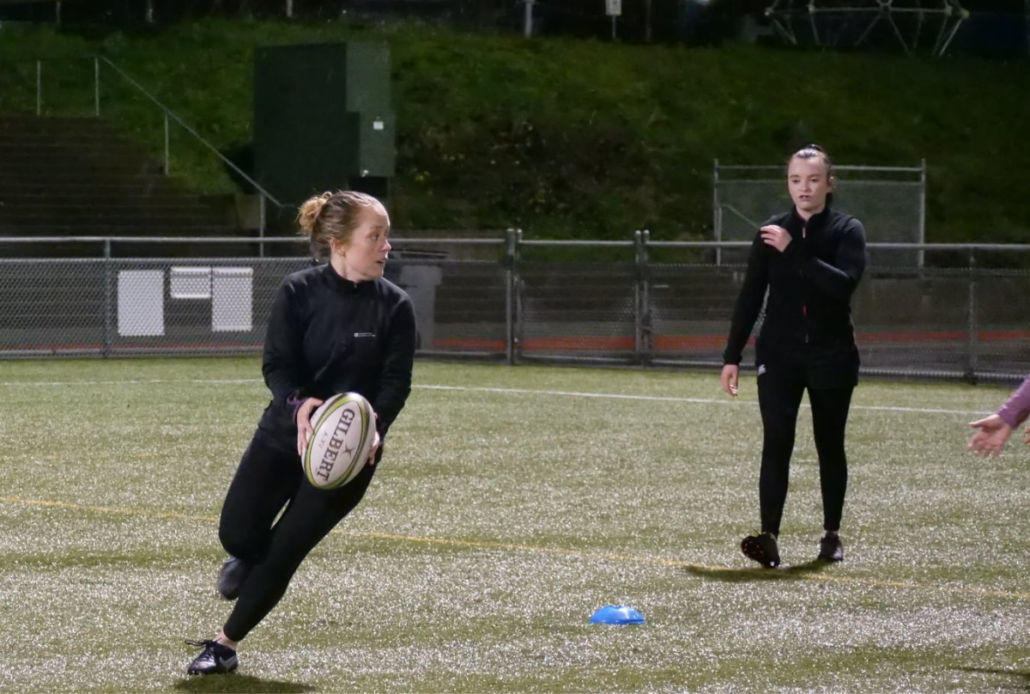 MEGAN KIMBLE‘S STORY: “JOINING SCRIBES IS THE BEST DECISION I’VE MADE ON THE WEST COAST!”

I played Rugby in high school for two years and absolutely loved it! It quickly became my favourite sport out of the handful I was involved in. I was petite but tough, and gave it my all, so I really enjoyed the physical aspect of the game.

Unfortunately, in our final game of the season during my second year, I ended it with a pretty serious head injury. After my knock to the head, I decided it was best to focus on school and other (non-contact) sports. I was crushed, but it felt like the most responsible decision at the time.

Throughout university, a lot of my male friends played Rugby. I loved going to watch games and cheer them on, but I never imagined myself playing again. I had a voice inside me that always said I was too small to play. I’ve been the same size since ninth grade and stand at a whopping 5-foot 1 inch!

I moved to Vancouver in September 2021 and was eager to get active and make new friends, since I work fully remotely from home. When my two male roommates joined Scribes, I thought it would be a fun opportunity to go watch Rugby and chit chat on the sidelines. There was a social gathering where I met some of the ladies from the women’s team.

“Seeing the diversity in physicality in women’s Rugby made me think twice about my pre-conceived notion of what a Rugby player should look like.”

I let it slip that I had played Rugby (many) years ago and next thing I knew, I was at practice the following Monday. I felt immediately accepted by the team: they didn’t care that I hadn’t played since I was 16. I showed up and they welcomed me with open arms.

I was nervous I’d be the smallest player on the pitch but was put at ease seeing some of my teammates absolutely kill it who were my size (or smaller). Seeing the diversity in physicality in women’s Rugby made me think twice about my pre-conceived notion of what a Rugby player “should look like.”

I’m a winger and I will never be strong or tall enough to be a prop or a lock, but that’s okay, because there’s a position for every body type and each player’s unique skills.

When we’re all on the field together, it’s so cool that we all have different strengths, come from different backgrounds and are all different ages. But when we put our boots on and step on that pitch, we all work together as a team.

It’s only been a couple months since I joined, and I can confidently say, joining the Scribes Women’s team has been the best decision I’ve made since making the move to the west coast! 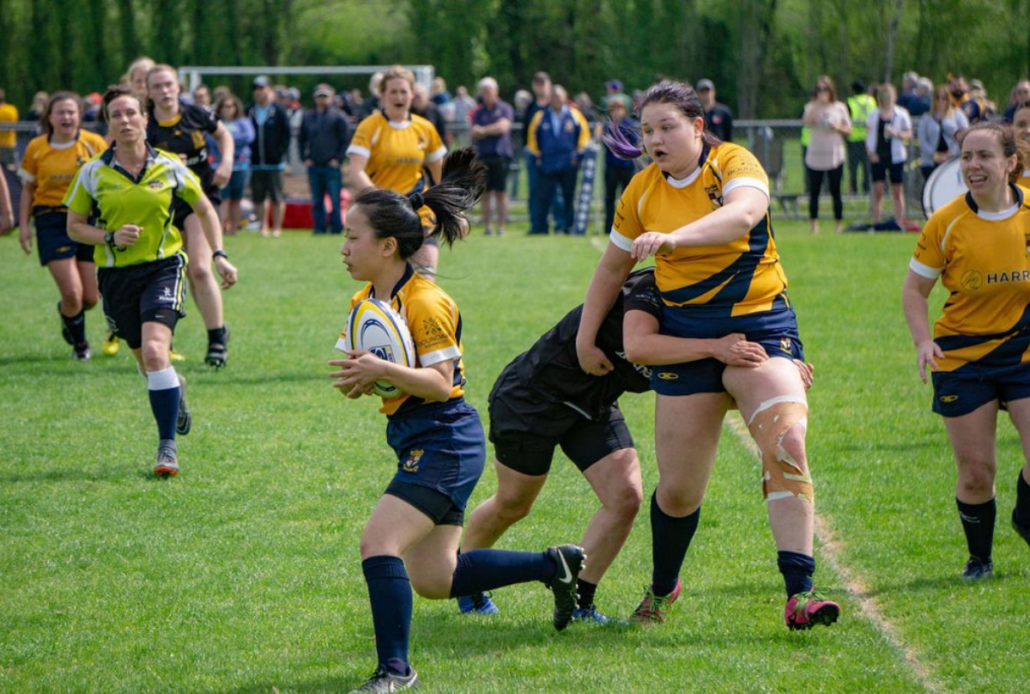 I came to Canada in 2016 when I was 19. I’m an international student who came here on my own and aimed to pursue education. Back home, I used to play touch rugby.

After arriving in Vancouver, I decided to join a Rugby club and play Rugby. In 2017, I joined Scribes, which became one of the best decisions I have ever made.

I randomly dropped by one of the practices of Scribes. I received a very warm welcome and met some lovely people I would cherish. I met people of different ethnicities, sizes and different cultural backgrounds.

We all improve together as a team and have all the irreplaceable moments together throughout practices. I might not be the ideal body type for Rugby, but I never let anyone tell me what to do.

“I might not be the ideal body type for Rugby, but I never let anyone tell me what to do. I believe I can play Rugby. I dare to try, and the rewarding feeling of being in a team is unique and irreplaceable.”

I believe I can play Rugby. I dare to try, and the rewarding feeling of being in a team is unique and irreplaceable.

I had a lot of memorable moments in the team, and the people I met in Scribes became my support system. Rugby gave me a community, a home away from home. A community that I would never want to miss in my Canadian adventure journey.

I would like to see more and more people join Rugby and be a part of this amazing community. 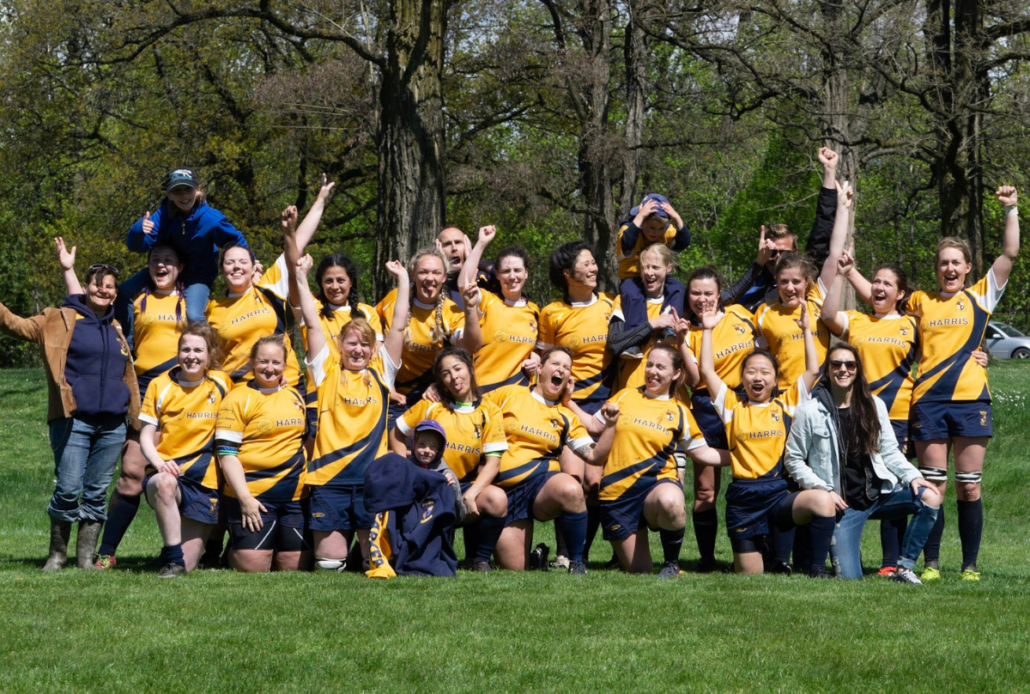 Scribes are always recruiting new players of all experience levels. The Women’s practice schedule is: