The Vancouver Rogues enjoyed a battling victory against the Seattle Quake to boost their confidence as preparations for the 2022 Bingham Cup continue.

Every Friday, BC Rugby will post a series of stories documenting the team’s journey to Ottawa.

This week, BC Rugby spoke to Rogues player Leo Recompsat about how he progressed from Touch Rugby to playing in his first season of full contact.

BC Rugby is proud to support the Rogues on their journey to the Bingham Cup, and continues to help with logistics, field bookings, coaching sessions and donations. You can support the Rogues by visiting its GoFundMe page. The Club has raised over $4,000 of its $10,000 goal. 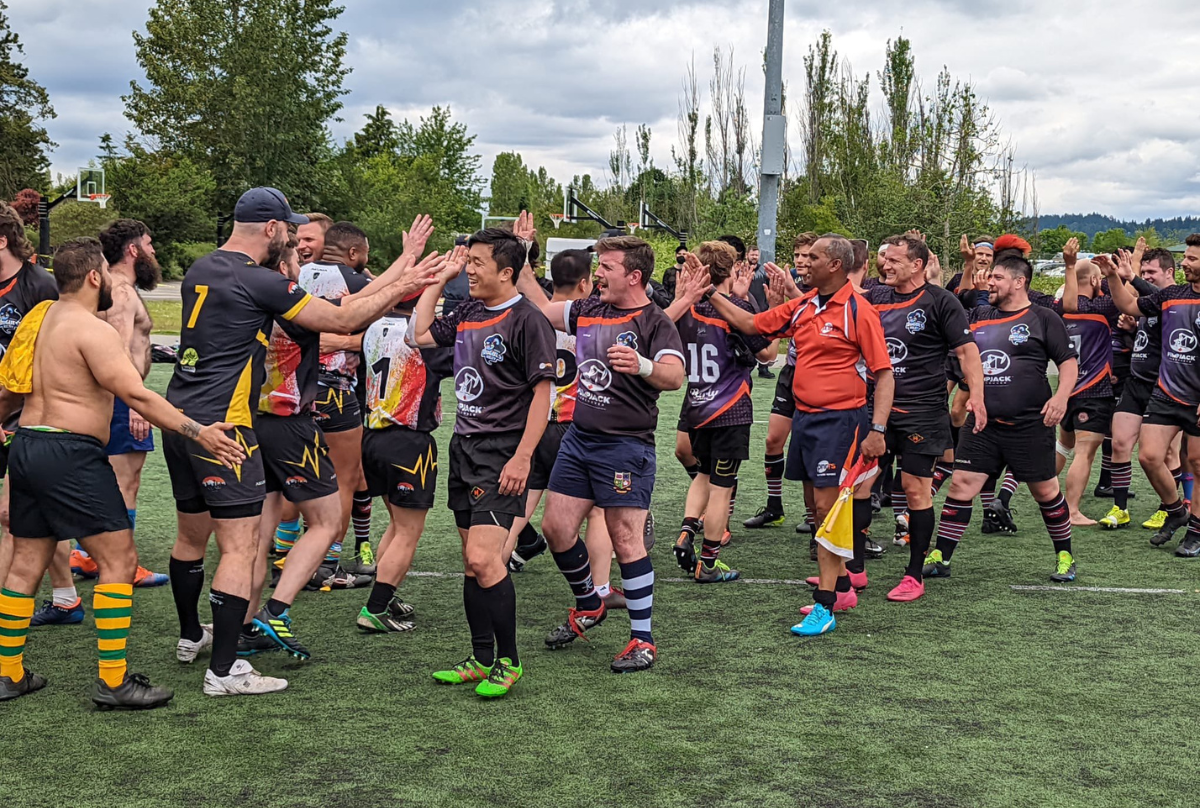 LEO’S STORY: THIS COMMUNITY WAS TOO GOOD TO LEAVE BEHIND

Growing up in Alberta, Leo had never seen a Rugby ball before. He was first introduced to Touch Rugby in Wellington, New Zealand, where he spent half a year enjoying the fun, fast-paced version of the game and, after moving to Vancouver, Leo played for three years with the local Touch community and joined the Meraloma Touch Rugby league. He soon met Rogues Club President Brennan Bastyovanszky, and joined the Club mid-pandemic.

In September 2021, when Clubs began returning to contact training and with the Fall season on the horizon, Leo had a decision to make. He had no previous desire to play contact Rugby, but this community was too good to leave behind.

“I thought ‘I guess I can start playing Rugby,’” Leo told BC Rugby. “It was never my intention to play contact, but I had too much fun with the people around me to stop and call it quits.”

“Your sexuality doesn’t have an impact on your ability to play sports.”

With other players in the same boat, it created a unique bond within the team as they approached their first season in BC Rugby Senior Leagues. Regardless of what the scoreboard said, each game played felt like one big victory after another. The squad felt a huge sense of pride in achieving things they didn’t think they could.

For Leo, playing in the BC Rugby Senior Leagues gave good experience.

“It’s one thing to be welcomed and feel inclusive at your own Club, but when you play other teams, you’re only half of the people on the pitch. Most teams were happy they had a new group of people to play against and it was a reaffirmation that your sexuality has nothing to do with your ability to execute anything on field. It doesn’t impact your ability to play a game,” he said.

Leo added: “I really appreciate that we spent the year playing other Clubs, not just inclusive gay Rugby teams. It reassured that we could hold our own against anybody else. At the end of the day, your sexuality doesn’t have an impact on your ability to play sports.” 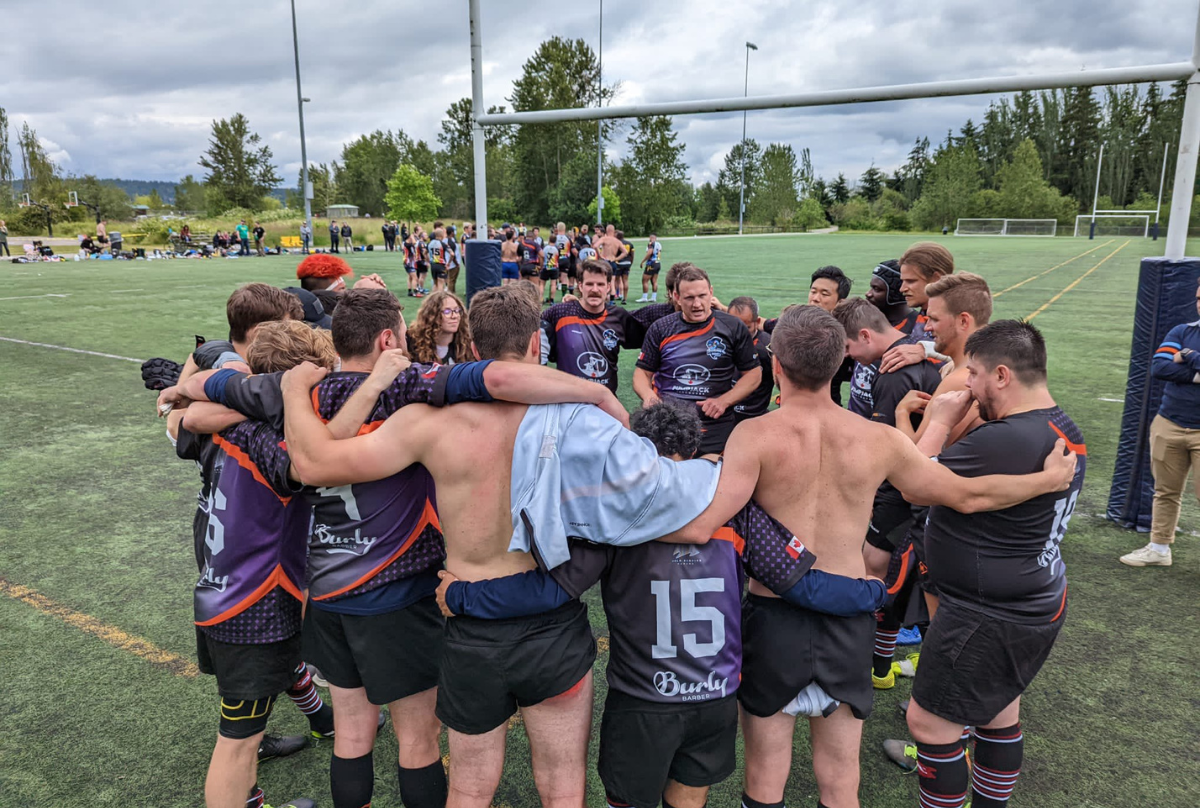 The Rogues are an important part of the Rugby community in British Columbia. For Leo, the Club has provided an environment to combine two passions: playing Rugby and a stronger introduction into the LGBTQ+ community.

“For me, at a younger age, it would have meant the world knowing that a Club like this existed,” Leo said. “Not just for Rugby, as that was never part of my childhood, but I did fall into a trap in identifying being queer as being less likely to succeed in sport. I hope that people can look at our team and see what we are doing, how we’re getting better and learning the sport. It’s incredibly important to oneself to be aware of their sexual orientation and to be proud about it. It shouldn’t be a barrier to all the things you want to do in your life.”

Leo continued: “Rugby is a tough sport, and there is still a misinterpretation that gay people are not physical. There are many lazy tropes that are thrown our way. Our Club gets to be a counterpoint to that narrative. And we have a good number of straight players at the Club who appreciate the openness and the positivity we have. That’s an important aspect.”

“The Bingham Cup is going to be a really big celebration of the open, inclusive side of Rugby. It’s such a cool idea to have a tournament of this scale in Canada. We’re going to be there representing BC, and every team there is going to have a like-minded people that want to play hard, fast Rugby and then having fun off the field afterwards, win or lose.”

The Rogues, says Leo, have changed his life. Not just for creating an environment to feel welcome, but also acting as a catalyst for important conversations. Leo and his friend from Touch Rugby were recently talking about Nick McCarthy, a professional Rugby player for Leinster in Ireland, who came out publicly this week.

The conversation turned into a discussion about the need for public representation and creating awareness to change attitudes.

“Its important – we’re not quite there yet as a society, so there is a responsibility and there is something to gain about being public with it,” said Leo.

Last weekend’s trip down to Seattle to play the Quake, another gay and inclusive team that will be heading to the Bingham Cup, was a huge success. The Rogues played their most exciting game of Rugby to date; the forwards and backed linked together well to produce an impressive showing of running Rugby against a side that has been active for many years.

The team played with heart, soul and used the skills learned from BC Rugby coaches to secure an impressive 38-29 victory – a historic milestone for the Club that left Bastyovanszky proud.

Now, with the Bingham Cup on the horizon, it is time for the Rogues to put everything they have learned over the past year into practice. To go from nothing to representing BC on the international stage is quite the achievement.

“I don’t know what to expect but it’s going to be a really big celebration of the open, inclusive side of Rugby,” said Leo. It’s such a cool idea to have a tournament of this scale in Canada. We’re going to be there representing BC, and every team there is going to have a like-minded people that want to play hard, fast Rugby and then having fun off the field afterwards, win or lose.”