Seven champions were crowned at an action-packed 2022 BC Rugby Senior Club Finals, as hundreds of Rugby players and fans descended on South Surrey Athletic Park on Saturday.

The atmosphere was lively in the South Surrey sunshine as teams battled it out in perfect conditions.

Vancouver Thunderbirds made it a historic double for UBC as they were crowned Women’s Premier League champions following a thrilling headline match against Castaway Wanderers, with the UBC side running out 43-29 winners to lift the Gordon Harris Memorial Cup. Earlier, the UBC Thunderbirds Men’s team defeated Castaway Wanderers to lift the Rounsefell Cup in the Men’s Premier League Final sponsored by Onni.

Relive the action from Field 2 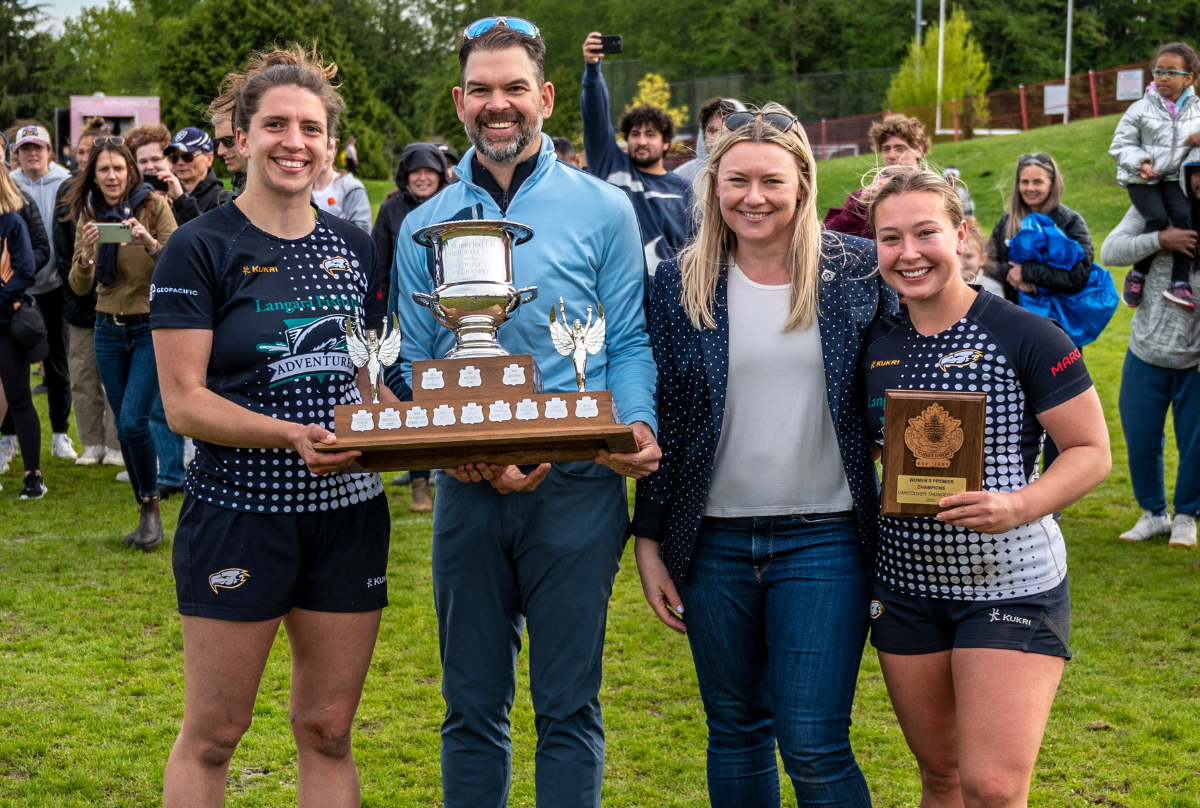 Vancouver Thunderbirds made it a historic double for UBC as they were crowned Women’s Premier League champions following a thrilling headline match against Castaway Wanderers, with the UBC side running out 43-29 winners to lift the Gordon Harris Memorial Cup.

Thunderbirds started strongly but were soon pegged back by a determined Castaway Wanderers side. However, the Thunderbirds soon took control with a flurry of tries to seize control.

Despite a brief Castaway Wanderers resurgence in the final stages, Thunderbirds stepped it up a gear in the last 15 minutes to close out victory and claim the Gordon Harris Memorial Cup. 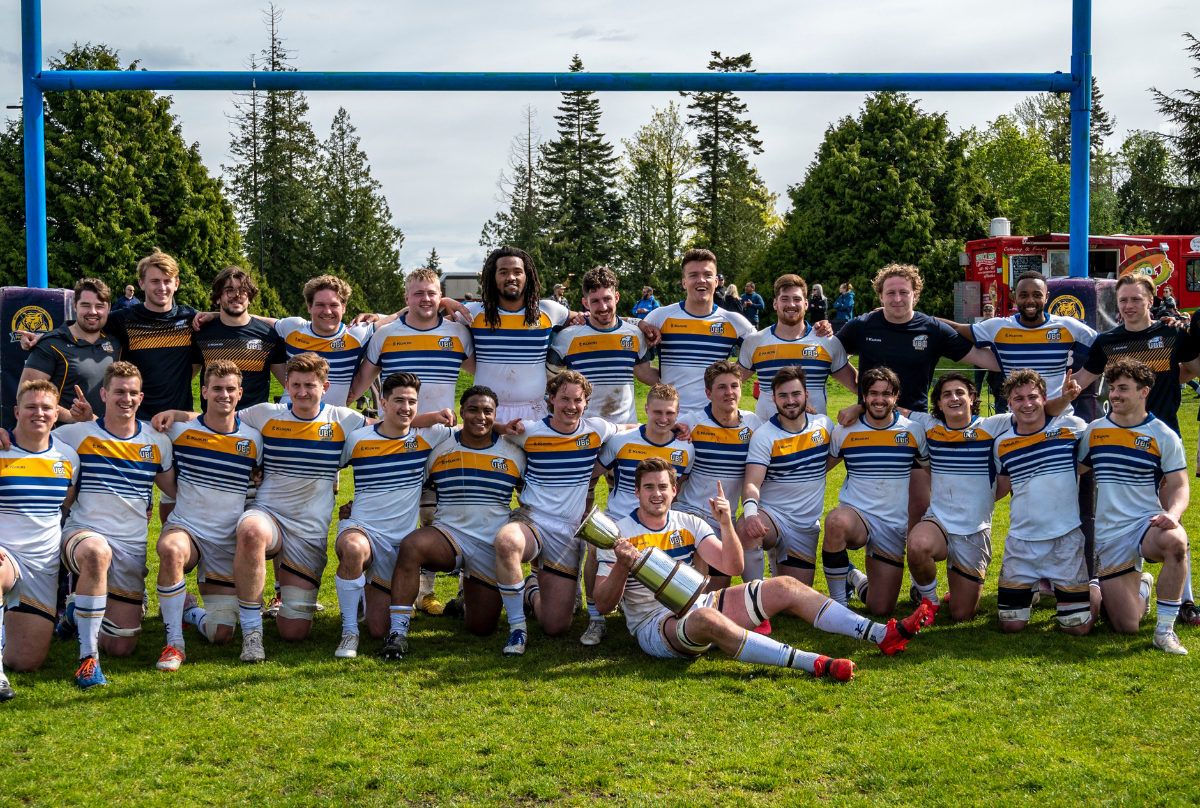 Thunderbirds got on the front foot in the early stages, moving into a comfortable lead before Castaway Wanderers hit back to take a 17-15 lead. However, UBC responded well in the second half to retake the lead before an untimely yellow card appeared to thwart their efforts. Castaway Wanderers scored twice with the advantage to inch ahead, but the action was far from over.

UBC composed themselves with three big tries inside the last 10 minutes to move clear and seal a memorable victory. 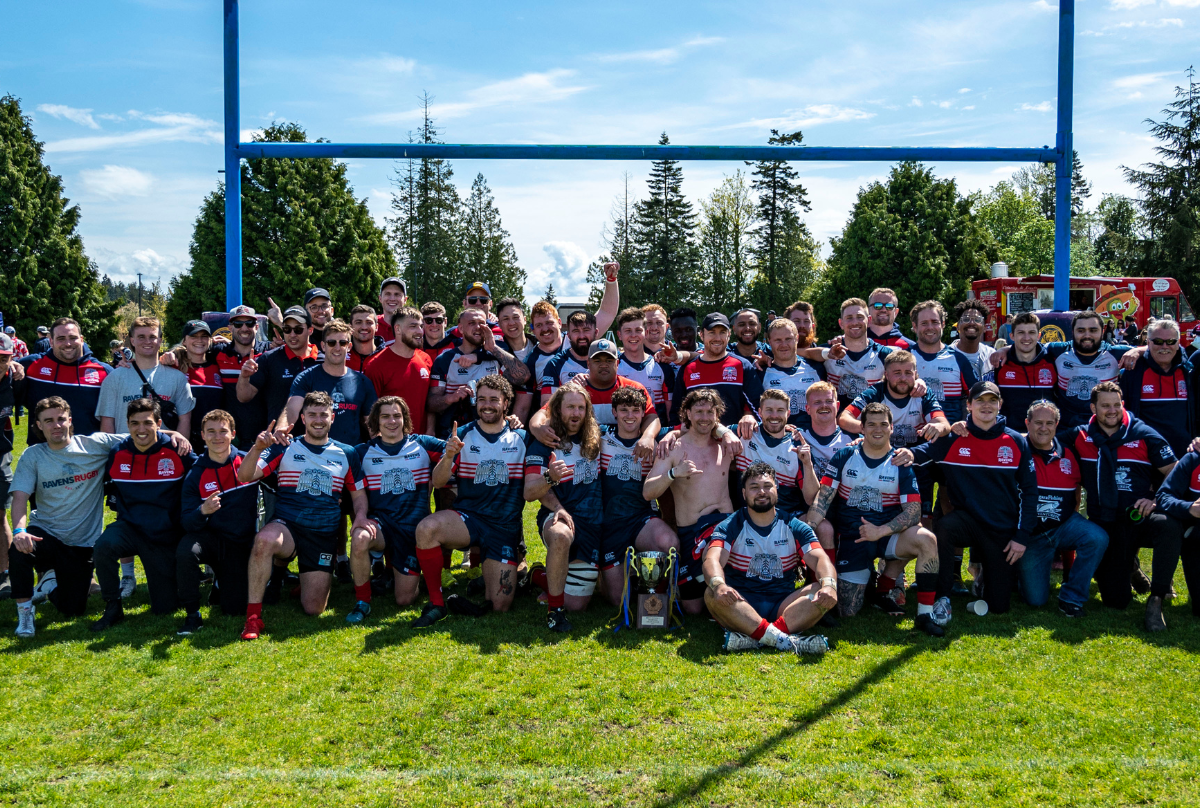 UBCOB Ravens finished the season on a high as home side Bayside Sharks RFC suffered a second final defeat on the day, with the Ravens running out 42-17 winners – despite finishing the match with only 13 men.

Ravens suffered a red card in each half but proved too strong for the well-supported Bayside team. The Ravens added gloss to an already convincing scoreline as the Sharks’ legs tired. Despite a late fightback after the second red card, Bayside could not find anything more in the tank as UBCOB Ravens saw out victory to clinch the 2022 Men’s Division 1 championship. 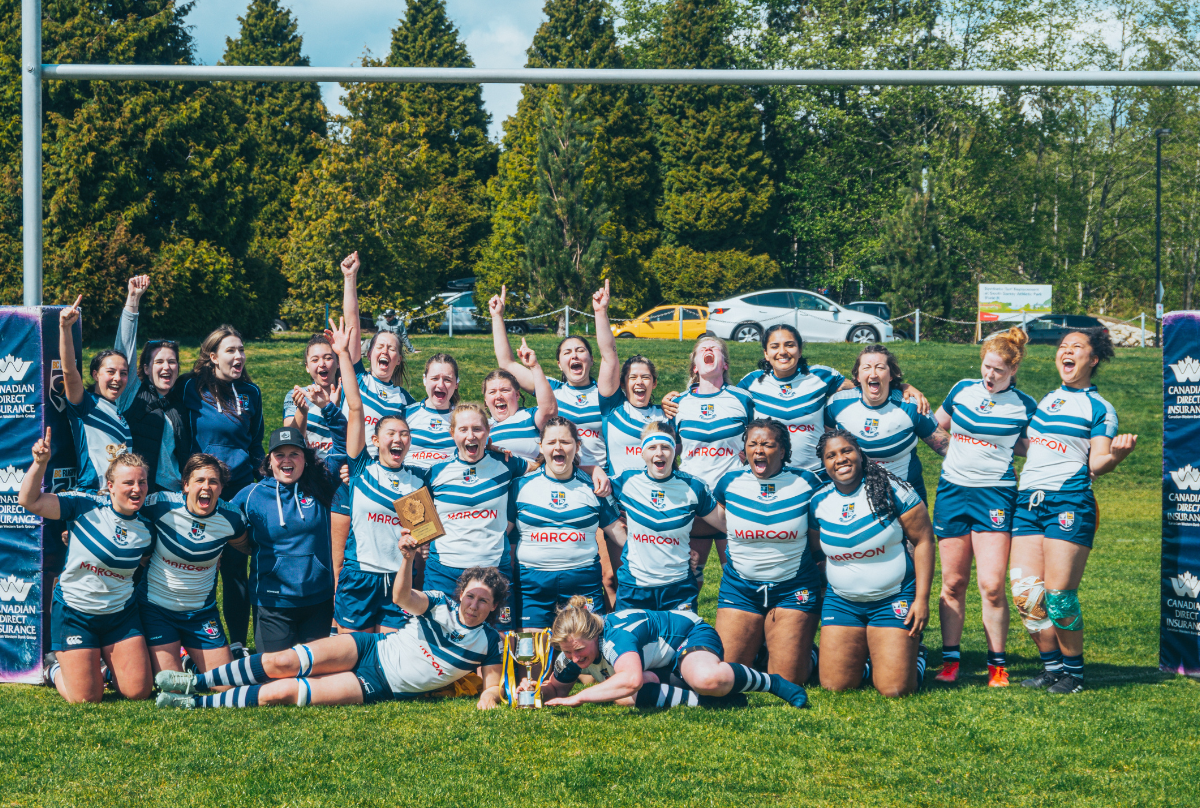 In arguably the match of the day, Burnaby Lake RFC produced an astonishing comeback to lift the Women’s Division 1 title against the favorites Cowichan.

Cowichan, who topped the division going into the play-offs, saw a big lead slip as Burnaby Lake rallied to overcome a 20-point deficit and lift the trophy on Field 1.

As the final whistle blew, the Burnaby Lake contingent were in rapture on the sidelines as their team sealed an epic comeback in front of a packed crowd. 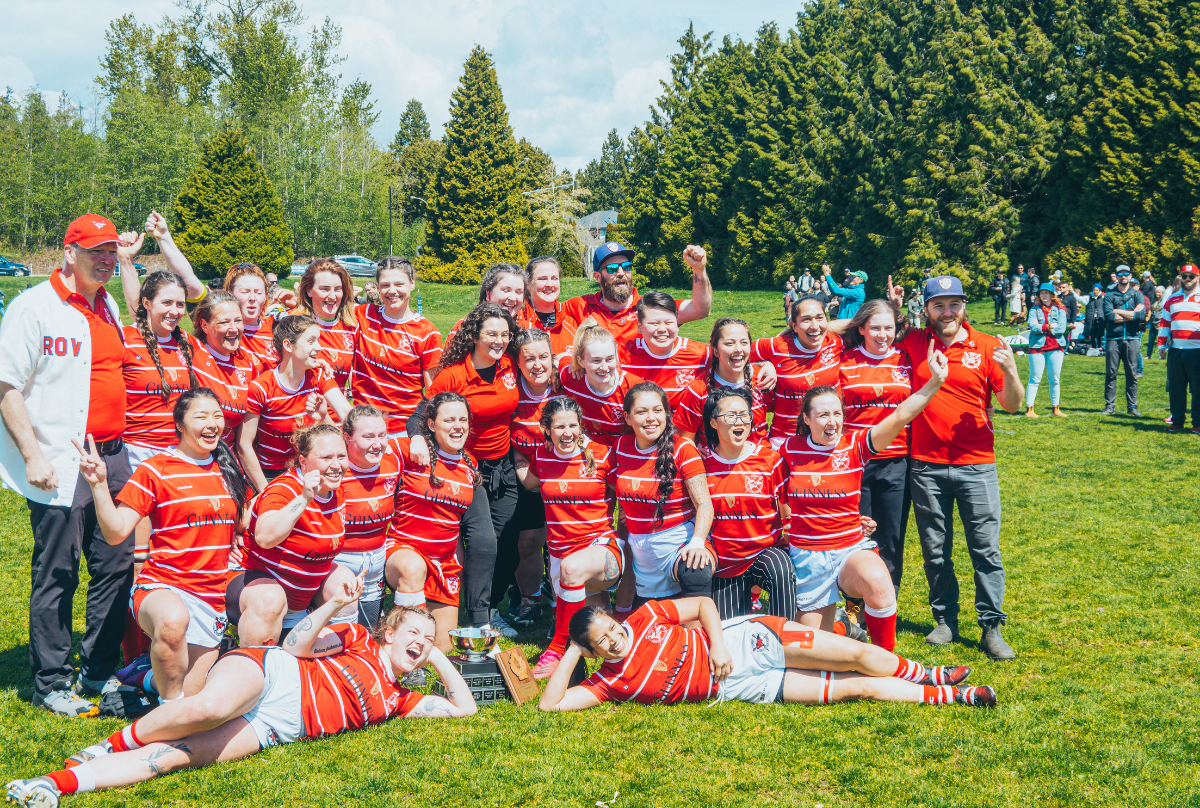 The action came thick and fast as the Rowers moved into a dominating position, taking control in the early stages. Rowers showed excellent speed and composure to see off the Langley threat with a series of tries.

Langley remained spirited throughout, scoring two tries to get on the scoreline, but the Rowers were simply too strong throughout and captured the 2022 Women’s Division 2 title in style. 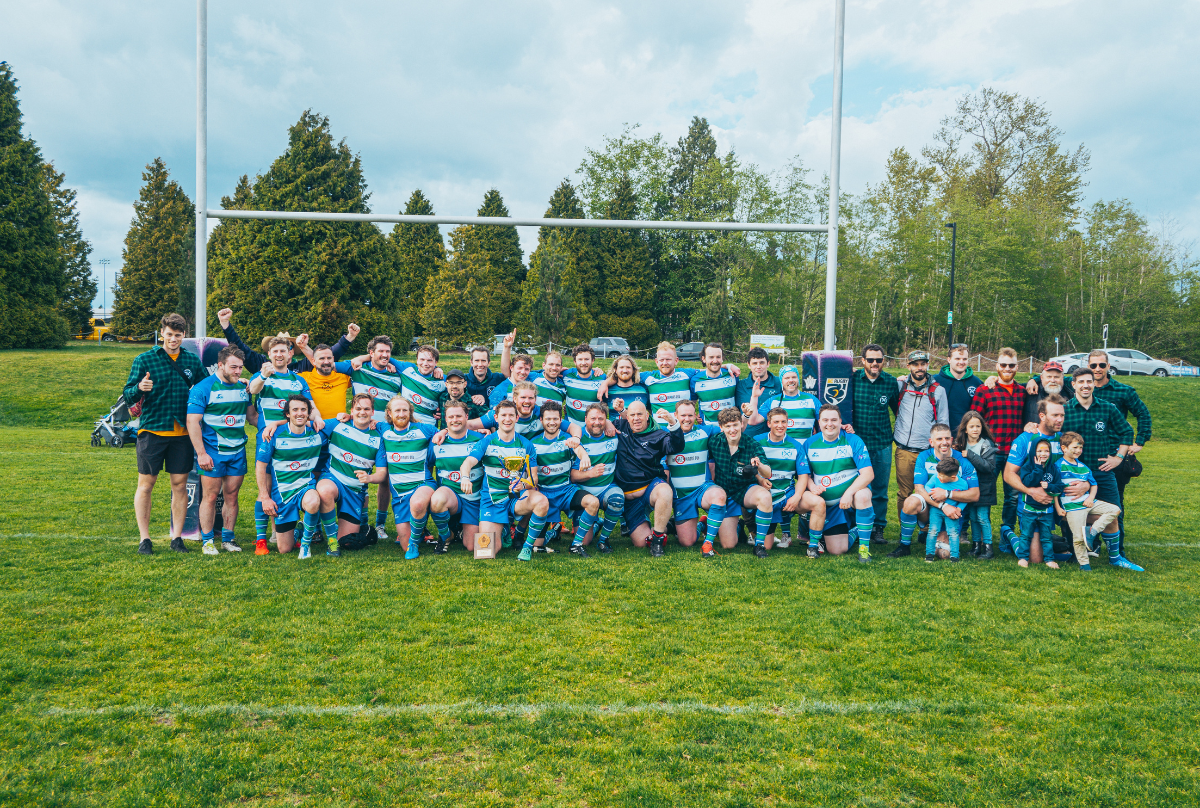 Both teams showed incredible grit and determination in a nip-and-tuck affair, before Axemen held firm to lift the Men’s Division 2 title.

Despite being buoyed by a strong Surrey contingent in the crowd, the Beavers found it tough to break through their opponents’ strong backline after a bullish first half.

Axemen RFC fought hard for their victory ensuring there will be plenty of celebrations as the Men’s Division 2 trophy heads to Squamish. 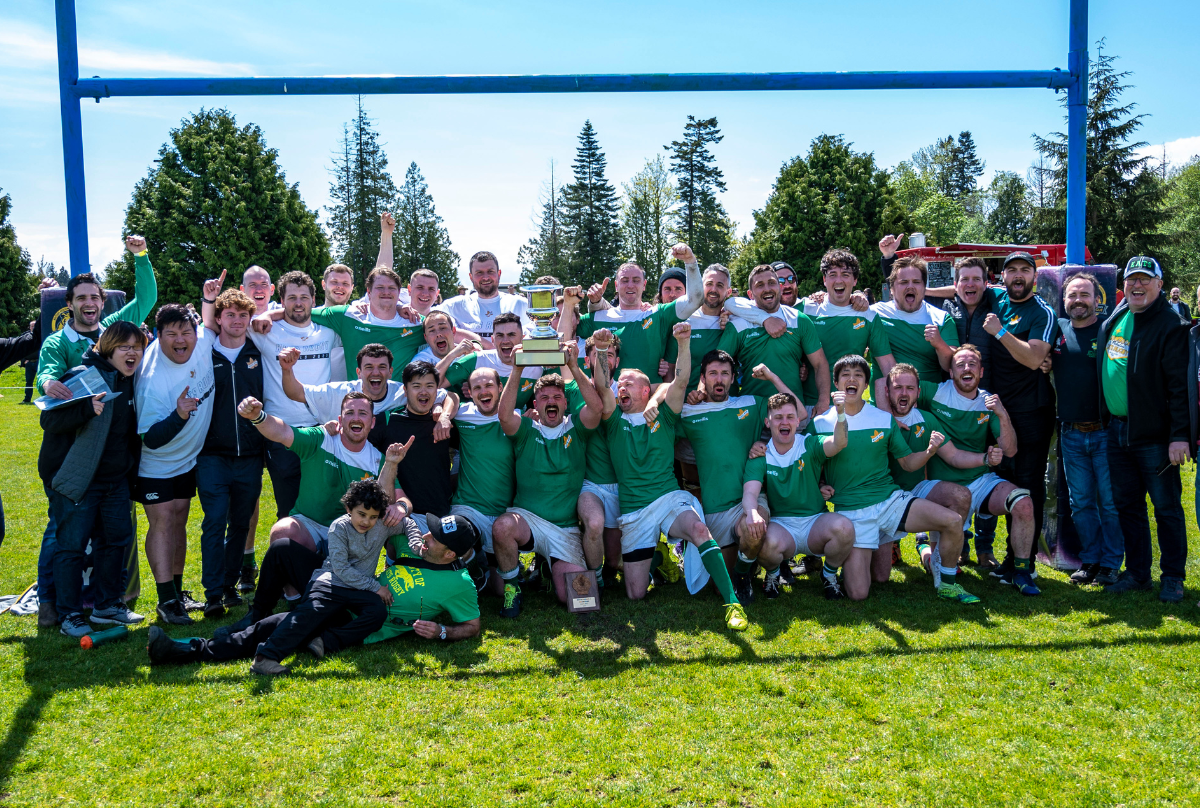 In glorious sunshine, the first silverware of the day went to Kats RFC after a thrilling end-to-end encounter against home team Bayside Sharks RFC.

Kats RFC took the lead with two early penalties and a try before an explosive second half saw Bayside hit back with two tries to edge ahead, sending the home crowd wild. However, Kats RFC recovered with a stunning late try in the corner to take a one-point lead in the final minutes.

Bayside pushed hard into the final seconds but the Kats RFC defence held firm, before they scored late to add gloss and be crowned 2022 Men’s Division 3 champions.