The last stretch to the 2022 BC Rugby Senior Club Finals begins on April 23!

The final round of regular season fixtures now played, close to 30 Clubs have booked their spots in the BC Rugby Senior League Playoffs with some mouth-watering clashes coming up over the next few weeks.

Playoff seedings have been confirmed across most of the seven BC Rugby Senior Leagues, including the Men’s Premier League sponsored by Onni. However, a handful of placings are yet to be decided in Men’s Division 1. This division awaits a final regular season match to be played this week after being postponed earlier in the season.

The 2022 BC Rugby Senior Club Finals take place at South Surrey Athletic Park on May 7.

Below are confirmed seedings throughout each league and the state of play in leagues still to be determined. 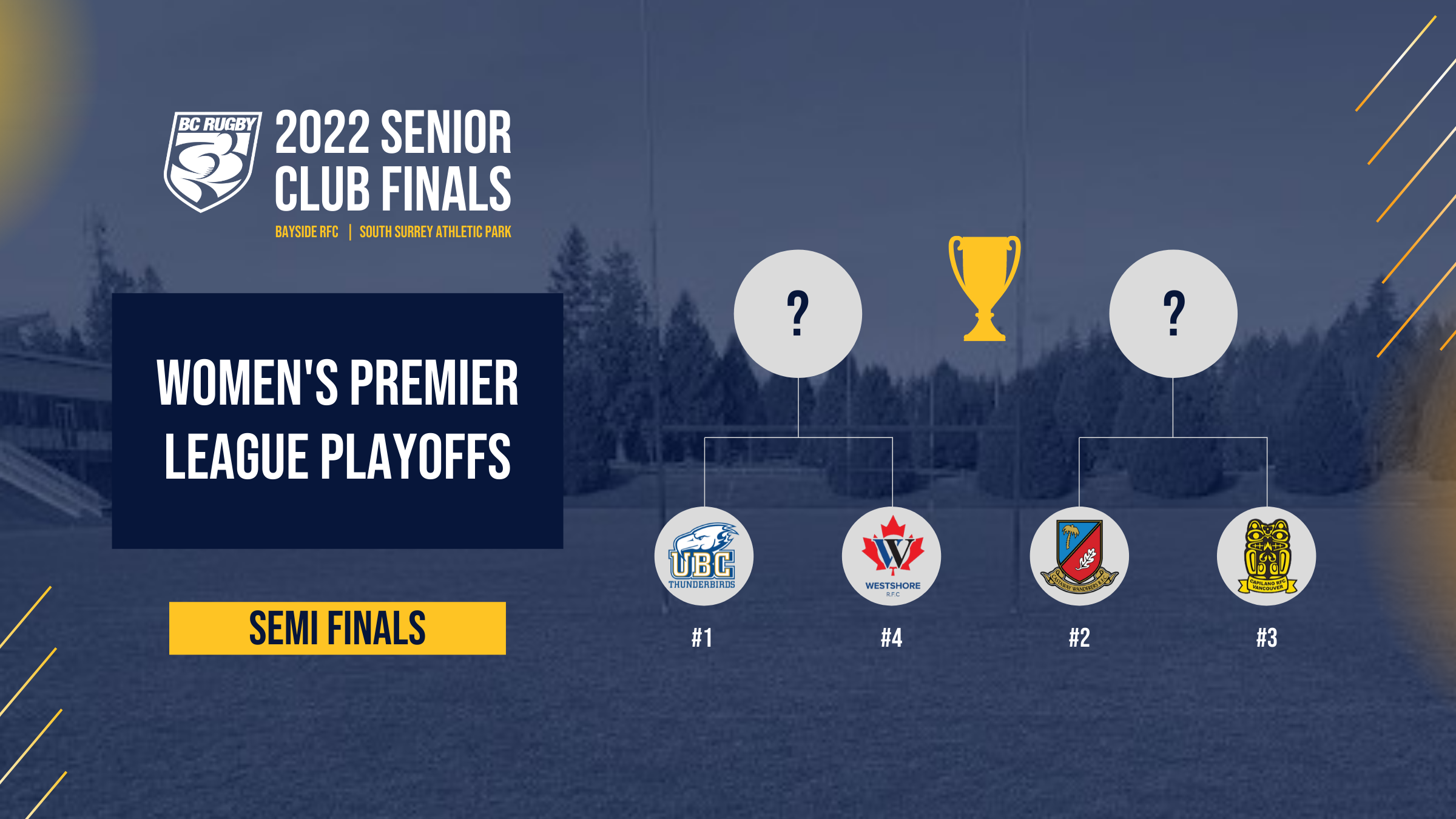 The final standings of the Women’s Premier League have been determined with semi-finals set to take place on April 23.

Castaway Wanderers clinched the #2 spot and will host #3 seed and 2019 Champions Capilano RFC in the second semi-final. Winners of each semi-final will have two weeks to prepare for the Championship match on May 7. 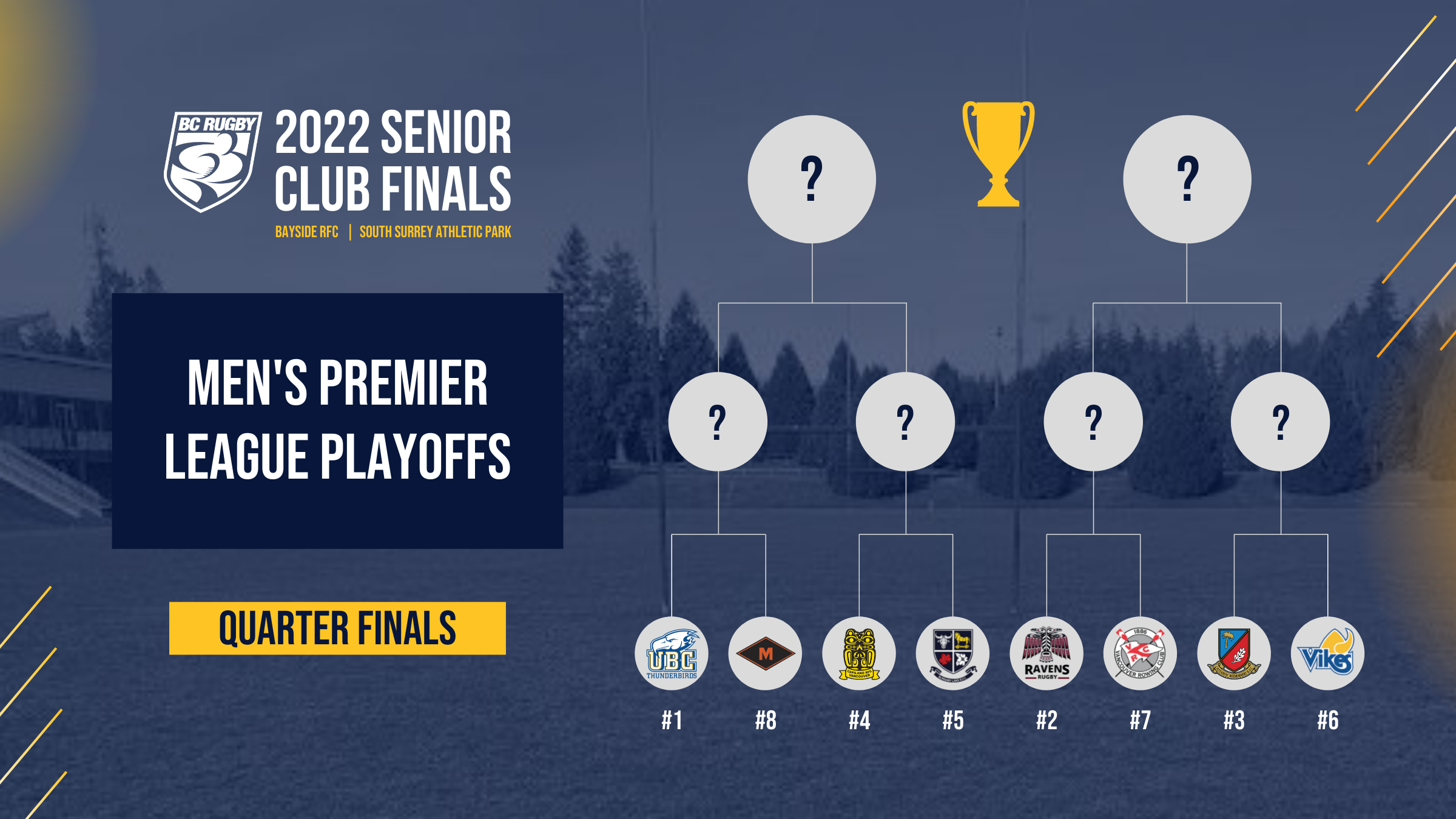 The Men’s Premier League sponsored by Onni features four entertaining quarter-final match-ups, with all to play for.

#1 seed UBC finished its regular season unbeaten and received a bonus point win in every game they played. UBC will host #8 seed Meraloma, who clinched a Playoff spot on the final day of the regular season.

Defending champions UBCOB Ravens are seeded #2 and will host Vancouver Rowing Club in their quarter-final. The Ravens are aiming for a hat-trick of Premier League titles having won in 2018 and 2019.

Ending the season with a three-match winning streak, the #6 seed UVIC Vikes will head to neighbours #3 seeds Castaway Wanderers for their quarterfinal at Windsor Park. Alongside the Women’s Premier League semi-final, this will be a bumper day for Rugby on the Island.

The #4 seeds Capilano RFC hosts #5 Burnaby Lake RFC in what is the tightest clash of the playoffs. The long-time rivals played out a tense regular season game, with Burnaby Lake prevailing 21-19. 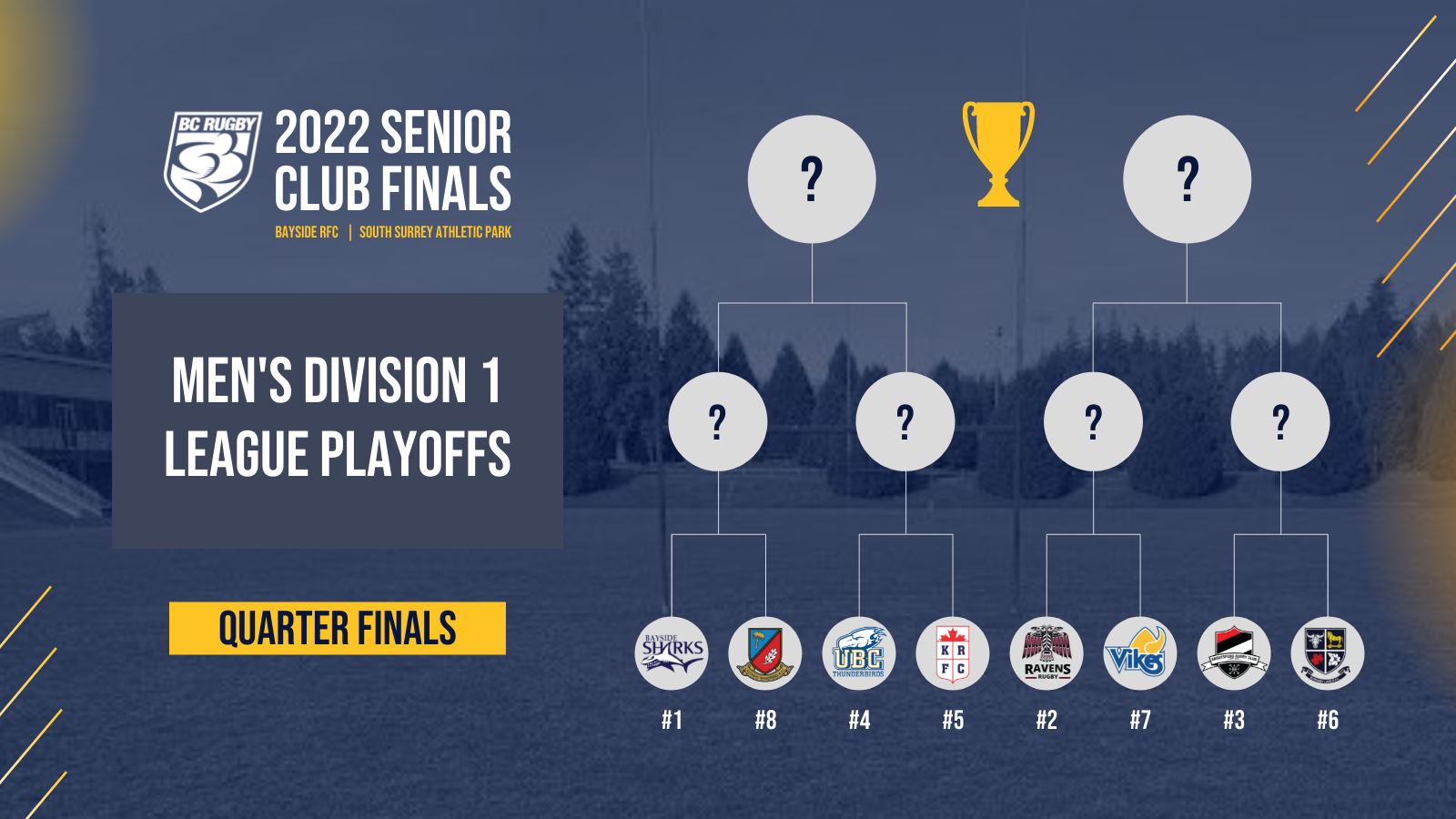 The top four seeds have been confirmed, with #1 seed and 2019 Division 1 champions Bayside Sharks RFC clinching top spot thanks to a single bonus point. #2 seeds and 2019 Premier Reserve League champions UBCOB Ravens also get a home quarter-final, pairing up for a big day alongside their Men’s Premier League team.

#3 seeds Abbotsford RFC will host their quarter-final at Exhibition Park, while #4 seeds UBC are also guaranteed a home quarter-final alongside their Men’s Premier League team.

As things stand, Burnaby Lake RFC are ranked #5 with UVIC Vikes at #6, Kelowna at #7 and Castaway Wanderers at #8. However, final placings depend on the result of Kelowna’s make-up match against Kamloops RFC. 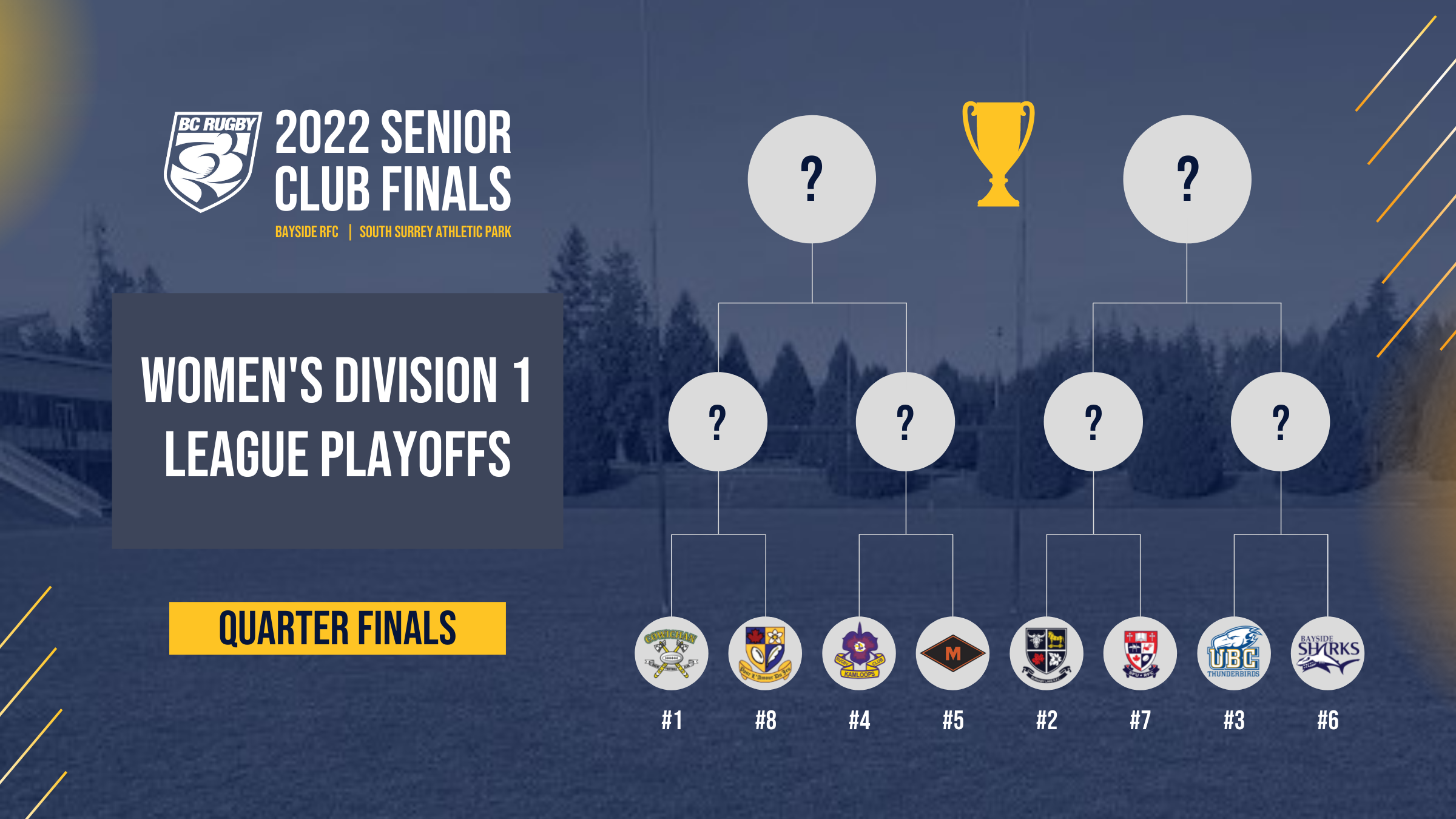 Cowichan secured top seeding winning all seven of their regular season games with a bonus point. The #1 seeds will host #8 seeds Scribes, who clinch the last playoff spot.

#3 seed Vancouver Thunderbirds hosts #6 seed Bayside for their quarterfinal, while #4 seed Kamloops have a home quarter-final against #5 Meraloma. 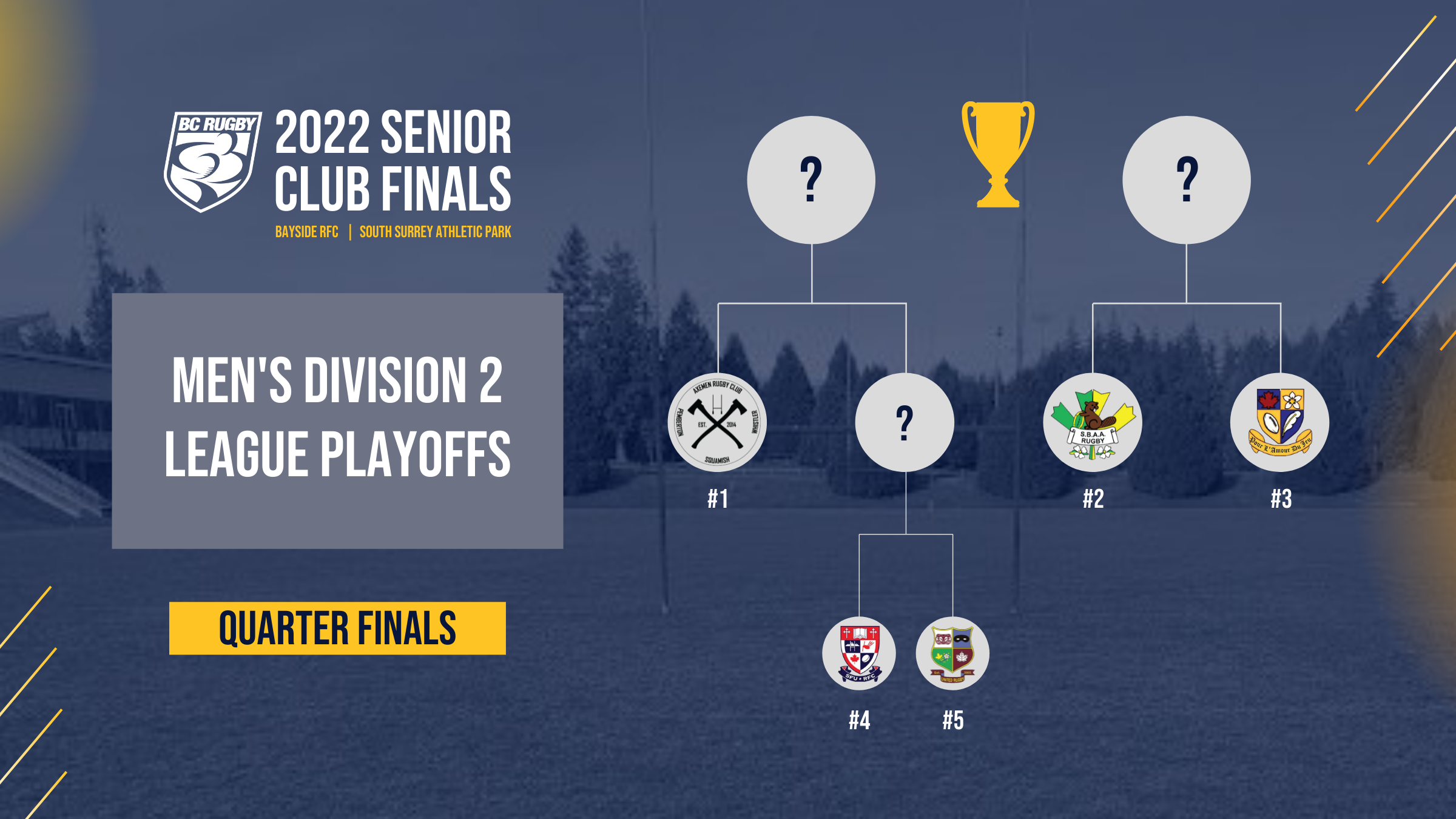 With only one quarter-final to be played, #4 seeds SFU hosts #5 United RFC with the winner taking on top-seeded Axemen in the semi-finals. SFU and United played twice during the regular season, with United claiming victory on both occasions.

#2 seeded Surrey Beavers RFC will host #3 seed Scribes in the second semi-final, with the winners advancing to Championship match on May 7.

TWU is not participating in the Playoffs. 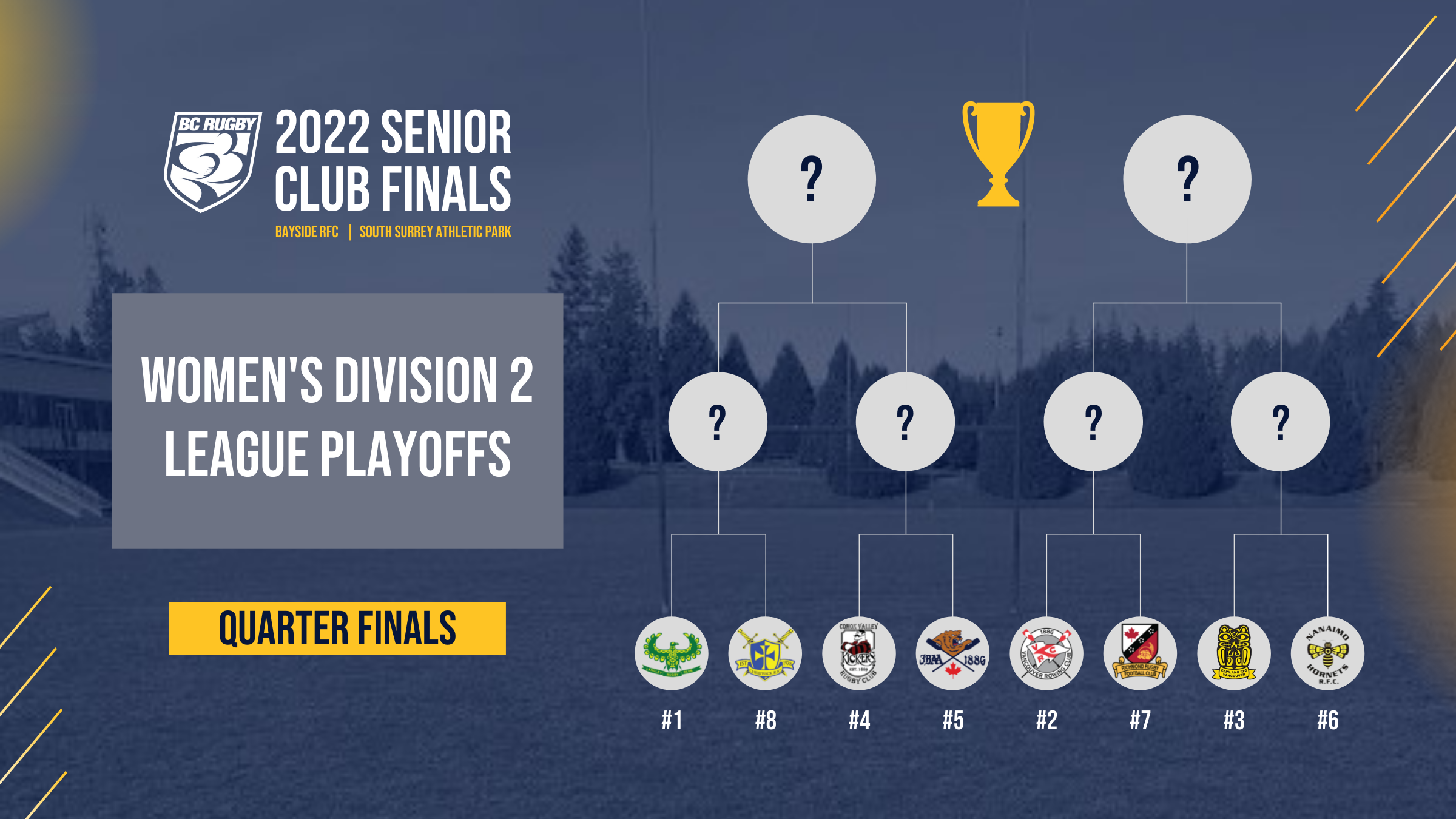 With all eight teams making the Playoffs, #1 seeds Langley take top spot having won all six of their matches with a bonus point from each. They face newcomers #8 Chilliwack in the quarter-final.

The final quarter-final is an all-Island affair, with #4 seeds Comox taking on #5 seeds James Bay AA. Comox defeated James Bay AA in the opening week of the regular season. 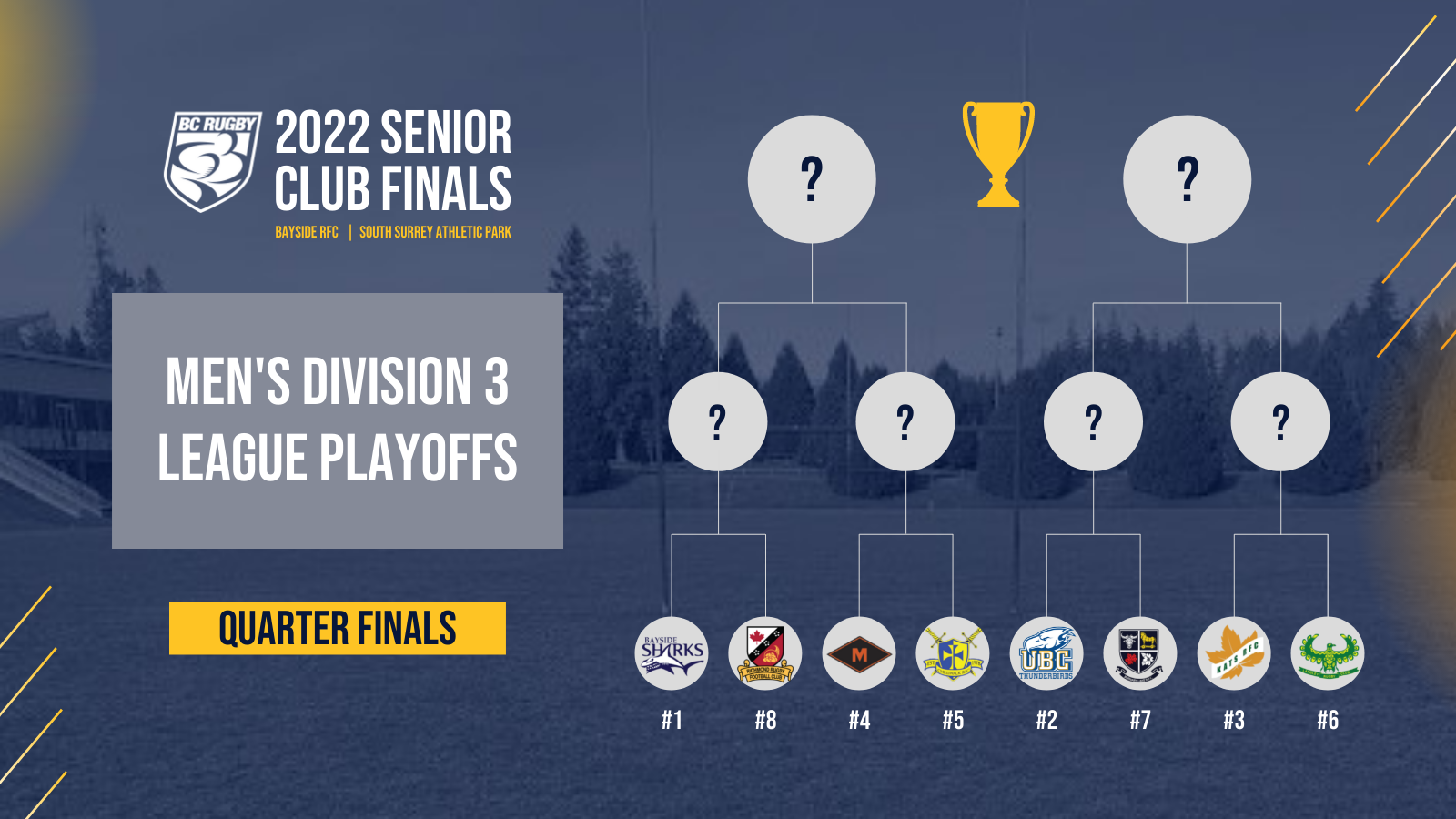 With the Axemen vs. Kats make-up match not happening, the eight seedings have now been confirmed for the Men’s Division 3 quarter-finals.

With Castaway Wanderers dropping out of the play-offs, Richmond RFC moves into #8 seed.

Bayside, UBC, Kats and Meraloma are all guaranteed home quarter-finals. Top seeds Bayside RFC only missed out on two bonus points all season.

With Castaway Wanderers dropping out of the play-offs, Richmond RFC moves into #8 seed to face Bayside RFC.

Sign Up Now For Free Girls Can Rugby Tryout in Fernie!