A bumper crowd of 33,444 enjoyed the 2022 HSBC Canada Sevens Vancouver at BC Place over Easter weekend as BC enjoyed strong representation on and off the field.

Canada’s Men’s Sevens team returned to action in front of a home crowd in Vancouver, as Rugby fans in British Columbia were once again treated to two days of world class Sevens Rugby.

There were plenty of fans sporting BC Rugby Club colours in their seats – and some excellent costumes on display! 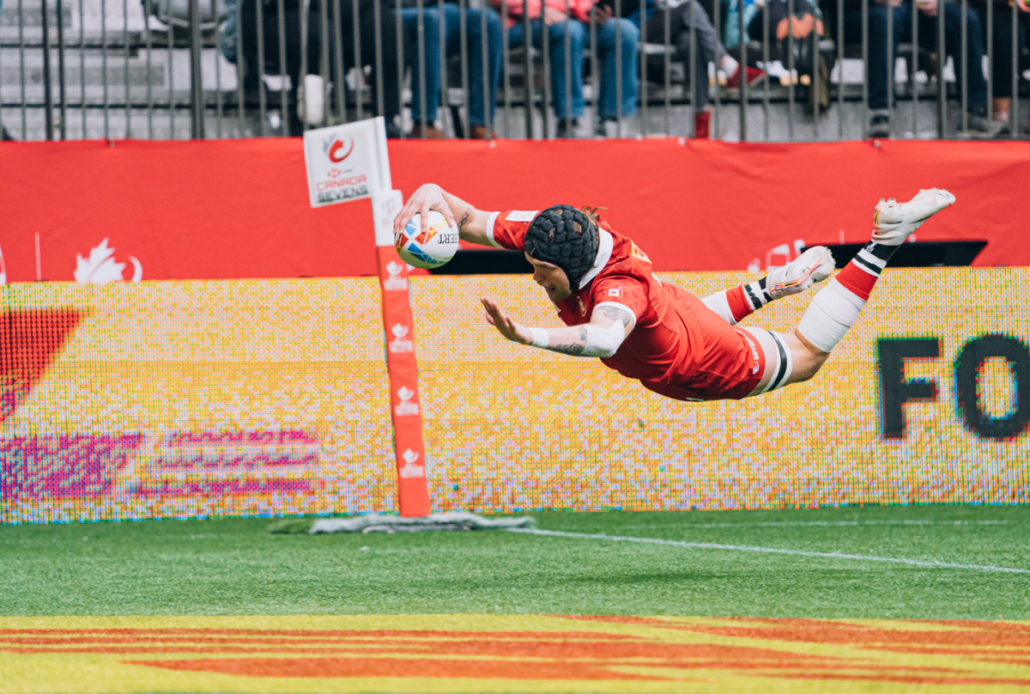 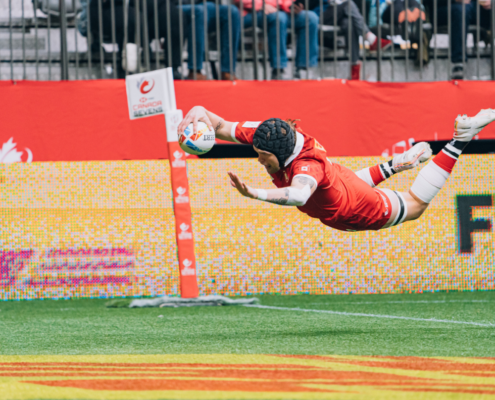 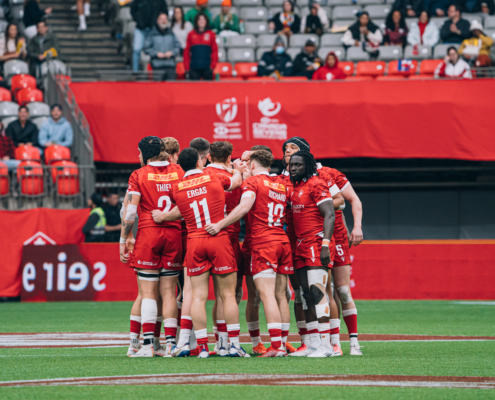 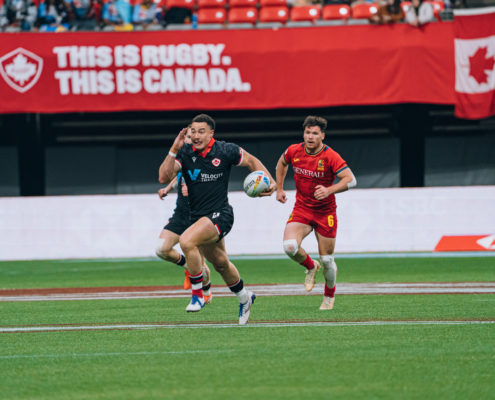 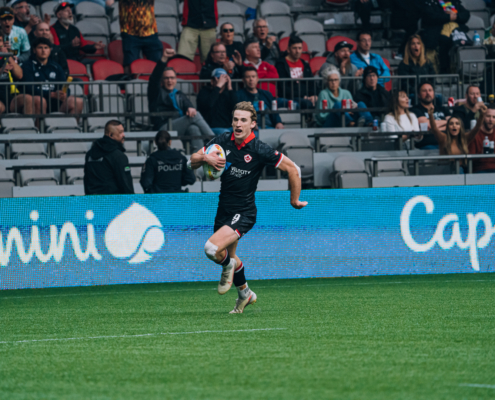 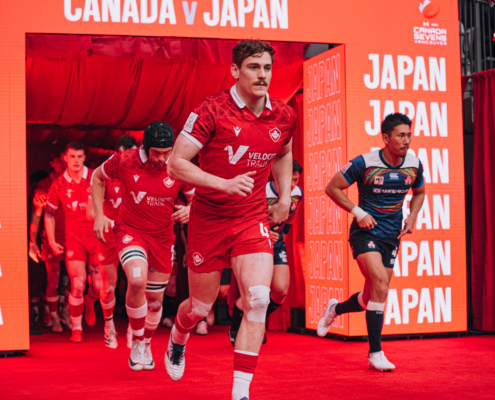 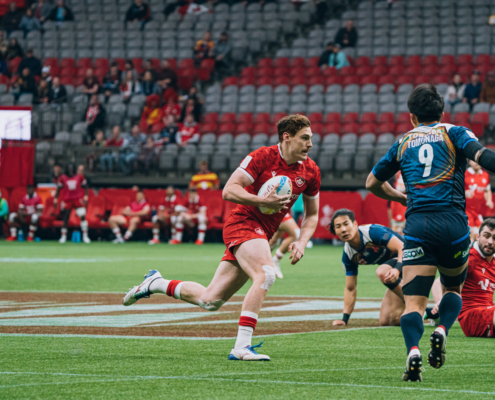 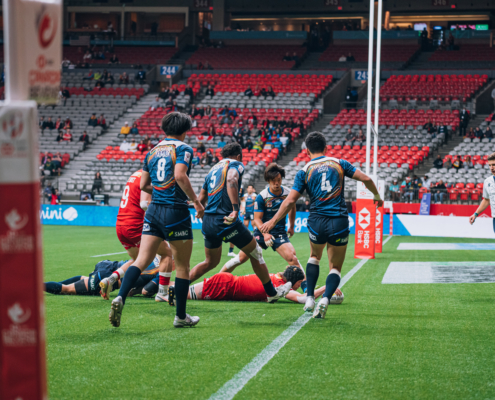 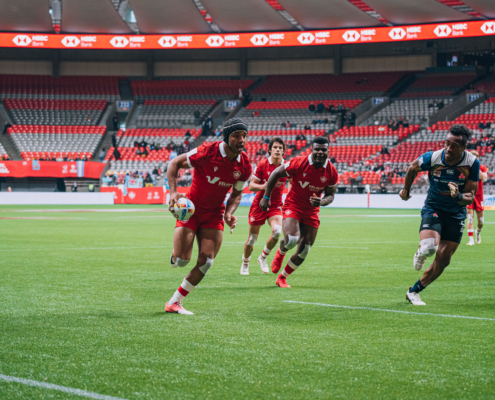 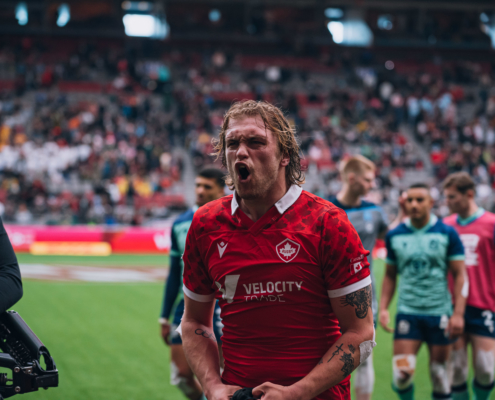 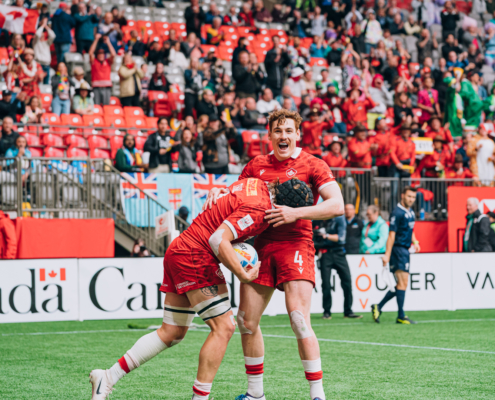 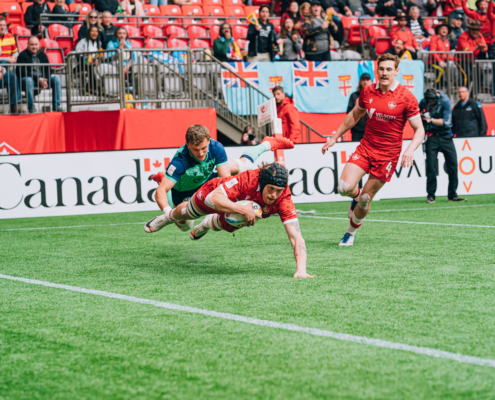 Canada’s Men’s Sevens team was drawn in Pool C alongside South Africa and Australia, the top two teams of the 2022 HSBC World Rugby Sevens Series, as well as Spain.

Canada started brightly in its opening match against Australia on Saturday, moving into a 10-0 lead thanks to tries from Alex Russell and Abbotsford RFC’s Jake Thiel. However, Australia hit back with four unanswered tries and three conversions to take a 27-10 victory.

The home team fell just short against the Series leaders South Africa in their second match, showing great spirit to come back from a 12-0 deficit before falling to a 19-14 loss to the Springboks. David Richard and Cooper Coats scored Canada’s tries, with Coats adding the extras with two successful conversions.

However, Canada closed out Saturday in style with a 26-21 victory over Spain to delight the home crowd. Tries from UBC’s Elias Ergas, University of Victoria Vikes’ Brennig Prevost, David Richard and Brock Webster secured third place in Pool C for Canada and ensured fans left BC Place smiling!

Abbotsford’s Thiel scored a crucial try in the ninth-place semi-final with Scotland as Canada closed out another impressive win. Brock Webster (2) and Alex Russell both scored tries to the home crowd’s delight as Canada earned a 26-22 win to advance to the ninth-place final against Ireland.

Despite a spirited performance by the home side, Canada ultimately fell short in the play-off as Ireland secured a 17-7 victory. Victoria’s Ngongo was Canada’s try scorer, with Cooper Coats adding the extras. Canada finished in 10th position.

Day 2 of #Canada7s' return to BC Place was a smashing success! 💥 Thank you fans for supporting 7️⃣ years of Sevens with us. We'll see you again in 2023! 🔥

Sign up to our newsletter for all future updates 👉 https://t.co/BDuDdo4UkH!#HSBC7s pic.twitter.com/V0tW79Aicf

BC OFFICIALS GET EXPERIENCE ON WORLD STAGE

It wasn’t just the players impressing the Vancouver crowd this past weekend. 11 BC officials were part of the officiating team at the HSBC Canada Sevens Vancouver.

Club COVID-19 Safety Officers enjoyed a special acknowledgement at the HSBC Canada Sevens Vancouver on Saturday, as their efforts over the past two years were recognized at BC Place.

Many of the Club COVID Safety Officers were in attendance for this weekend’s action and, on Saturday, their hard work and dedication was recognized on the pitch. Their work throughout the pandemic ensured a safe environment for all our players, coaches, officials, staff, supporters, and volunteers.

Over the past two years, Rugby was able to continue safely thanks to over 100 volunteers that took on the role of COVID Safety Officer for their local BC Rugby Club.

The COVID Safety Officers played a crucial role in getting Rugby back up and running throughout the pandemic, generously giving up their time to offer their community a safe, fun outdoor activity.

They took on huge responsibility with unknown risks when the stakes were high. As conditions changed, these individuals helped steer Rugby through the unknown. Without their tireless efforts, Rugby in BC would not be in the position it is today with over 5,000 players registered throughout the province.

Thank YOU – we sincerely appreciate the time you dedicated to keeping Rugby safe. 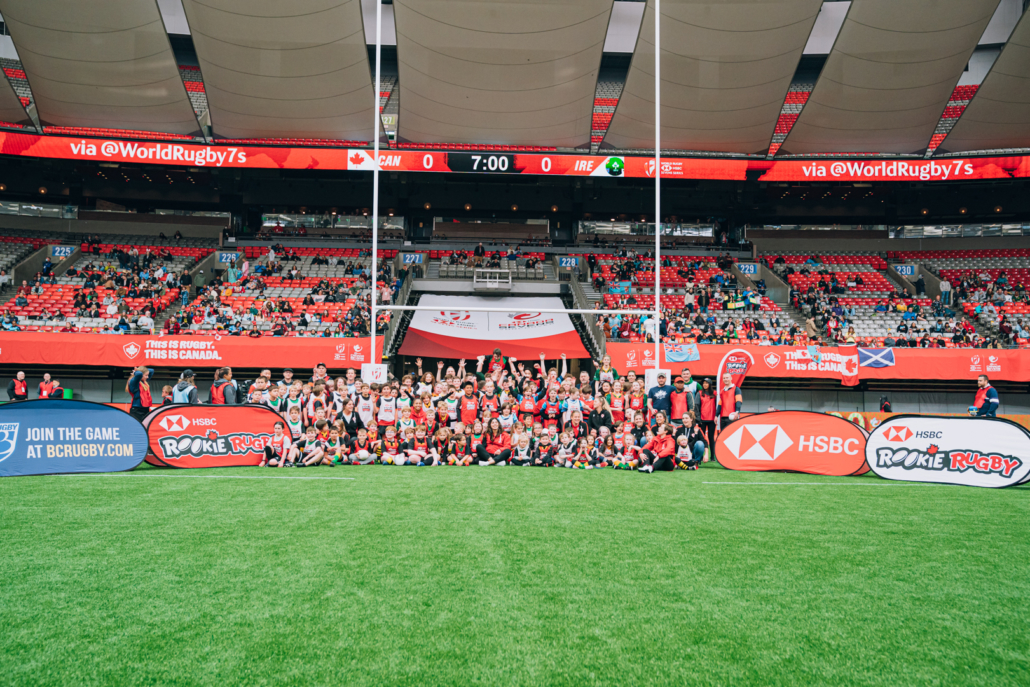 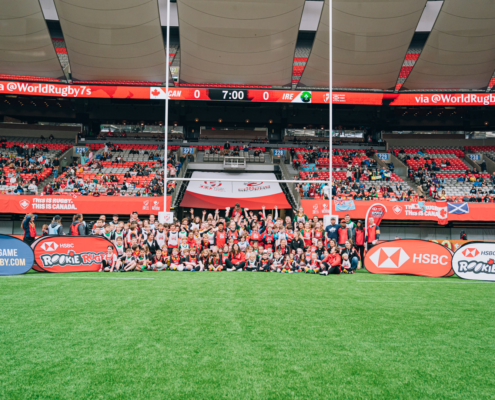 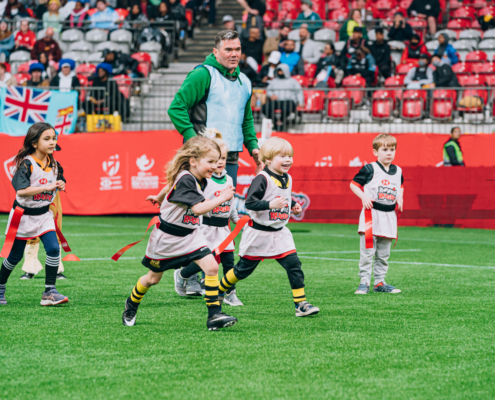 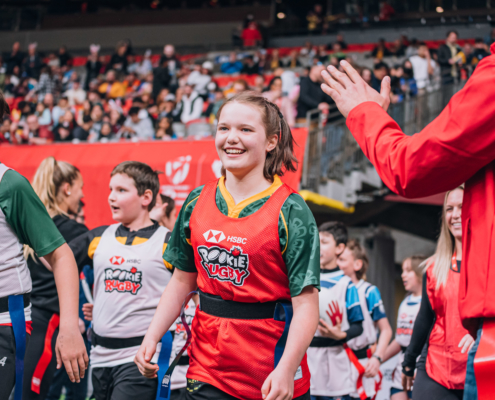 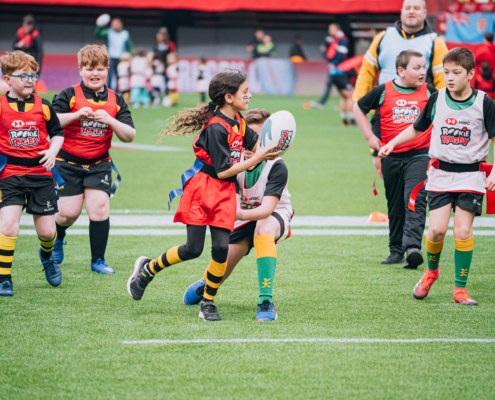 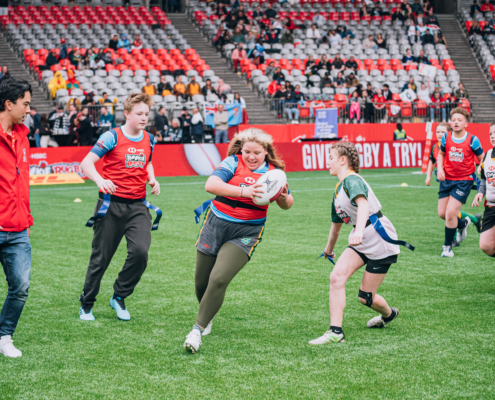 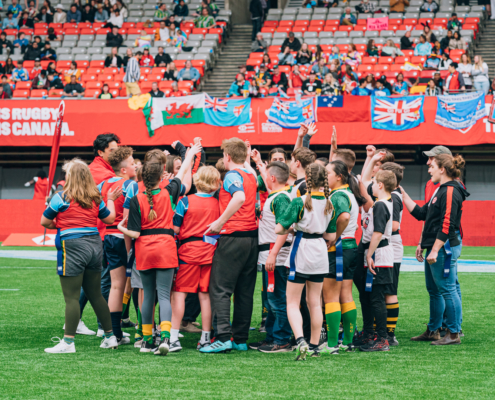 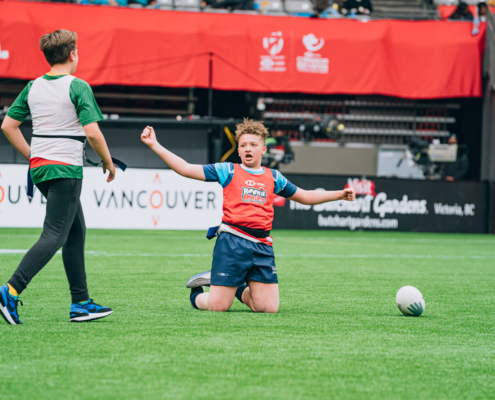 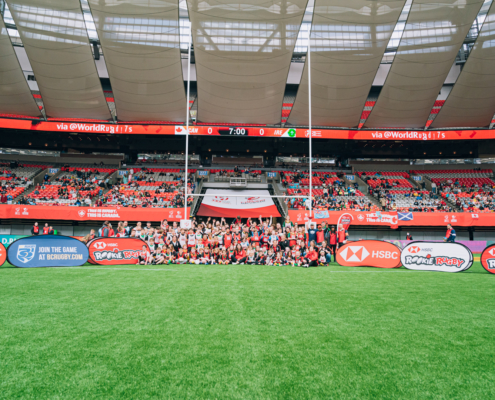 Joined by HSBC Ambassadors and former BC Rugby stars such as Nate Hirayama, children from four BC Rugby Clubs got to mimic their favourite players on the pitch before Canada’s ninth-place showdown with Ireland.

BC’s Club Rugby scene was on display as the HSBC Rookie Rugby Ball Carriers delivered the match balls to the centre of the pitch during Sunday’s action.