The total jackpot for the HSBC Canada Sevens Vancouver 50/50 Draw presented by Grosvenor was $105,220 with the winning ticket holder taking home half!

BC Rugby has contacted the winning ticket holder. 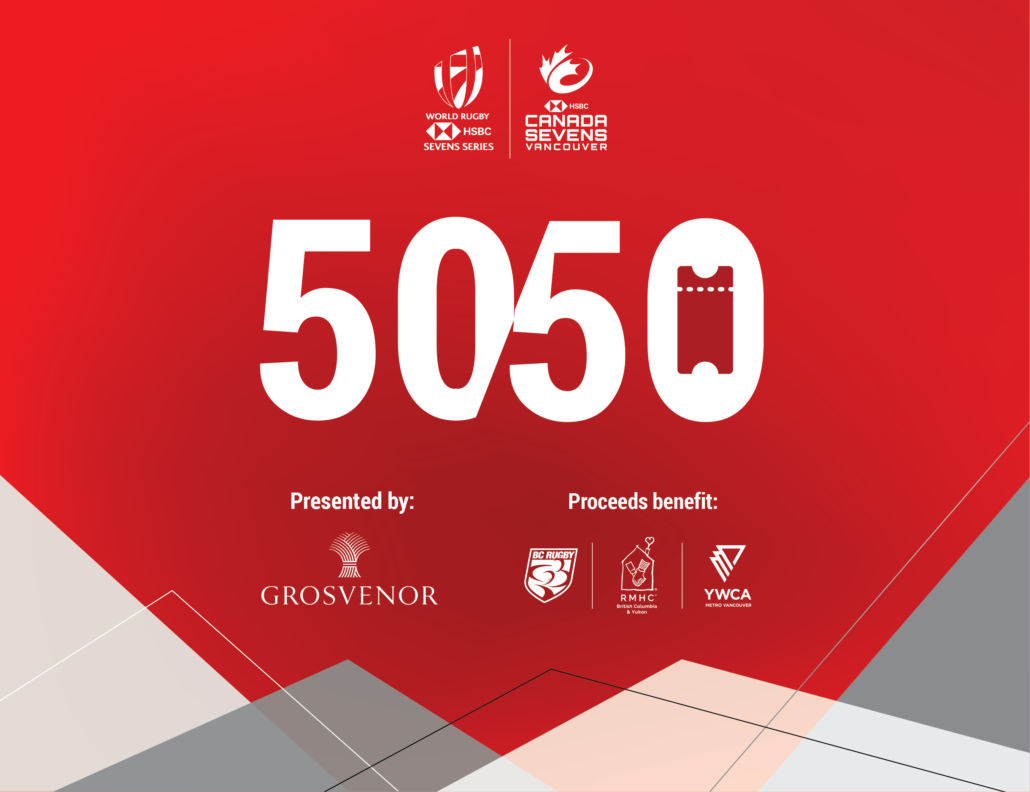 The HSBC Canada Sevens Vancouver 50/50 Draw presented by Grosvenor was in support of BC Rugby, Ronald McDonald House BC & Yukon and YWCA Metro Vancouver.

As Rugby returned to Vancouver’s BC Place on April 16-17, the HSBC Canada Sevens Vancouver 50/50 Draw presented by Grosvenor aimed to raise substantial funds to help make Rugby accessible and enjoyable for all in BC, provide vital support to the families of seriously ill or injured children, and fund the building of much-needed safe housing­ for women and children in Burnaby.

Entering year six of their partnership with the HSBC Canada Sevens and building on their strong commitment to the community, Premier Partner Grosvenor returns for the second year as Presenting Partner of the 50/50 draw. “Ronald McDonald House is an organization that is very close to our hearts. The dedicated staff and the families who live there are inspirational,” said Michael Ward, Senior Vice President and General Manager for Grosvenor’s Vancouver office. “We’re also thrilled to support the YWCA who set incredible foundations for women and families across the region.”

BC Rugby CEO Annabel Kehoe said: “We are honored to be partnering with Ronald McDonald House BC & Yukon and YWCA Metro Vancouver on this fundraising drive. I know that Rugby fans throughout BC will help us to raise vital funds for three great causes.”

Ronald McDonald House BC & Yukon CEO Richard Pass: “We’re very grateful for all the love and support the children and their families who stay at the House have received over the years from the HSBC Canada Sevens event. It’s a weekend filled with energy, excitement, community, and passion for the sport. We wish the participating teams the very best ahead of the event.”

Michelle Sing, Interim CEO of YWCA Metro Vancouver, said: “We are incredibly excited to be a first-time beneficiary of the HSBC Canada Sevens Vancouver 50/50 draw. All funds raised will support a new YWCA housing community in Burnaby, offering much needed safe and affordable homes to single mothers and their children.”

Purchased tickets will be entered into a randomized draw, with the winning ticket owner receiving half of the total jackpot. The other half of the jackpot will be used to grow Rugby throughout the province of British Columbia, provide support to the families of seriously ill or injured children, and fund the building of much-needed safe housing for women and children in Burnaby.

Actual odds of winning depends on the number of tickets sold. Tickets can be purchased by anyone 19+ and located within BC’s borders. Players do not have to attend the HSBC Canada Sevens Vancouver to buy tickets and be entered into the draw.

For more information on how to play, ticket sales and rules and regulations on the HSBC Canada Sevens Vancouver 50/50 Draw presented by Grosvenor, please click here.