BC Rugby is delighted to announce the BC Bears U18 and U16 Girls and Boys teams that will represent the province in the upcoming 2022 Western Championships in Kelowna, BC, on July 29-31, 2022.

The Western Canada Championships returns this year for the first time since 2019, as BC welcomes teams from Manitoba, Alberta, Saskatchewan, and the Pacific Northwest Loggers for three days of U16 and U18 Boys and Girls competition in the Okanagan.

Six teams will play in the new BC Navy and Gold colours at the tournament. In the U16 Girls Division, the BC Bears will face off against teams from Alberta, Manitoba and the Pacific North West Loggers. Two BC Bears teams feature in the U16 Boys Division with Blue and Gold sides taking on Alberta and Manitoba. The U18 Boys Division will also feature two BC Bears teams, with Blue and Gold rosters making up a five-team Division alongside Manitoba, Alberta, Saskatchewan. The BC Bears U18 Girls team take on Alberta and a joint Manitoba/Saskatchewan team.

Team selections have been made following successful BC Bears U16 and U18 Development Camps held at UBC’s Gerald McGavin Rugby Centre in Vancouver in July. Across four days, over 150 players from across BC took part in an array of drills, skill development challenges, team-building exercises and matches against the Washington Loggers to help coaching staff identify BC’s top athletes.

“The U16 and U18 Boys and Girls squads that will be competing at Westerns is full of talented and exciting young players with the potential to be representing BC Rugby and Canada for years to come. The competitiveness within these two age groups at PRCs has enabled us to select strong squads for each division that, long-term, will build depth for our Age-Grade and Canadian National Team Programs. This is a key step on that pathway and our goal is to give all these athletes a great Rugby experience in the Bears jersey to instil that pride and desire for playing and representing this province.” BC Rugby Technical Director John Tait

The purpose of the Western Canada Championships is to foster the growth of competitive Rugby and provide an important pathway step through best-on-best Age-Grade competition to develop athletes towards National Team honours.

The Championships aim is to provide an appropriate development stage of competition to motivate, challenge and inspire young players, as well as Coaches and Officials.

Action will take place at Parkinson Recreation Grounds in Kelowna on Friday, July 29 and Saturday, July 30, with the Championships concluding at the Apple Bowl Stadium on Sunday, July 31.

All scores, results and reports will be available on the BC Rugby website throughout the weekend. Please visit the 2022 Western Canada Championships page for more information and full schedule. 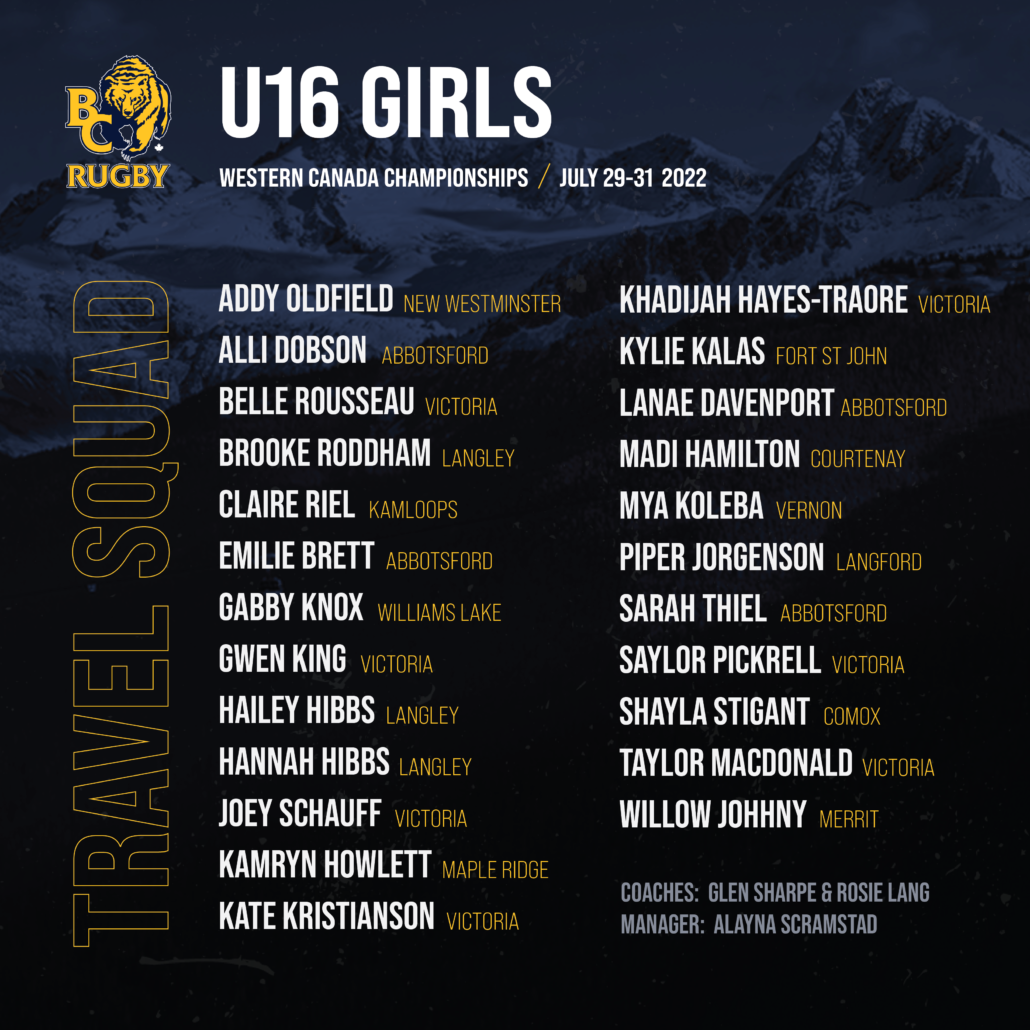 BC BEARS U16 GIRLS TRAVELLING ROSTER 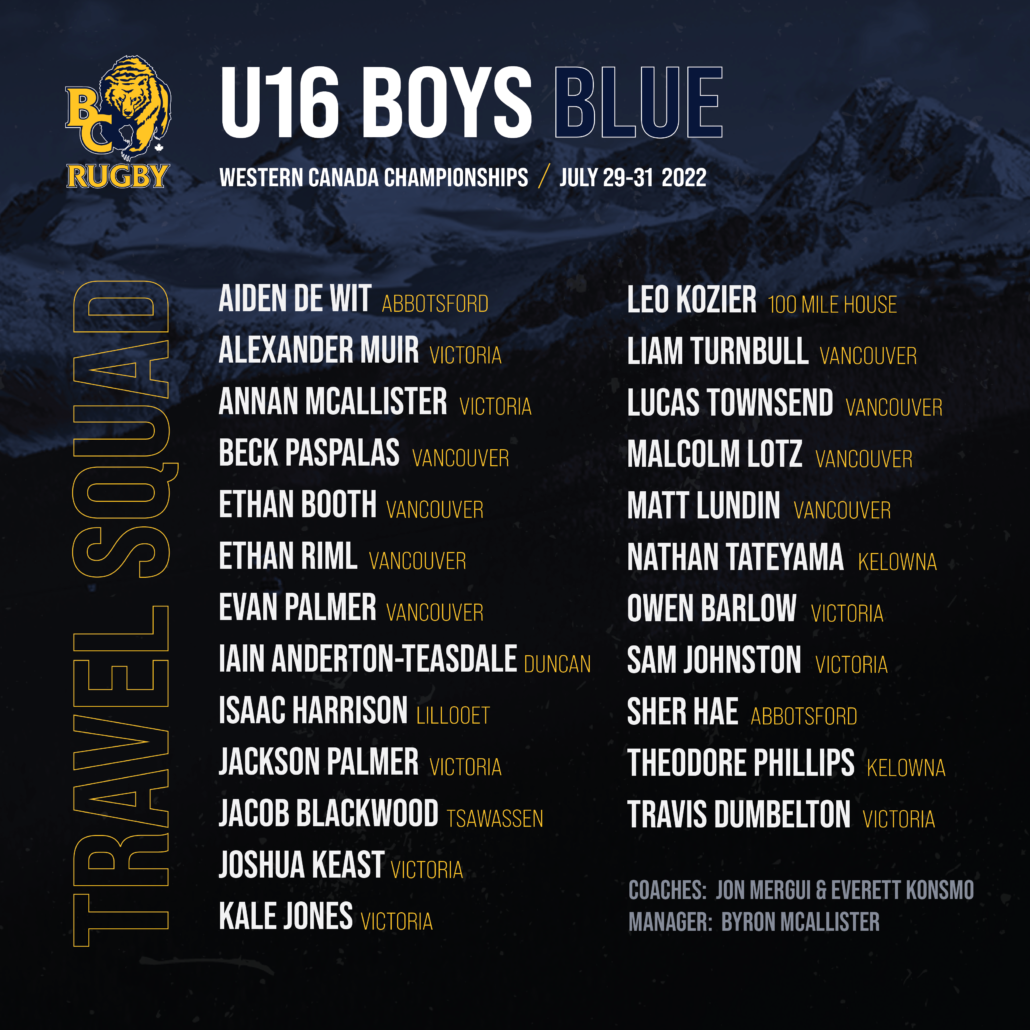 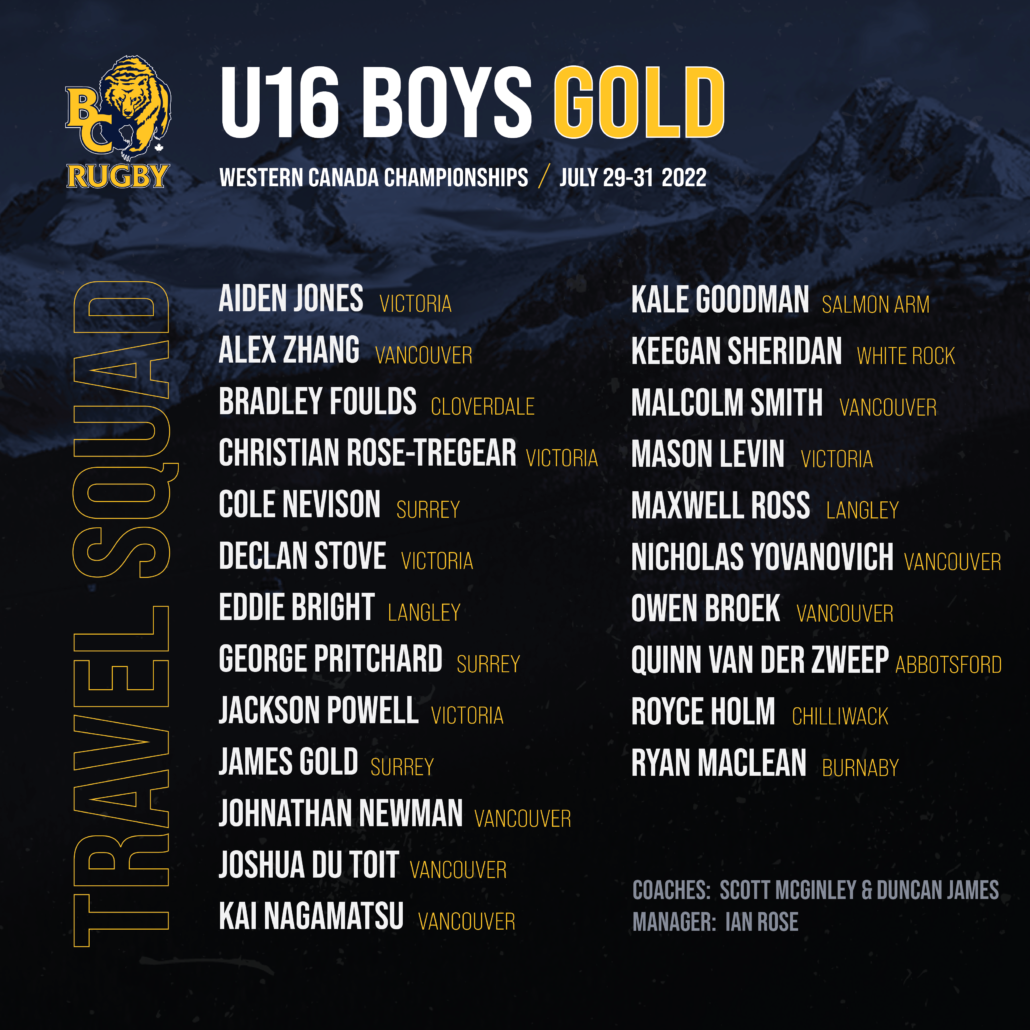 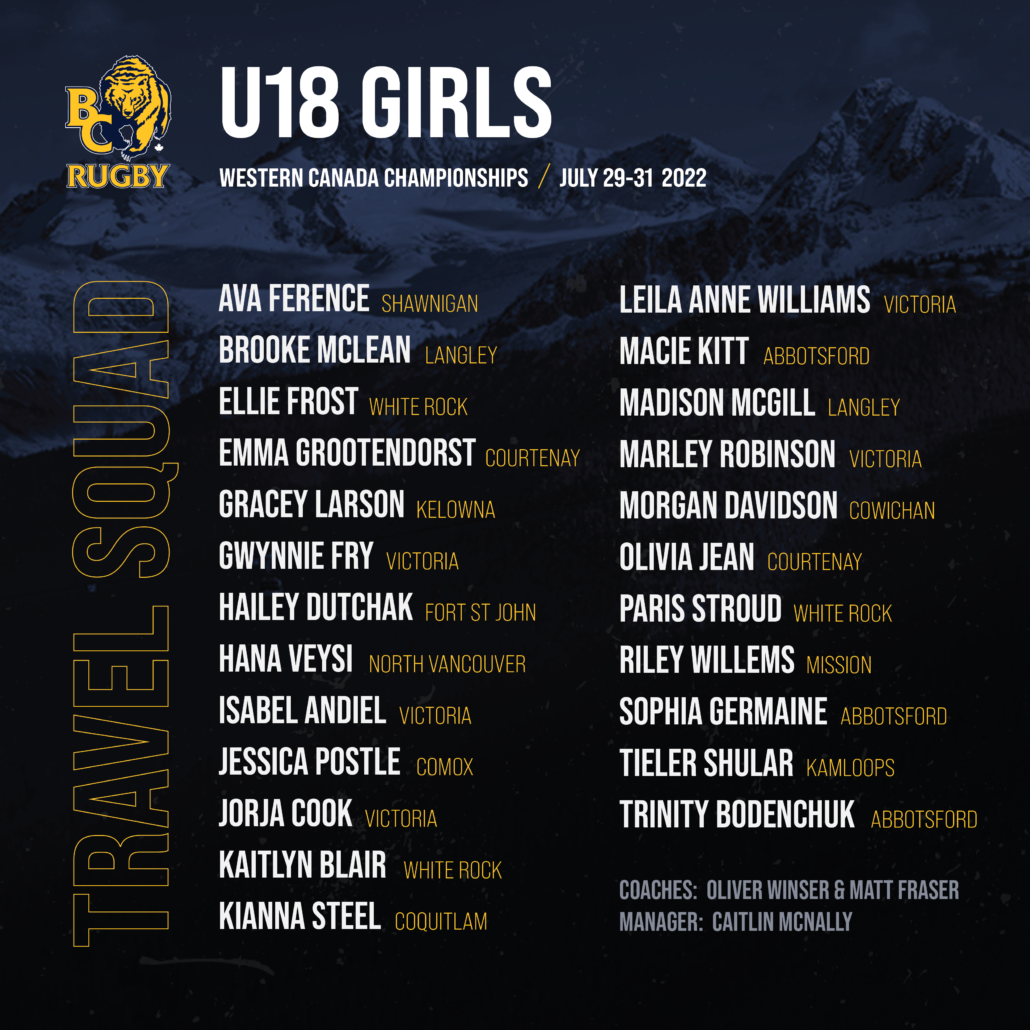 BC BEARS U18 GIRLS TRAVELLING ROSTER 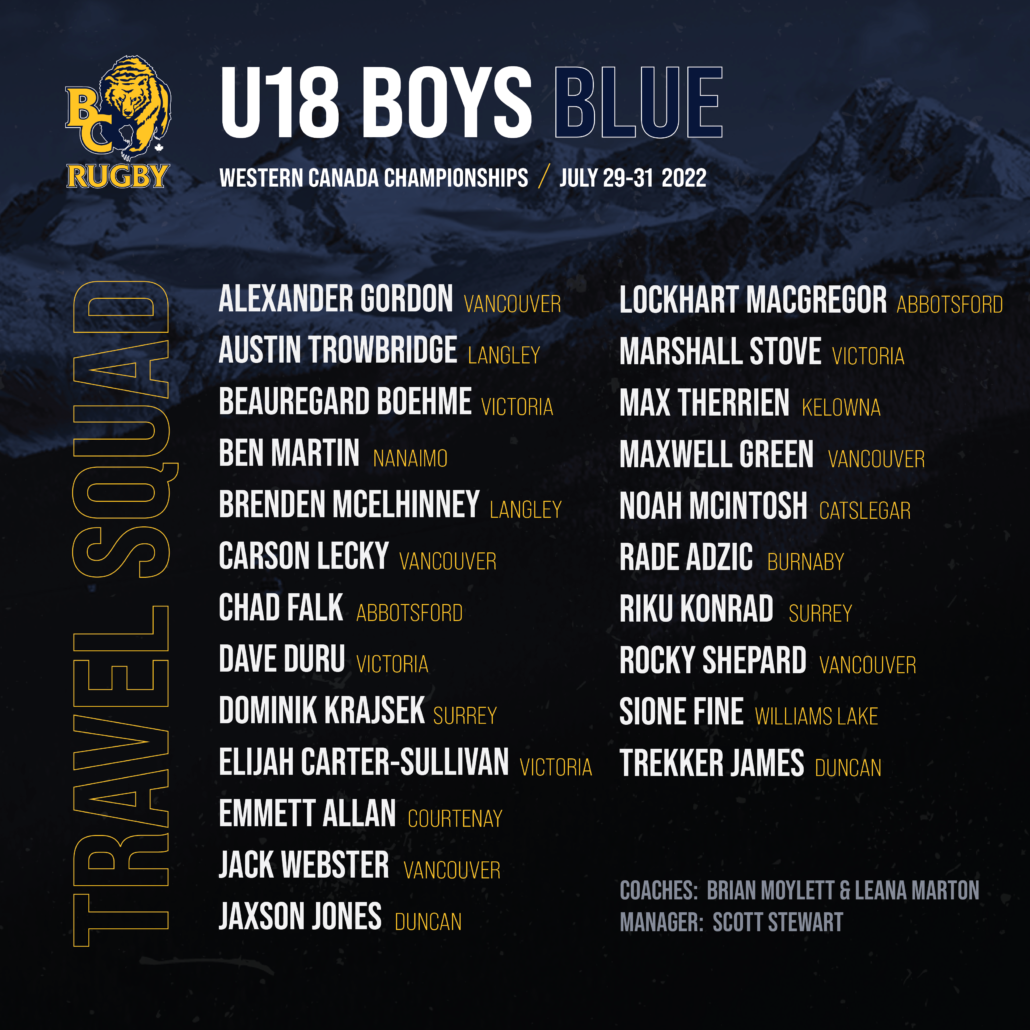 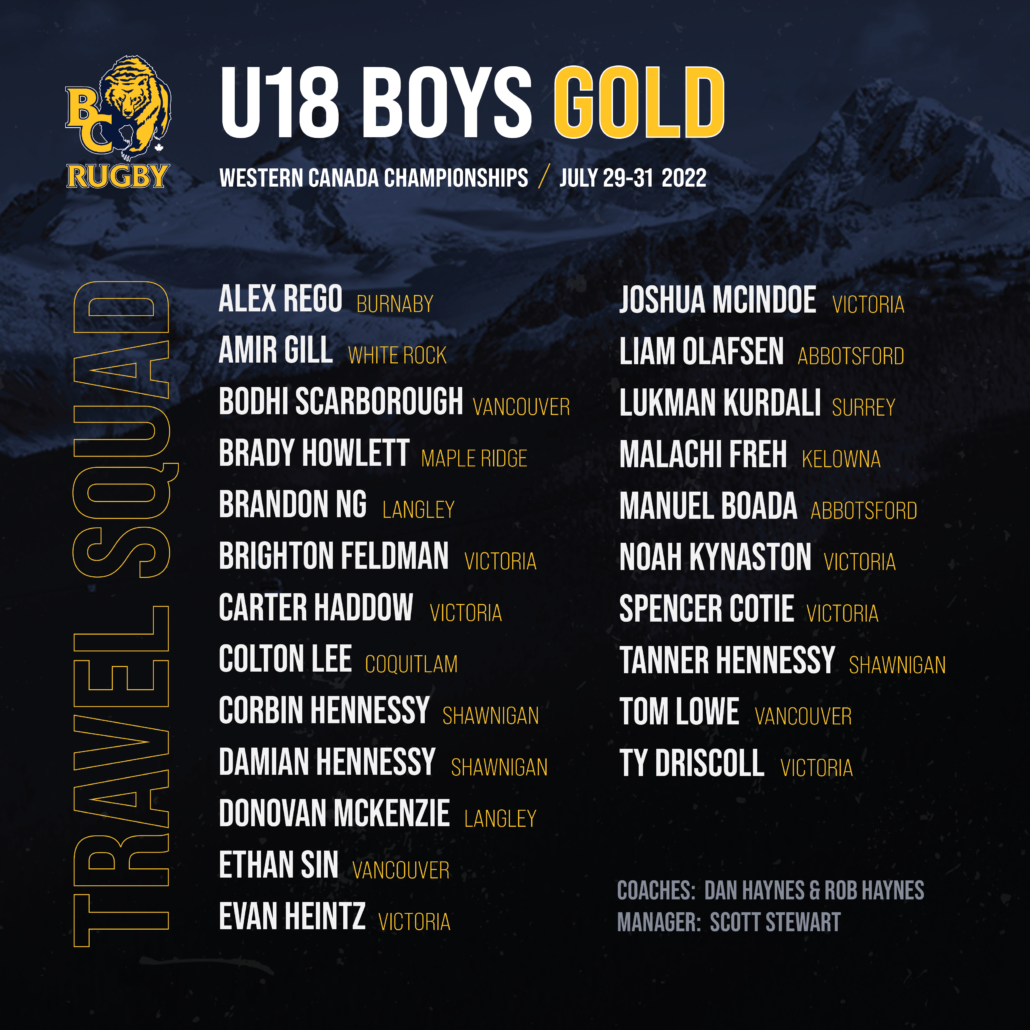 BC Rugby Announces BC Bears U23 Roster vs. Alberta Wolfpack