Get your ticket to watch the first ever Major League Rugby regular season match played in British Columbia!

Tickets are now on sale for the Toronto Arrows vs. Los Angeles Giltinis match taking place at Starlight Stadium in Langford on Friday, February 11, starting from just $20.

Tickets to the match are now on sale to the general public via AXS, the official ticketing partner of the Toronto Arrows. Tickets are available on a first-come, first-served basis, while supplies last. 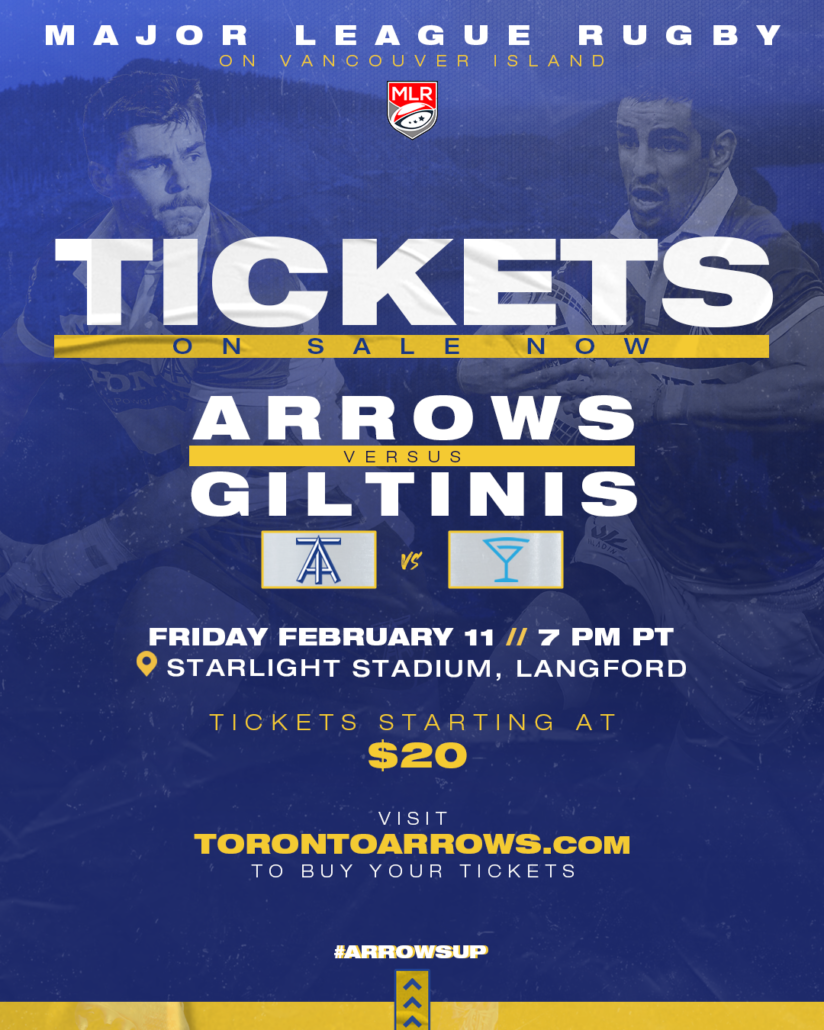 “The Arrows are very excited to participate in the first professional rugby game ever played in British Columbia,” said Mark Winokur, Toronto Arrows Chief Operating Officer and General Manager. “British Columbia has a long and storied tradition of rugby across the province, and we know our match with Los Angeles will have an incredible atmosphere in a stadium of passionate fans.”

“As Canada’s representative team in Major League Rugby, our ties to British Columbia are strong. Our roster features several players who were born and raised in the province, along with many players who have played at Premier League and Coastal Cup clubs, which will make this match feel like a homecoming for many of our guys.”

“We’re looking forward to having the opportunity to test ourselves against the reigning MLR champions early in our 2022 schedule. In preparing for what should be a great match and a fantastic event, we’ll be continuing to work closely with the City of Langford, Rugby Canada, and BC Rugby to help make this fixture a day to remember for players and fans alike.”

Langford’s Starlight Stadium is a premium-grade artificial turf field that can host upwards of 6,000 guests. Located a short drive (15km) west of Victoria on Vancouver Island, the field is home to Rugby Canada, the Westshore Rebels (Canadian Junior Football League), and Pacific FC (Canadian Premier League). The stadium has hosted a multitude of high-profile sporting, entertainment and community events since opening its doors in 2009.

With the health and safety of spectators, athletes, and team staff serving as the organization’s top priority, all fans in attendance aged 12 or older at Starlight Stadium will be required to show proof of full vaccination upon entry.

Compliance with certain health and safety policies will be required for entry into Starlight Stadium, and such policies may be modified according to then-current public health guidance and applicable law. Updates will be made available prior to the match. Fans should visit here for more information.