“Through Rugby, I met all these amazing people” – Canada’s Conor Trainor buzzing for Tokyo 2020

Vancouver native talks Rugby in BC, attending St. George’s School in Vancouver and playing in France

For BC and Canada’s Conor Trainor, the Olympics is the pinnacle.

Vancouver resident Trainor has come a long way since he first picked up a Rugby ball in BC. He has represented Canada at both XVs and 7s formats and has been part of the national set-up since 2008.

The 31-year-old has appeared at three Rugby World Cups, won two gold medals at the Pan-American Games, and played professionally in France.

Next on the Rugby bucket list? Coming back from Tokyo 2020 with an Olympic gold medal.

What is Rugby 7s? #JoinTheGame Now!

“For me, the Olympics is the pinnacle. I’m not sure how it’s going to get better than that,” Trainor told BC Rugby ahead of travelling to Japan.

Trainor, who can play at centre or on the wing, is part of Canada’s Men’s 7s team making its Olympic debut at this year’s rescheduled 2020 Tokyo Games. The team missed out on qualification for Rio five years ago when Rugby 7s was first introduced as an Olympic sport.

With 10 of the 13-player squad hailing from British Columbia, Trainor knows he is part of a unique set-up.

“I’ve been around the core of this group for eight or nine years now,” Trainor said. “It’s a very special group to be playing with. Guys who I’ve played a lot of rugby with and guys who are straight up some of my best friends. To come back into a situation like that has been amazing.”

Being a smaller guy in his youth, Trainor admitted he felt fear after he swapped soccer for Rugby in high school. But he soon fell in love with the sport, playing alongside friends at St. George’s School in Vancouver.

“The friendships and the social part of it, that started in high school,” Trainor said. “That part sticks throughout adulthood. I’ve started rugby at a couple of different teams in my career, in different countries and provinces – and I immediately had 50 or 60 new friends!”

“I can’t say enough good things about my time at St. George’s School. They go out of their way to hire good people and give you those opportunities to thrive. I’m very lucky to have been given the opportunity to go to St. George’s because I don’t think I’d have got to this level without that. It shows, with a quarter of the [Olympics] team coming from St. George’s, the strength of that program.” Conor Trainor

From St. George’s School, Trainor’s Rugby career blossomed. Provincial appearances for BC at national tournaments left Trainor “pumped” and eager for more. Canada U20s came calling in 2008. He played at the University of Western Ontario, where he graduated with a degree in engineering, before heading back west with the UBCOB Ravens.

Trainor became a regular in Canada’s XVs and 7s squads over the next few years. After making his Senior XVs debut against Russia in 2011, he went on to represent his country at three Rugby World Cups and racked up 36 Test appearances over the next eight years. Of the eight tries he scored at Test level, two famously came against the All Blacks at the 2011 World Cup.

Shortly after Canada’s Men’s 7s team missed out on qualification for the 2016 Olympics in Rio, Trainor got an opportunity to play professionally with Rugby Club Vannes and then USO Nevers in France.

“Playing professional was always on my radar. From the 2011 World Cup I started to get offers from France and the UK, so I always thought the possibility was there,” Trainor said. “It was one of the better decisions I’ve made. My time in France was amazing. I made lifelong friends. It was awesome.”

It was an opportunity, Trainor said, that would not have come his way had it not been for Rugby.

“Through Rugby, I met all these amazing people. In a year I was there, the amount I was able to experience was wild. If someone moved for a regular job, it would take much longer to integrate into society. With rugby comes more experiences.”

Something new on the horizon

However, Trainor knew his move to France would be temporary. Playing at the Olympics, after all, was always his dream. When Canada’s Men’s team qualified for Tokyo 2020, he reached out to head coach Henry Paul about the possibility of coming home.

Trainor then spoke to his club president in France, who graciously agreed to cancel his contract and wished him all the best going forward.

Get Involved and #JoinTheGame – Find Your New Club in BC

While the door to playing in Europe again is not officially closed, Trainor is excited by a new challenge waiting for him post Tokyo. Instead of testing his body, he will test his mind and attend UBC in Vancouver to study for his MBA (Master of Business Administration).

“It’ll be my first time living in Vancouver since high school, so I’m excited to be going back,” Trainor said. “It’ll be cool to do something completely new. I’ll be bottom of the barrel in terms of experience, but I can’t wait.”

Canada’s Men’s 7s team kick off their Olympic campaign against Great Britain on Sunday at 5:30pm PST – here’s all you need to know about watching Canada at the Olympics! 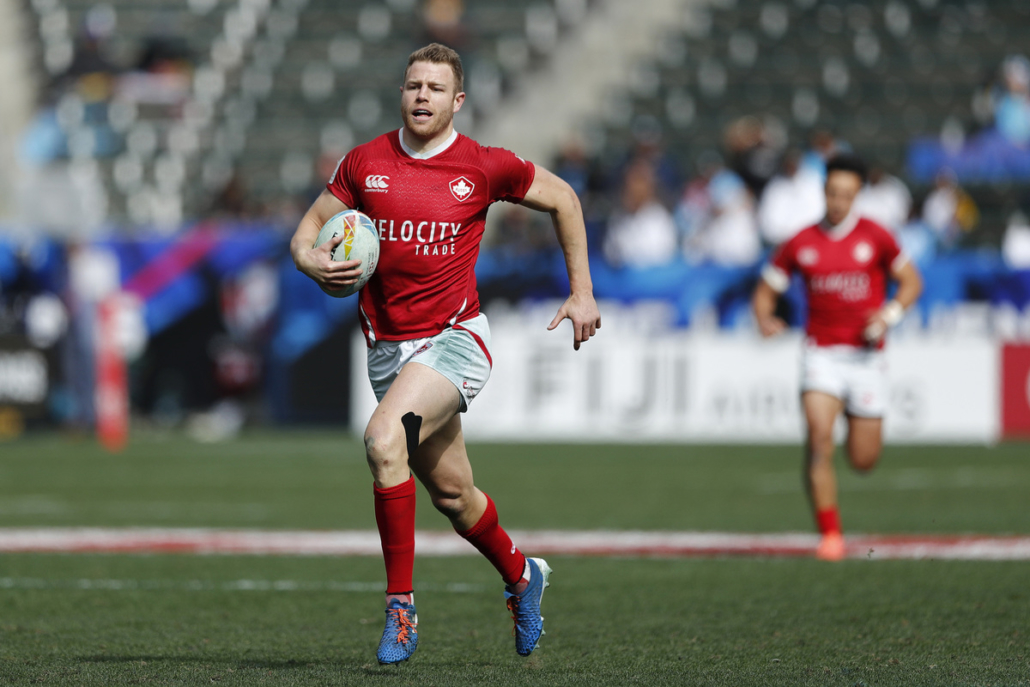