Kayla Moleschi and the Canada Women’s 7s team have one goal in mind at the Tokyo 2020 Olympics: winning gold.

Williams Lake native Moleschi was an integral part of the team that claimed bronze five years ago when Rugby 7s first made its Olympic debut at the 2016 Rio Games. BC’s Moleschi now wants to help her teammates achieve the ultimate prize.

What is Rugby 7s? #JoinTheGame Now!

“If you ask any athlete going to games what they are there for, it’s gold,” Moleschi told BC Rugby ahead of departing for Japan. “I’m incredibly proud of the team we had in Rio, there were so many unknowns during those Games.

“To have another crack at the gold medal at the Olympics has been our dream from the very beginning. We’re looking forward to getting back on that pitch. We’re going to put up our best fight.”

Moleschi, whose own Rugby journey started in BC when she was just 14 years old, knows Tokyo 2020 will be a different experience to 2016. While Rio was new, fresh and exciting, there will be no fans present in Tokyo Stadium when the women’s 7s competition kicks off on Wednesday.

But, for the Williams Lake Rustlers stalwart, playing alongside the people she has grown to know and love through Rugby over the past decade is something she won’t take for granted.

“It means everything,” Moleschi explained. “To know these incredible humans inside and out, both on and off the field, it means the world to me to stand beside them and represent each other. They’re not just my teammates – they’re my friends, lifelong friends at that.

“No one is going to know what you experienced in these programs apart from those athletes. That’s special. No one will know the gruelling sessions we go through. The tears, the blood, everything we shed. You go through some tough moments, but they lift you up.

“It’s crazy to think another chapter is going to be closing in 15 days. Another five years we’ve all put in. I’m emotional about it because it’s hard to say it’s coming to an end, but it’s incredible to see how far we’ve come and where we’re going to go.”

Moleschi has enjoyed a successful career to date. She was part of the BC team that won the National U18 Girls’ XVs Championships in 2007. After attending Thompson Rivers University and University of Lethbridge, she was named Canada West Rookie of the Year and CIS All-Canadian in 2011.

She made her Canada Women’s Senior 7s debut that same year, scoring two tries in her first match at the 2011 IRB Challenge Cup. In 2015, she again scored twice as Canada won gold at the Pan-America Games. A year later, Moleschi became an Olympic bronze-medallist in Rio.

None of which would have been possible, she says, without the support from her home club – the Williams Lake Rustlers.

“I couldn’t be more honoured to represent a club than I do Williams Lake,” Moleschi said.

“It goes to show there is a lot of talent in these small towns and it shows why Club Rugby is so important to these BC communities. Not only is it a chance to get out, get the boots on and play some games or play some Touch – it’s the club atmosphere that helps you get to where you are. Without them, I wouldn’t have had the funding to go to a lot of tryouts when I was younger.” Kayla Moleschi

“I always give credit to two of my coaches – Mauro Calabrese and Todd Pritchard. They’re humble guys. They do a lot for our community, in Rugby and in elevating younger athletes to become incredible humans.

“I’m honoured to represent that club and community. You have those club members getting the whole community involved and coming together.”

#JoinTheGame – Find Your New Club in BC Now!

With all eyes focused on Tokyo, Moleschi insists she and her team-mates will handle any pressure. She believes the global pandemic has left the team hungrier than ever to succeed – that this team will not stop working for each other on and off the field. It is the closest, she says, the squad has ever been.

But it isn’t just about the athletes and the staff representing Canada in Japan this summer.

“Our team isn’t just seven athletes on the field – it’s the 13 athletes going to that tournament, the 21 to 23 athletes who have been in the program for the past five years that helped elevate us to get to where we are now,” Moleschi said.

“It takes a village to get you to where you need to be. That’s true about my teammates, the support staff, my family and my friends. You want to make that extra effort and go all the way. I talk about supporting my teammates and making every ruck and setting people up – I love that.”

It’s a brand of Rugby that Moleschi swears by: “I don’t like to live with regrets on the field,” she explained. “I just want to play hard, fast hitting rugby where I’m constantly supporting and setting up my teammates and putting points on the board.

“Playing with your heart and soul is the best way to play Rugby.” 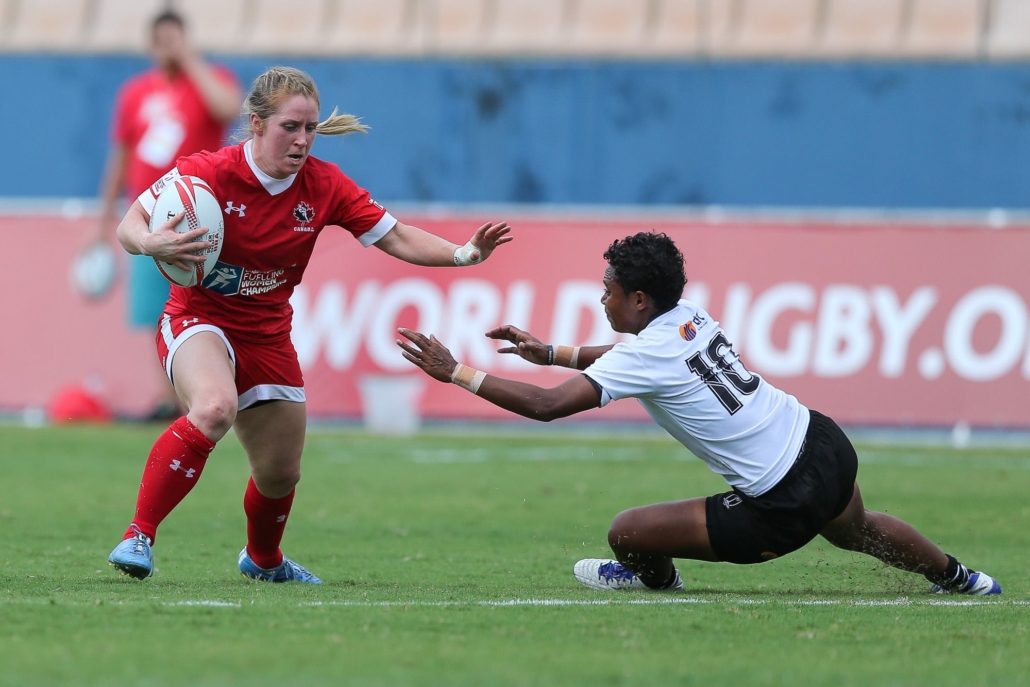 “Through Rugby, I met all these amazing people” – Canada’s...

“I had no idea Rugby was going to take me all around the world”...
Scroll to top