Last week, as part of the 2022 HSBC Canada Sevens, Rugby Canada focused on more than just hosting the international event. Growing the game and connecting with the community around Vancouver was the primary focus for the organization’s Rugby Development department.

Throughout the week of April 11-15, Rugby Canada’s Community Visit Program made several stops around city to give kids the opportunity to play Rugby. With the help of BC Rugby, Scribes RFC, Capilano RFC and several international Sevens teams who competed in the HSBC Canada Sevens event, Rugby Canada exposed more than 500 kids to the sport.

On Tuesday April 12, the national Rugby Sevens teams from Ireland, Fiji, Wales, France and South Africa made the trip to Vancouver Technical Secondary School. Together, players from Fiji and Ireland led roughly100 students through various Rugby activities before the South African, Welsh and French teams conducted a second session with an additional 100 participants.

“I think coming to a school that may not hugely exposed to Rugby is brilliant. We got to meet all these energetic kids, have some fun and it brings you back to when you were a kid and when you first got started in Rugby.” Ireland Sevens captain Billy Dardis

On Wednesday April 13, the Kenyan national Sevens team was welcomed to the traditional territories of the Squamish Nation. The Kenyan players spent over an hour teaching the basics of Rugby to more than 20 indigenous youth at the Chief Joe Mathias Centre. Members of the Capilano Rugby Club were also on hand to assist with the event.

“This is my community gym and it was really great to have one of my first passions to be in my community. This was another great opportunity because I have taught Rugby here before and those kids now want to continue with rugby after seeing me play.” Salina Williams, Squamish Nation and Capilano Rugby Club 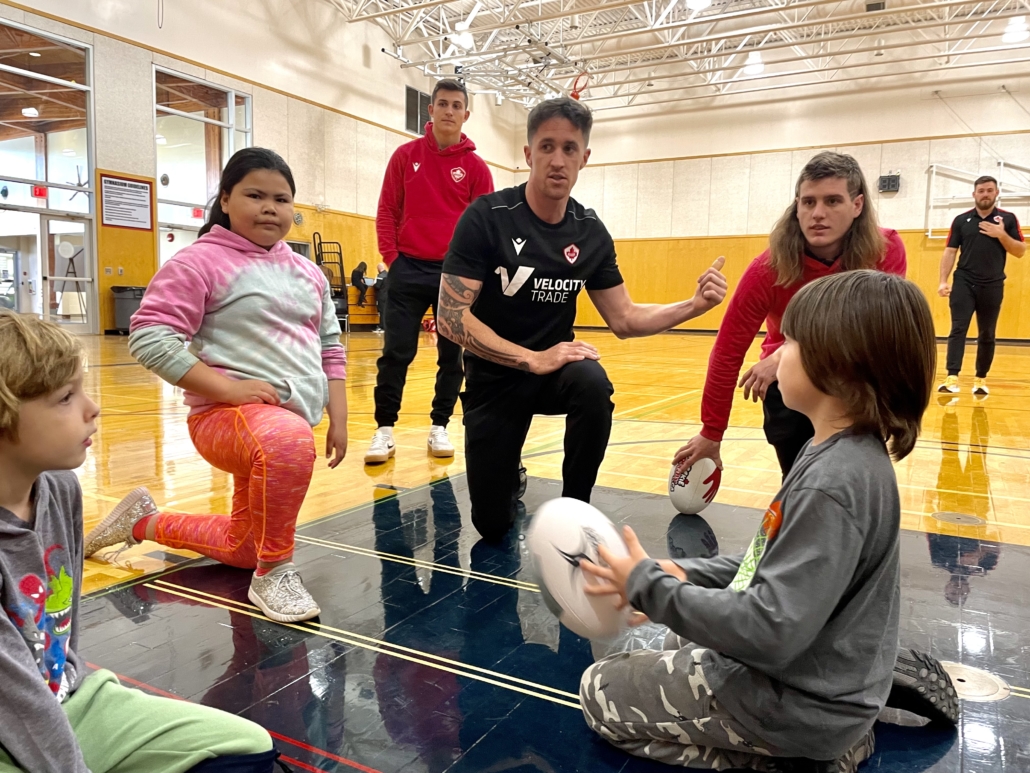 “We really wanted to expose the kids to Rugby. Rugby is an up-and-coming sport in our community and we just want the kids to have some fun and learn a new skill that we can implement into our sports programs.” Michael Wilson, Recreation and Program Manger of Tsleil-Waututh First Nation

In the afternoon of April 14, the national teams from the USA and Argentina visited John Henderson Elementary while Australia and Japan were at Moberly Elementary.

“This was a successful event because of the level of engagement. The students are very enthusiastic and to be with high-calibre athletes also motivates them. Rugby Canada has gifted us a bag of Rugby balls. I am sure they will be very popular and the kids will be able to practice what they learned today.” Harjinder Sandhu, Principal of John Henderson Elementary

More community visits planned on Vancouver Island in the week leading up to the HSBC Canada Women’s Sevens tournament on April 30th and May 1st. Canada’s Senior Women’s Sevens team will host the 12 best nations in world at Starlight Stadium in Langford, B.C.

Sign Up Now For Free Girls Can Rugby Tryout in Fernie!
Scroll to top