HSBC Canada Sevens Vancouver: BC well represented on and off the field!

BC enjoyed strong representation both on and off the pitch as the HSBC Canada Sevens Vancouver returned to BC Place for the first time since March 2020.

Both Canada’s Men’s and Women’s teams enjoyed incredible support from the home crowd in an action-packed weekend of Rugby.

There were plenty of fans sporting their BC Club colours in the stands – as well as some excellent costumes! 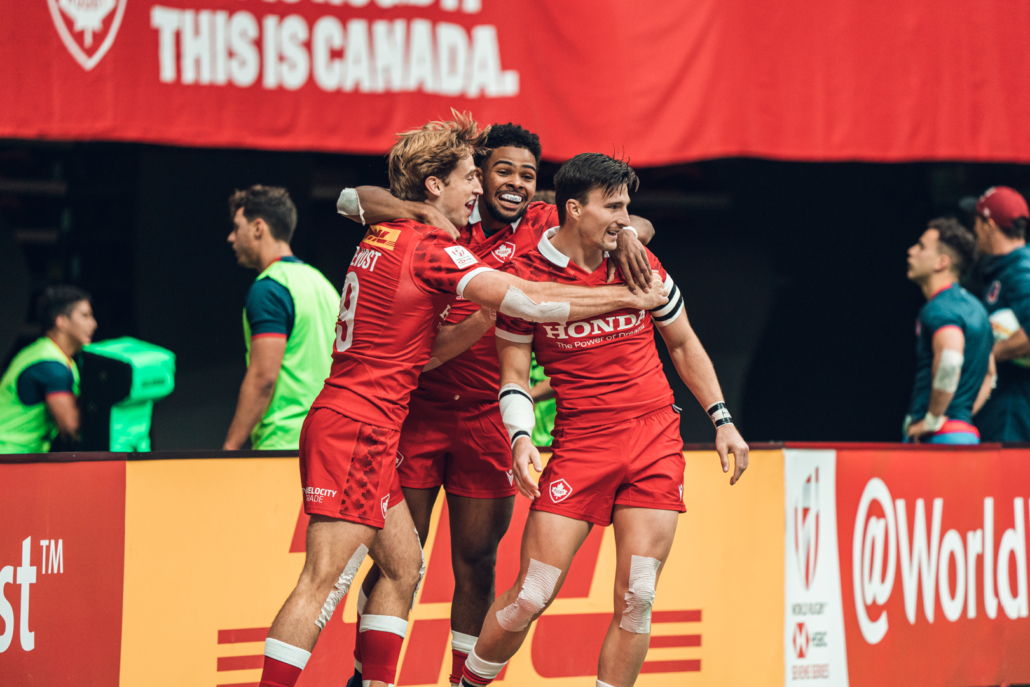 BC’s Berna and Prevost got Canada’s Men’s 7s team off to a flying start in their opening match against Germany on Day 1, scoring the first two tries in the 24-5 rout. Josiah Morra’s double added gloss to the score line, while Prevost converted twice for a comfortable win.

Canada’s Men’s second fixture against Chile was a tight clash, with the hosts edging a 19-14 victory. Andrew Coe opened the scoring for Canada, before tries from BC’s Thiel and Percillier were converted by Prevost to secure victory.

Canada faced USA in the final fixture of the day, with first place in Pool C on the line. BC trio Percillier, Ngongo and Carson all scored tries but it was the United States who clinched top spot with a 29-19 win.

Canada’s Men’s 7s team faced Great Britain in Sunday’s quarterfinal, but lost out 31-5 with Carson scoring Canada’s only try. Canada’s Men bounced back strongly for a 33-19 win against Spain in the fifth-place semifinal, with tries from Allen, Ergas, Breen and Prevost.

Canada was pitted against old rivals USA in the fifth-place play-off but, despite Carson’s second try of the day, the hosts fell 26-7. 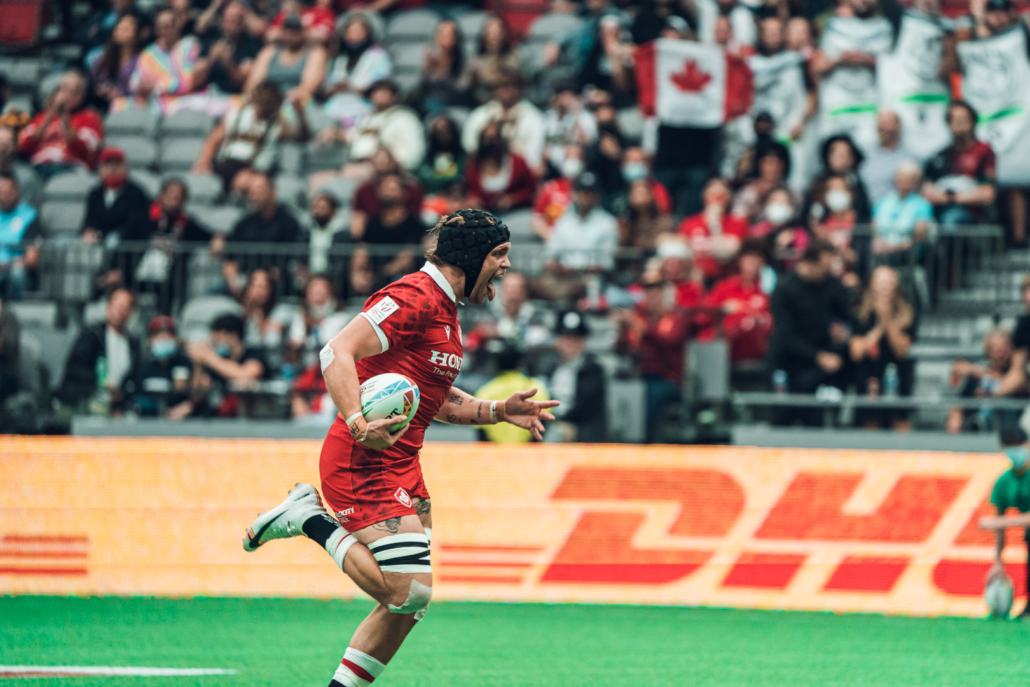 Canada’s Women’s 7s played out the opening game of Saturday’s Fast Four action, but ultimately fell 22-12 to the USA. Emma Chown scored both of Canada’s tries, with Chloe Daniels adding a sole conversion.

Canada’s second match against Great Britain was hard-fought but ended in a 19-5 defeat. Renee Gonzalez crossed the line for Canada’s try.

Canada saved its best performance of the day in their last Final Four match with a comprehensive 39-0 win over Mexico. Alysha Corrigan, Chown, Fancy Bermudez-Chavez and Olivia Apps scored tries in the opening half. Chloe Daniels, Corrigan, and Asia Hogan-Rochester all crossed over in the second half, with the latter adding two conversions to her tally.

USA awaited for Canada in the semifinal but, despite two tries from Renee Gonzalez, the hosts were beaten 22-12. However, Canada’s Women’s team rallied for the third-place play-off, crushing Mexico 48-0 in front of a buoyant crowd. Chown, Apps, Sabrina Poulin, Levale, Corrigan and Daniels all crossed over for Canada. 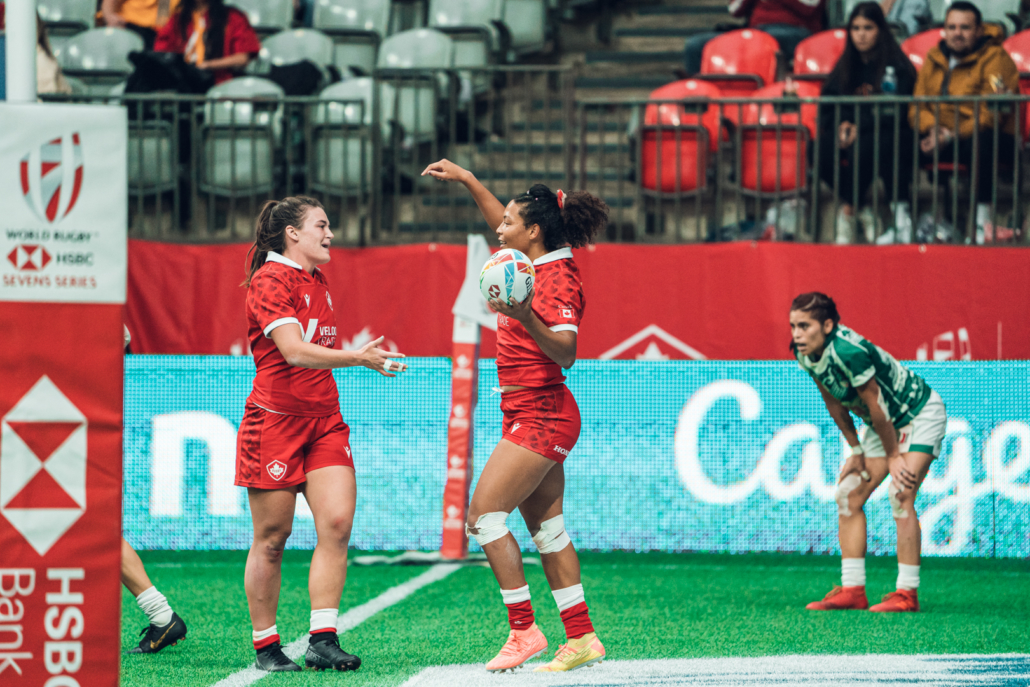 BC’s OFFICIALS SHINE AT BC PLACE

14 BC Member officials were in the thick of the action to ensure the weekend’s Rugby ran smoothly, with three women and 11 men from all over the province featuring at BC Place.

Five officials made the trip from Vancouver Island, four officials represented Vancouver Coastal, with three from the Fraser Valley region and two from the Okanagan across both days.

John De Goede and Bruce Kuklinkski acted as Citing Commissioners, with Chris Assmus as TMO. BC Hall of Famer Alan Hudson was included on the Judicial Committee for the tournament.

Interested in becoming a Rugby Official? Want to give back to the community? #JoinTheGame now!

The HSBC Rookie Rugby Ball Carriers who featured on the second day, delivering the match balls to the centre of the pitch, represented BC’s strong Club Rugby scene.

The winners of the Rookie Rugby Ball Carrier Contest got to meet members of Canada’s Men’s and Women’s Sevens Team this week!