Held over two days in front of bumper crowd at Exhibition Park, the home of Kamloops Rugby Club, the 2022 tournament produced plenty of thrills and explosive Rugby throughout.

This year marked the first Women’s Championship in the event’s history, contested in Rugby 7s format. The women’s event kicked off with Pool matches on Saturday to determine the seedings for Sunday’s semi-finals and final.

After two days of intense action, hosts Kamloops rounded off an unbeaten weekend to topple a spirited Terrace RFC side 26-15 in the final and become the first side to lift the new Women’s Saratoga Cup. Elk Valley RFC claimed a 39-0 win over Kelowna Crows for third place.

In the Men’s competition, defending champions Rocky Mountain Rogues made it successive championship wins following a 24-5 win over Terrace Northmen to take the Cup back to Cranbrook for the second year running. Vernon Jackals defeated Elk Valley RFC 41-0 to claim third place.

The Saratoga Cup brings together BC’s most geographically dispersed Clubs, from north-west to south-east, and is one of the most prestigious events in the BC Rugby calendar. The Saratoga Cup is contested by teams from three regions: the Okanagan, the Kootenays, and the Interior.

A full round-up of the weekend’s matches can be found below.

BC Rugby and its Members gratefully acknowledge that we live, work, and play the sport of Rugby on the traditional and unceded territories of Indigenous Peoples across all regions of British Columbia. 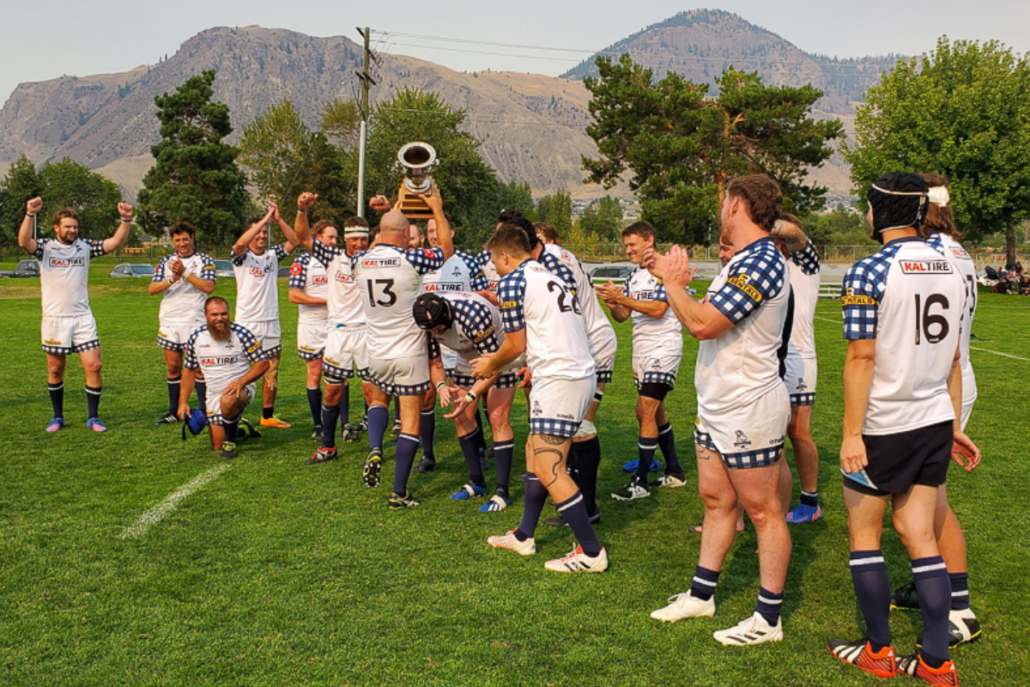 The first ever Women’s Saratoga Cup Final did not disappoint as hosts Kamloops Rugby Club and Terrace RFC treated a packed crowd to a fantastic contest worthy of any championship. While Kamloops had proven too strong the previous day, Terrace was ready to go from the first whistle and pushed their opponents all the way. Just when it looked like Terrace might cause the upset of the tournament, Kamloops hit back with a breakaway move that saw them clinch a 26-15 victory and become the first team to lift the Women’s Saratoga Cup trophy.

In the third place play-off, Elk Valley RFC defeated Kelowna Crows 39-0 to round off an impressive weekend of women’s Rugby.

“What an amazing weekend of high-level Women’s Rugby. The competitiveness in the athletes was amazing. It is fantastic to see the development and growth of Rugby across BC, bridging the gap of distance and time to see competitive Rugby across the province.” Kamloops Rugby Club Past President Erin Jensen

“The Saratoga Cup is the one thing that is permanently on the calendar and can be marketed for recruitment. It is the gold star at the end of the tunnel. We strived to get a roster together for the event. It is important to have these events and grow the sport. When you are so far and travel is such a huge demand, having a Rugby festival like the Saratoga Cup provides competition for new teams. We have been fighting the good fight and want to give the women a great opportunity going forward.” Elk Valley RFC’s Jocelyn Manley

Semi-Final 1: No. 1 seed Kamloops took on No. 4 seed Kelowna in the opening Women’s Saratoga Cup semifinal. The Crows are competing in their first season of matches and will have taken plenty from this tournament, but it was the hosts who advanced thanks to a 50-0 win.

Semi-Final 2: No. 2 seed Terrace and No. 3 seed Elk Valley RFC played out arguably the match of the weekend in the second semifinal. With the teams locked at 15-15, overtime was needed to determine which side would advance and take on Kamloops for the title. Both teams pushed hard for a winner, but it was the newcomers Terrace that held their nerve to sneak a historic 20-15 win.

The Men’s Saratoga Cup Final was always going to be a physical affair and both teams were fired up from the off. The Rogues got the better of the Northmen in last year’s semifinal and the defending champions were on the front foot in the first half, piling on the pressure to keep the Northmen parked in their own half.

Despite a few spirited Terrace breakaways, the Rogues defence stood tall as they took a 12-0 lead into the break. The physicality from both teams continued throughout the second half, but the Rogues’ pressure paid off as they scored two further tries to seal a 24-5 victory and lift the Saratoga Cup for the second year running. Vernon Jackals beat Elk Valley Bulls 41-0 to take third place.

“Nothing but thanks and respect to Terrace for having a well-organised Club, who we look up to and aspire to be. We’ve worked hard since last year and it’s tough thing to repeat. The boys committed to the goal.” Rocky Mountain Rogues President Pete Dove

“The team is as great as the win. This is the hardest competition of the year. Vernon Jackals gave us a hell of a game, and so did Terrace.” Five-time Saratoga Cup winner Jamie McKinstrie 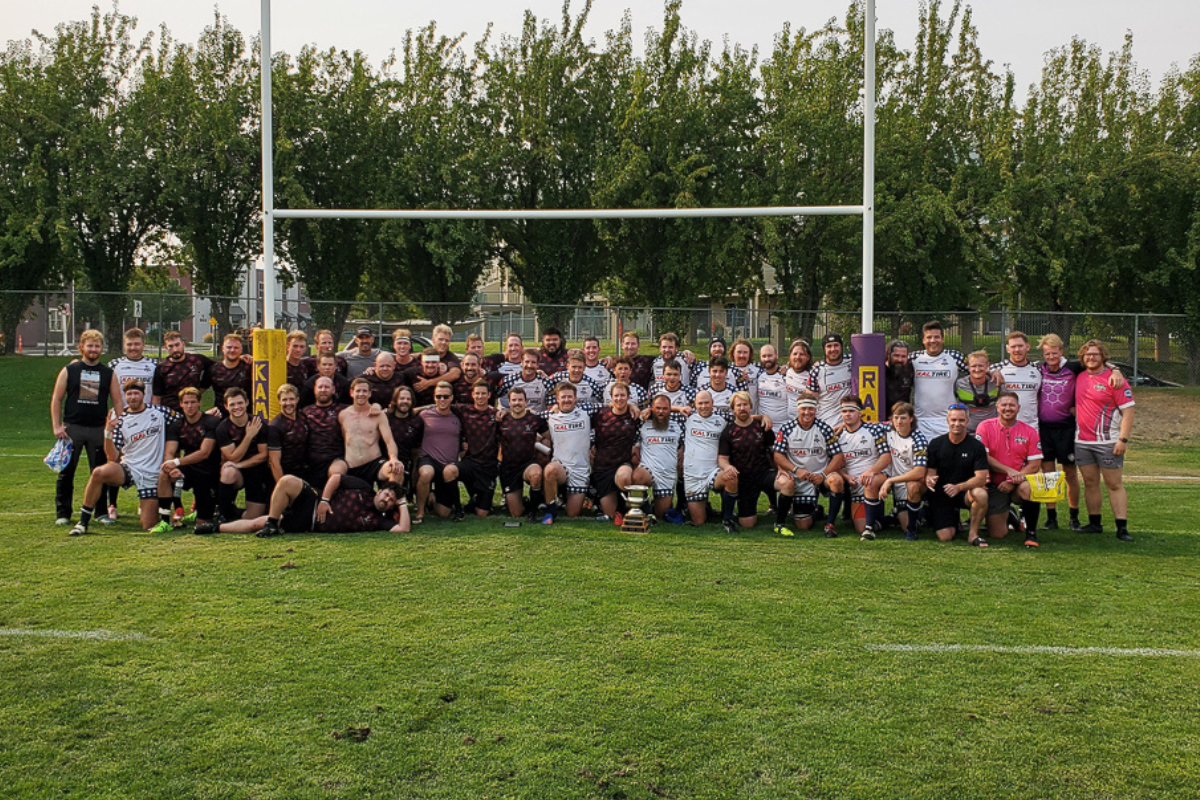 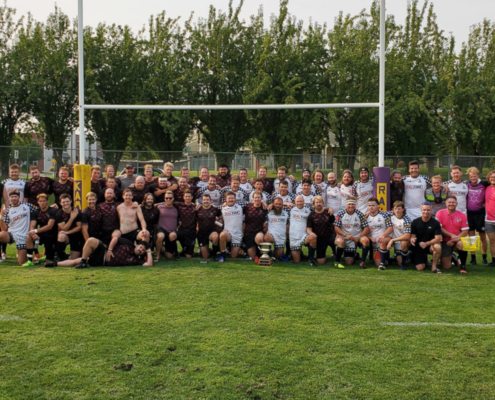 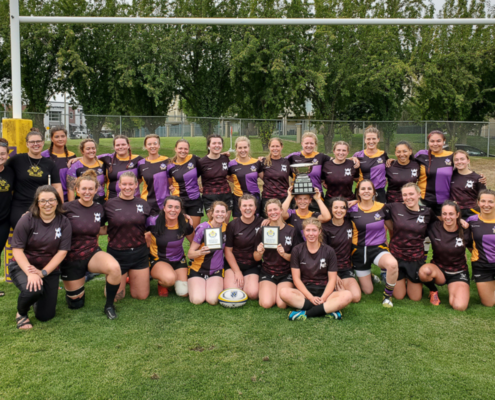 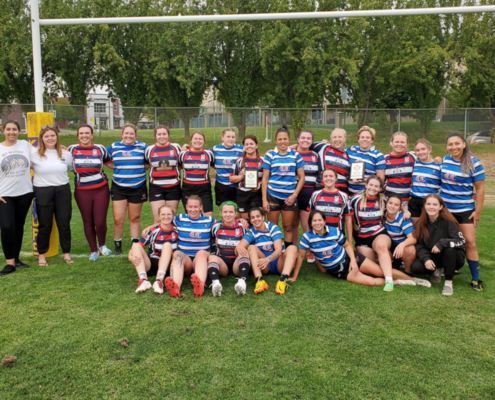 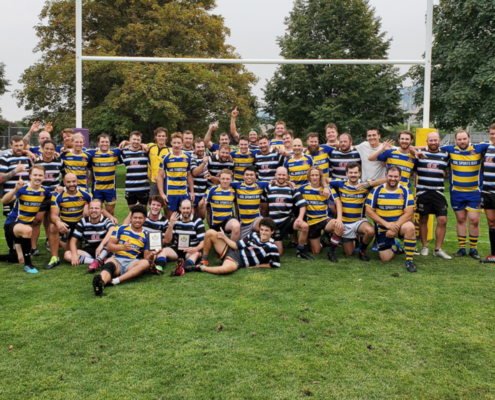 DAY 1: MEN’S SEMI-FINALS AND ROUND ROBIN

Three-time Saratoga Cup winners Terrace Northmen RFC headed into this year’s event looking to bounce back from last year’s semi-final defeat to the Rogues. After finishing their regular season with six wins from six matches, Terrace carried on their unbeaten streak with a commanding victory over Fernie’s Elk Valley RFC.

The Northmen were dominant throughout, finishing off a flurry of breakaways and strong runs through the field to put the pressure on their opponents. The Bulls got on the scoreboard but the Northmen ultimately proved too powerful for this year’s Kootenay Cup runners-up and advanced into Sunday’s final.

The Rogues started strongly and worked their way into a comfortable lead thanks to some powerful, strong breaks. While it looked like the match was won at 38-0, the Jackals showed incredible spirit to move back within 12 points and put serious pressure on their rivals. However, the Rogues’ defence stood firm in the dying minutes to book their place in the final.

Match 1: In the opening match, Elk Valley RFC and newcomers Terrace RFC contested a thrilling encounter that went down to the wire. Elk Valley suffered a tough injury in the opening minute, but it did not dampen their spirits as both teams scored following some classy breakaway play. However, it was Terrace who came out on top with a sole conversion to clinch a historic 17-15 win.

Match 2: Hosts Kamloops Rugby Club faced Kelowna Crows in front of a bumper crowd, and the home team did not disappoint. Despite a couple of impressive tries from the Crows, Kamloops proved too strong for their close rivals and ran out 39-10 victors.

Match 3: Kamloops stayed on the field for Match 3, taking on a fired-up Terrace RFC. With both sides carrying momentum from their respective opening wins, it was Kamloops that took first blood with two good breakaway tries. Terrace grew into the game and closed the gap, but it was the hosts that held firm for a 22-12 win.

Match 4 saw Elk Valley and Kelowna go head-to-head, with both teams chasing their first win. After coming close in the opening match, the Fernie side quickly found their stride against the Crows. A combination of strong movement and play saw Elk Valley put Kelowna to the sword with a 39-0 triumph.

Match 5: Kelowna stayed on the field to face Terrace RFC in Match 5 and opened the scoring with an impressive try. However, Terrace responded in style with four unanswered tries to secure the second-place seeding heading into Day 2, with Kelowna seeded fourth.

Match 6: The final Pool Match of the day saw Kamloops take on Elk Valley RFC, with the hosts looking to claim top spot in Sunday’s seedings. In a dominating performance, the host team impressed with strong movement and found the gaps to take a 46-0 victory and top seeding into Day 2 with Elk Valley seeded No. 3.

BC Rugby wishes to thank those who made for a memorable Saratoga Cup weekend in Kamloops.

Thank you to Kamloops Rugby Club for being brilliant hosts throughout the weekend, putting on an excellent BBQ and opening their Clubhouse to all.

A huge thank you to all Officials, Coaches, Team Staff, Therapists and volunteers for ensuring the Saratoga Cup ran smoothly – this event would not go ahead without your hard work and commitment.