The Rugby World Cup 7s concluded this weekend as the champions were crowned and Canada’s Women’s and Men’s 7s teams’ final positions were determined.

Here, catch up on how the matches played out with Rugby Canada’s Day 3 recap:

Following their narrow 10-7 defeat to the USA on Saturday, Canada began the final day with a 5th-place play-off semifinal against England. Abbie Brown scored the game’s opening try to give England the lead inside four minutes before Olivia De Couvreur bagged Canada’s first points as the score read 7-5 at the half.

After the break, another De Couvreur try, as well as scores from co-captain Breanne Nicholas and Keyara Wardley, went unanswered by England as Canada sealed a 22-7 victory and a place in the 5th-place play-off final, where they’d face Fiji.

A period of sustained pressure from Chile resulted in the match’s opening try when Julio Blanc touched down in the corner after the ball was swung out wide. The Chileans extended their lead when Blanc went over again in the eighth minute as they went into half time with a 10-0 lead.

Despite being a man down after Lachlan Kratz was shown a yellow card late in the first period, Canada cut the deficit in half when Josiah Morra scored their first points of the day early in the second half. They went ahead for the first time in the match just a few minutes later when Kratz went over and Brock Webster’s resulting conversion was successful.

That was how the match ended as Head Coach Henry Paul’s side confirmed a 13th-place finish.

With 5th place in the standings on the line, Head Coach Jack Hanratty’s side took on Fiji in the last match involving either Canadian team. Fiji took an early 5-0 lead when Reapi Ulunisau broke the Canadian line to touch down inside the first minute.

They turned one try into two when Alowesi Nakoci used her speed to tiptoe along the touchline and go over just a minute later. Further tries by Lavenia Cavuru, Sesenieli Donu and two more for Ulunisau to complete her hattrick capped an impressive Fijian first half performance.

After the break, Cavuru bagged her second try of the match before Adi Vani Buleki and Donu added more points to the board as Fiji emerged as 53-0 winners. 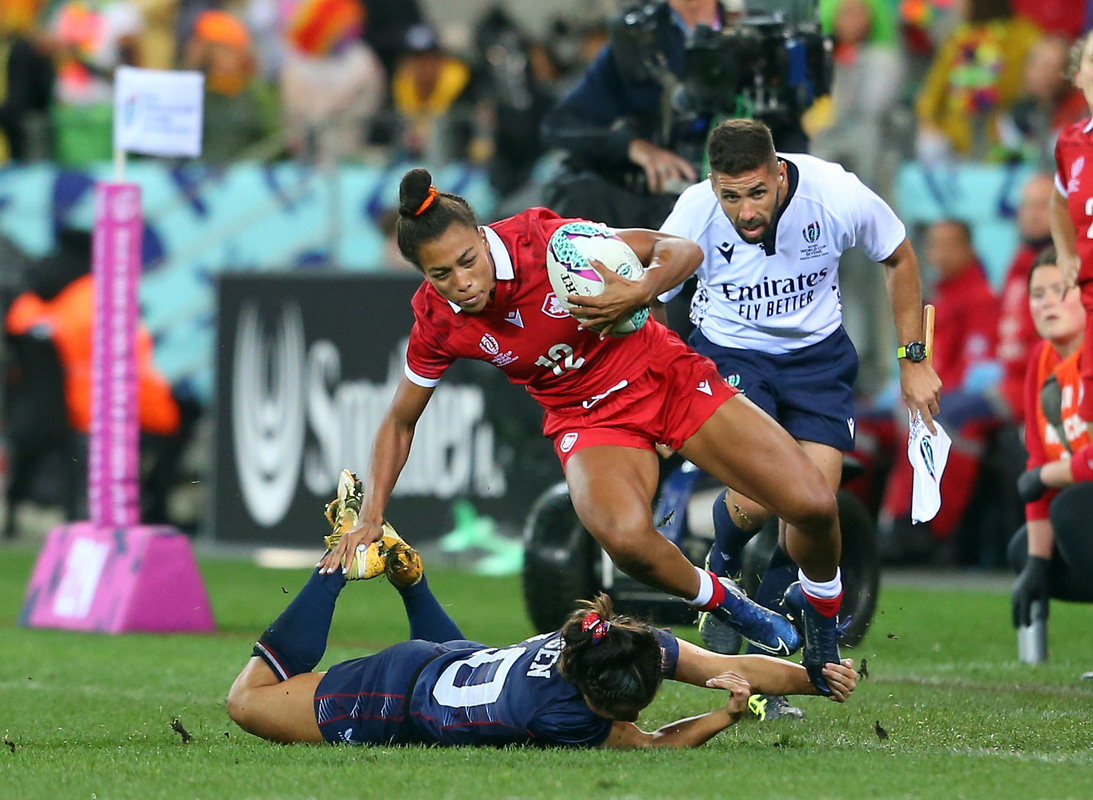 Catch up on how the matches played out with Rugby Canada’s Day 2 recap:

Day 2 started with Head Coach Henry Paul’s Men’s side taking on Uruguay in the Challenge quarterfinals. In the second minute, their opponents took the lead through a Guillermo Lijtenstein try but Canada responded quickly via Josiah Morra and a Brock Webster conversion.

Baltazar Amaya restored Uruguay’s advantage just before half time to make the score 14-7 heading into the break. Amaya repeated the feat early in the second half as Uruguay pulled away to 19-7, before D’Shawn Bowen scored what ended up being a consolation try for Canada in the tenth minute.

Against Wales in their second match of the day, Thomas Isherwood got the Canadians on the board after they worked the ball out to him from a scrum and he ran a half-length of the field to score. Webster doubled their lead when, from a break down, he faked one way and went the other, sprinting down the sideline to go over for the try.

There were two further first-half scores for the Canadians when captain Phil Berna chipped the ball through the Welsh defence and collected it to touch down beneath the posts. That was before Isherwood found Alex Russell with a pinpoint pass and the No. 5 skipped over the line to collect the try. Yellow cards were shown to Lachlan Kratz and Isherwood, as well as Wales’ Morgan Williams, just prior to the break for infringements as Canada went in 26-0 to the good.

After half time, Morgan Sieniawski scored back-to-back tries before Callum Carson also touched down for Wales to cut the lead to just seven points. A second try for Webster ensured Canada built in some breathing space with less than a minute left on the clock, and they were able to see out the match 33-19.

A sustained period of possession to open the match ended in Jaz Gray scoring the game’s first try for the Americans. Gray looked to have unlocked the Canadian defence for a second time deep in the first half but a tremendous tackle by Krissy Scurfield denied the USA another try.

After the break, Canada took the lead when Keyara Wardley received a pass inside and accelerated beyond the USA backline to score. Momentum swung back in the American’s favour, however, when Ilona Maher went over with just over 90 seconds remaining to make it 10-7, which is how the match ended.