After months of planning and preparation, the Vancouver Rogues have touched down in Ottawa, Ontario this week, ready to take on the biennial World Championships of gay and inclusive Rugby competition.

The Vancouver Rogues will field two teams for the event: Rogues 1 competing in the Bingham Cup division and Rogues 2 competing in the Challenger Cup division. The first two days of pool play has been set for August 18 and 19, and will see the Rogues take on Teams from Australia, Scotland, England and USA. A finalized schedule for August 20 and 21’s quarterfinals, semifinals and finals will be confirmed after the first two days of action.

The 2022 Bingham Cup will see 148 teams from 20 countries, with Tournament activities, workshops, presentations and fixtures taking place from August 13-21. 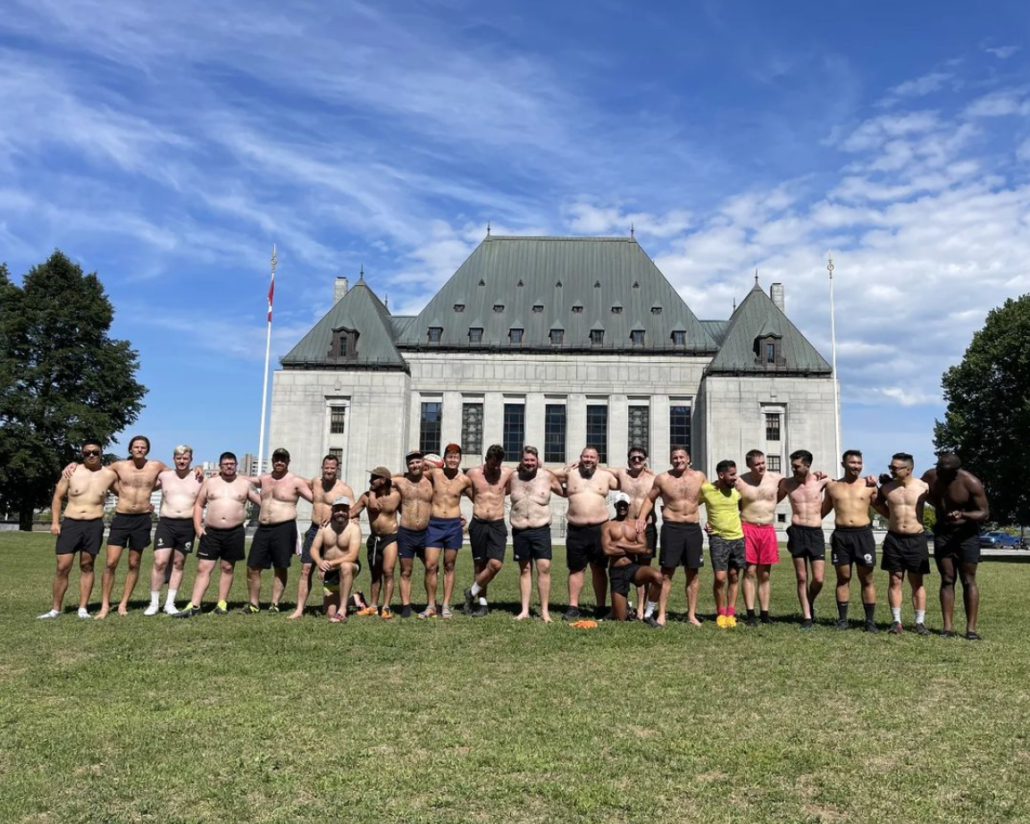 For more information on the Bingham Cup, including the full Event schedule and Tournament details, click the button below.

The Mark Kendall Bingham Memorial Tournament, or Bingham Cup as it is more widely known, is the biennial world championships of gay and inclusive rugby. The tournament was first held in 2002 in memory of 9/11 gay rugby hero Mark Bingham. As a gay man and regular rugby player, Mark played for San Francisco Fog as well as helping to set up Gotham Knights in New York City. The Bingham Cup is held in honour of Mark’s memory and challenges stereotypes and perceptions of the LGBT+ community.

Mark’s legacy sees rugby players, supporters and staff from around the world coming together every two years in a celebration of equality, inclusivity and sportsmanship. From its modest debut in 2002, the 2018 edition of the Bingham Cup in Amsterdam gathered 74 teams from 20 countries. The Bingham Cup has become the largest amateur rugby union tournaments in the world. Administered by International Gay Rugby (IGR), the Bingham Cup hosting duties are awarded through a bidding process among the members of IGR. Nine cities have hosted the Bingham Cup since inception:

The 2020 edition of the Bingham Cup, originally scheduled to take place in August 2020 was postponed due to the COVID-19 global pandemic.  Bingham Cup 2022 will be celebrating the 10th edition and is expected to be one of the largest 15-a-side rugby tournaments in the world!

International Gay Rugby (IGR) was formed in 2000 when rugby teams from across the world came together because they wanted to form an organization that promoted rugby as an all-inclusive non-discriminatory sport which everyone can play, regardless of sexuality. Formally known as the International Gay Rugby Association and Board (IGRAB), the formation of the IGR lead to the start of the Bingham Cup in 2002, which was originally known as the Mark Kendall Bingham Memorial Tournament.

The goal of the IGR is to promote equality and diversity in rugby. Specifically, it strives to eliminate discrimination on the grounds of sexual orientation and to provide opportunities for members of the LGBTQ+ community to compete in rugby. The IGR wants to improve tolerance and acceptance of LGBTQ+ athletes at all levels of the sport of rugby and ensuring that no individual shall be excluded from participating in rugby on the basis of sexual orientation or identification. Since 2002, the IGR has experienced incredible growth. As of November 2019, IGR is made up of 6,600+ members, 4,900+ players, 83 clubs, 148 teams spread over 20 countries.