Team BC went undefeated in all six of their Tournament matches to claim the inaugural Rugby 7s gold medal at the Canada Summer Games, following a fantastic performance in Niagara.

The Games, held every two years and hosted in Ontario for the 2022 event, was the first time this young team played together – and they delivered. With 232 points scored in their six games and only 17 points conceded, the 10-strong BC Team defeated teams from PEI, Quebec, Newfoundland and Manitoba in the two-day pool play, and went on to win their Semi-Final against Ontario and Final against Quebec to secure the the gold, while showcasing their skills and passion for the game all week long.

Congratulations to the Team:

THANK YOU COACHES, DARCY AND MADI!

A huge thank you to the leadership, guidance and expertise of Coaches Darcy Patterson and Madi Gold, who led Team BC to such a historic achievement. 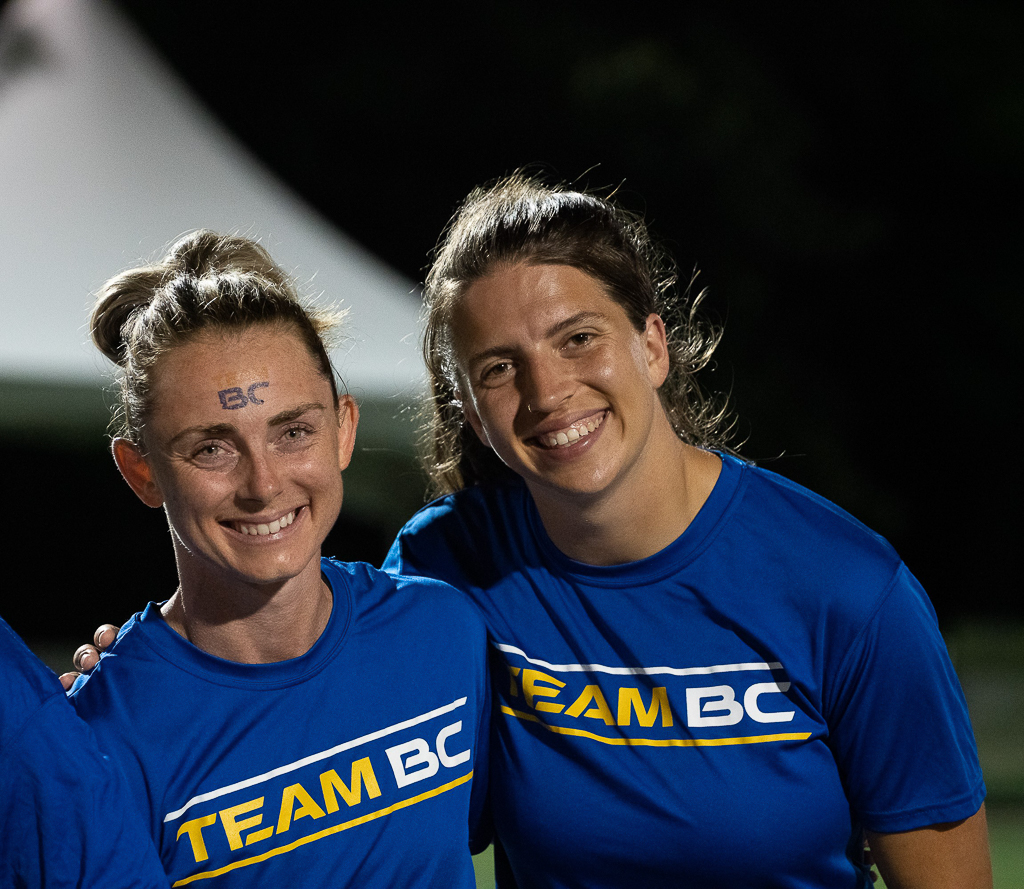 Wednesday’s late-night Final brought BC and Quebec together again for a rematch as the crowd cheered on from the sidelines of Brock University’s Alumni Field.

Both Teams had fought hard to make it to this point, with BC winning all five of their pervious games and Quebec winning four out of five, only falling to BC in their Day 1 Pool match.

Both Quebec and BC looked strong in the opening half, but it was Sienna Stigant who fought through the defense to score the first try for BC, converted by Lucie Romeo.

Once they got their footing, BC gained the confidence to take more risks on the field. They pulled together to create a strong defensive line that refused to allow any Quebec tries through. Stigant showcased her agility once again with a great steal that and run that allowed Katie Foss to power across the try line and get another BC try on the board.

The second half began with more speed and power from the Quebec side, but BC continued to trust their instincts and dig deep. Tia Jordo, Lana Dueck and Adia Pye worked together to pop the ball up the field and allow Romeo to touch the ball down for BC’s third try and conversion.

With three minutes left, BC turned up the heat and saw two quick tries from Skye Farish and Foss.

The time was out and BC kicked off their last play. Dueck stole the ball in a ruck and handed it off to Pye, who saw the space and used it: with a fake pass and direction change, the top try-scorer of the Tournament ran the ball to the end zone for one final try that cemented Team BC’s victory and status as the first ever Rugby 7s Team to be crowned champions at the Canada Summer Games.

With their sights set on a medal, the pressure was on for the Semi Final against power-house Team Ontario.

In their first game of the Day 3, Team BC slowly chipped away at the Ontario defence, edging closer to the try line until possession fell back into Ontario hands. In a brilliant move, Adia Pye was able to steal the ball mid-pass and place the ball between the posts to secure BC’s first try of the match, which Lucie Romeo converted.

Using that momentum, a BC scrum and run from Pye and Romeo allowed for the next five points to be added to the scoreboard.

The second half of the match opened with another successful scrum that allowed Anya Prokopich to turn on the gas and run in another BC try.

Ontario was hungry to answer BC’s tries and used their speed and endurance to secure a try with four minutes of play remaining.

BC aimed to press harder and finish the game strong. Utilizing a great fake pass and some nice footwork to get the ball out wide, the athletes were able to get the ball to Romeo who scored the final try of the match and stamp BC’s ticket to the Final.

Starting off with the first match of their Canada Summer Games campaign, Team BC took the first few minutes of the game to get their footing. PEI started the scoring with a try half way through the first half, to which BC responded in the next minute with their first try from Adia Pye, converted by Lucie Romeo.

With a try under her belt and confidence building, Pye scored BC’s second try to conclude the first half 12-5 in their favour.

The second half of the match was all BC, with a hat-trick try from Pye, and tries from Romeo, Tia Jordo and Grace Turner, and two conversions by Romeo and Dueck. The ball barely left BC hands as the girls settled in to the rhythm of the game and displayed that they will be a force to be reckoned with at these Games. They refused to let PEI get another try on the board and concluded the game with their first victory; BC 36 – 5 PEI.

The conditions in Niagara were stormy as BC took the field for their second match on Day 1 against Quebec.

Some quick passing down the field and a powerful scrum allowed BC to put a try on the board after the first four minutes of play, by Skye Farish and converted by Lucie Romeo.

Romeo made a breakaway after regaining possession and displayed her speed to score BC’s second try, which she also successfully converted.

A fantastic turnover and run the length of the field allowed Farish to score their second try of the match, converted again by Romeo, to conclude the first half 19-0 for BC.

The second half began with a quick steal and a powerful run by Adia Pye to start second half’s scoring with a BC try, converted by Romeo.

Quebec fought back harder against BC’s attack this half, challenging the athlete’s defense and managed to break through in the final minute of play. The slippery conditions on the field made it hard for either team to control the ball, but BC persevered and refused to give Quebec another run, finishing the match 26-5 for BC, concluding the first day with two BC victories.

Feeling good after two wins in Day 1, Team BC came out swinging for game 3.

An explosive start and smart play led to five consecutive tries in the first half, scored by Lana Dueck, Skye Farish, Lucie Romeo, Katie Foss, and Tia Jordo, along with three conversions from Romeo.

The second half began with a big run from Anya Prokopich who slid into the try zone in the first 30 seconds of play. Adia Pye continued her high scoring from Day 1 and secured the next 5 points, with Romeo converting.

Newfoundland put up a stronger defensive showing in the second half but BC was able to break through their line and play the ball out wide to Farish, who ran the ball in for the team’s seventh try of the match, converted by Romeo.

The match concluded with another nice play as the athletes used their agility to get the ball wide and Jordo swiftly finished the game for BC to defeat Newfoundland 59-0.

In the final match of Day 2 for BC, they maintained their offensive prowess showcased throughout the tournament. Three fast tries from Lana Dueck (2) and Jesse Knaggs, as well well as an additional conversion from Dueck, gave BC a strong start.

Adia Pye enjoyed a quick breakaway to score BC’s fourth try of the match, converted by Sienna Stigant, as BC led 24-0 at the break.

Stigant crossed over for try number five, before Anya Prokopich returned with another to further extend BC’s dominance. Tia Jordo’s speed was a constant nuisance to the opposition as she scored two late tries which, combined with another from Skye Farish and additional conversion from Lucie Romeo, gave BC a big 51-0 shutout victory.

Eight BC Athletes in Canada U20 Team vs. Zimbabwe