UBC Thunderbirds made it back-to-back gold medals at the 2022 Canadian University Men’s Rugby Championship and captured its fourth national title in five seasons on Sunday.

The Thunderbirds secured a dominant 48-5 victory over the McGill Redbirds on an action-packed afternoon at Thunderbird Stadium.

Earlier in the day, Trinity Western Spartans fell to an agonising 32-31 defeat against Guelph to finish fourth in its first national championships. Meanwhile, University of Victoria Vikes secured fifth spot with a dominant 52-15 victory over Memorial University.

Also on Sunday, it was confirmed that Trinity Western University would host the 2023 Canadian University Men’s Rugby Championship at Willoughby Stadium in Langley on November 15-19, 2023.

Below is a recap of Sunday’s finals: 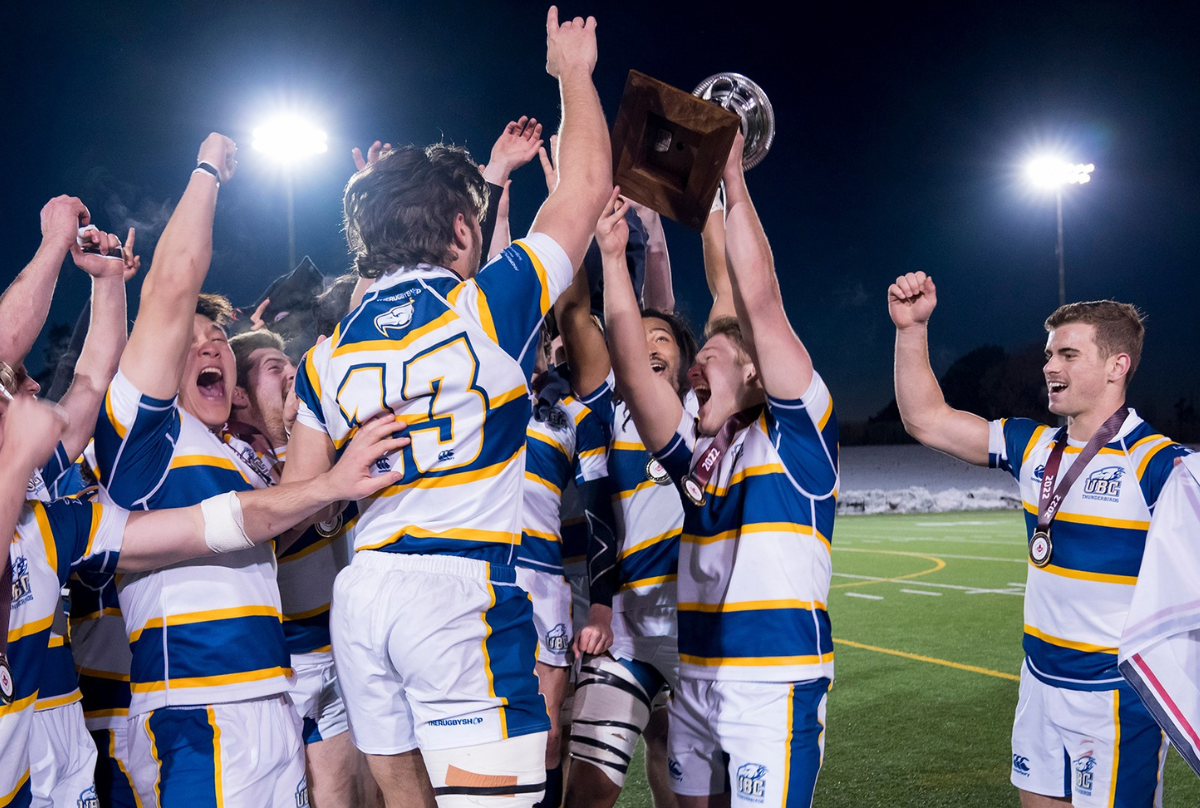 A rampant UBC won the battle of the birds to claim its fourth national Men’s Rugby championship in five seasons of play, running in four tries in each half in a one-sided game that re-established the Thunderbirds as the team to beat in Canadian University Rugby.

The Thunderbirds got on the board early with an unconverted Relmu Wilson-Valdes try four minutes in. Tenniel Cowen added a second try in the 11th minute to double their lead and there was no looking back for the defending champions after that.

Jack Carson added to that lead six minutes later, collecting the ball 40 yards out and sprinting through the McGill lines to touch down between the posts, giving Takoda McMullin his first conversion of the afternoon and the Thunderbirds a 17 point advantage.

McMullin added a penalty from close in with two minutes of the half remaining for the last scoring action of the opening 30 as UBC went in with what already looked like an unassailable lead.

The Thunderbirds took just 56 seconds to add to their tally after the restart, with Izzak Kelly powering through and touching down for try number five. Three minutes later and they added another, with substitute Alastair Marshall holding off several McGill tackles on a 40-yard run to score. McMullin converted both tries.

Marshall went over for another converted UBC try in the 40th minute, but McGill weren’t done fighting and they got a consolation try with 10 minutes remaining when they stole the ball back and Alexandre Laurendeau went over in the right corner.

With the minutes ticking down, UBC won a lineout deep in the McGill half and Callum Arnesen came out quickly with the ball to touch down for the Thunderbirds’ eighth and final try of the game, which McMullin converted for his 13th point of the final.

Carson won the Player of the Game for UBC, with Zach Auger getting the honour for McGill. 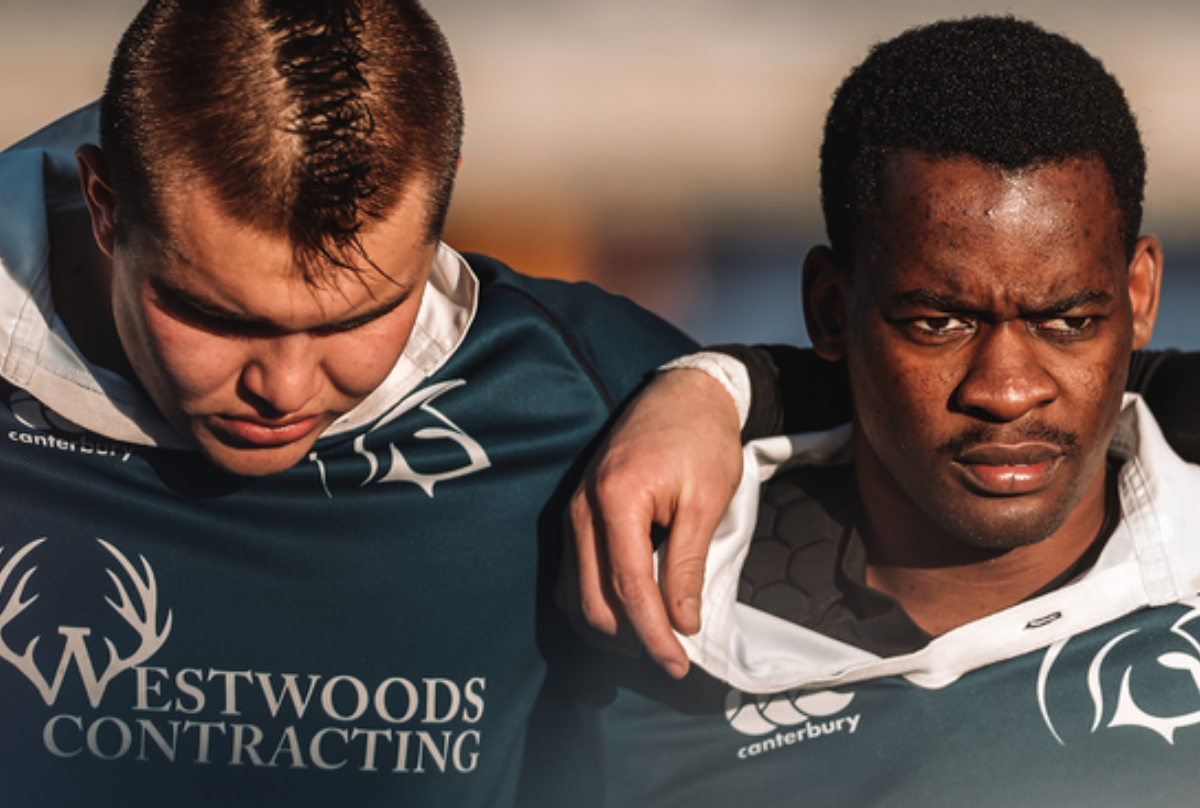 The Spartans were boosted by two tries from both Ethan Jurgeneit (Bracebridge, Ont.) and Lynden Duggan (Burnaby, B.C.), who earned player of the game honours at the event.

Matthew Willemse (Pietermaritzburg, South Africa) chimed in with six points from the tee, converting on three of five TWU tries on the day.

After a cagey opening few minutes, the game exploded into life with a series of tries and lead changes. Guerschom Mukendi went over for an unconverted Guelph try in the 9th minute but their lead was to last less than two minutes as Lynden Duggan picked up a kick and tore up the left wing to go over for the tying try. Willemse kicked the conversion to give the Spartans their first lead of the afternoon.

The Gryphons stormed back and Aidan Vachon went over the line from close in the 16th minute for Guelph’s second try of the half. Kobe Faust made no mistake with the conversion then kicked a penalty five minutes later to make it a two score game.

Trinity Western got one of those scores back in the 24th minute when Jurgeneit took a short pass and drove over the line for a try, which Willemse converted, and that was how the teams went in at the half.

The Spartans came out strong to start the second and nearly broke through on a couple of occasions, but were thwarted by a resolute Gryphons defensive display. The B.C. side finally got their reward in the 36th minute when the ball came out to Connor Bernardin on the left wing and he put on a burst of speed to go over for the go-ahead try, which Willemse was unable to convert.

Trinity Western weren’t allowed to enjoy their lead for long as Guelph went back ahead four minutes later after quickly recycling the ball and getting it out to Brenden Black, who carried it over and touched down in the middle of the in-goal affording Faust the easy conversion for the Gryphons to go back ahead by three.

Three minutes later though and the Spartans were back in front after a nice passing move saw Duggan go over for his second try of the afternoon, which Willemse converted.

Guelph responded once again with Michael McCartney carrying over the try line. Faust’s conversion attempt just missed to the outside of the right upright to give the Gryphons the narrowest of leads by a single point with 10 minutes left to play.

That lead increased to six points in the 55th minute with Owen Williams’ unconverted try, setting up the thrilling conclusion of Jurgeneit’s last ditch try and Willemse’s missed conversion, to give the Gryphons the win by a solitary point. 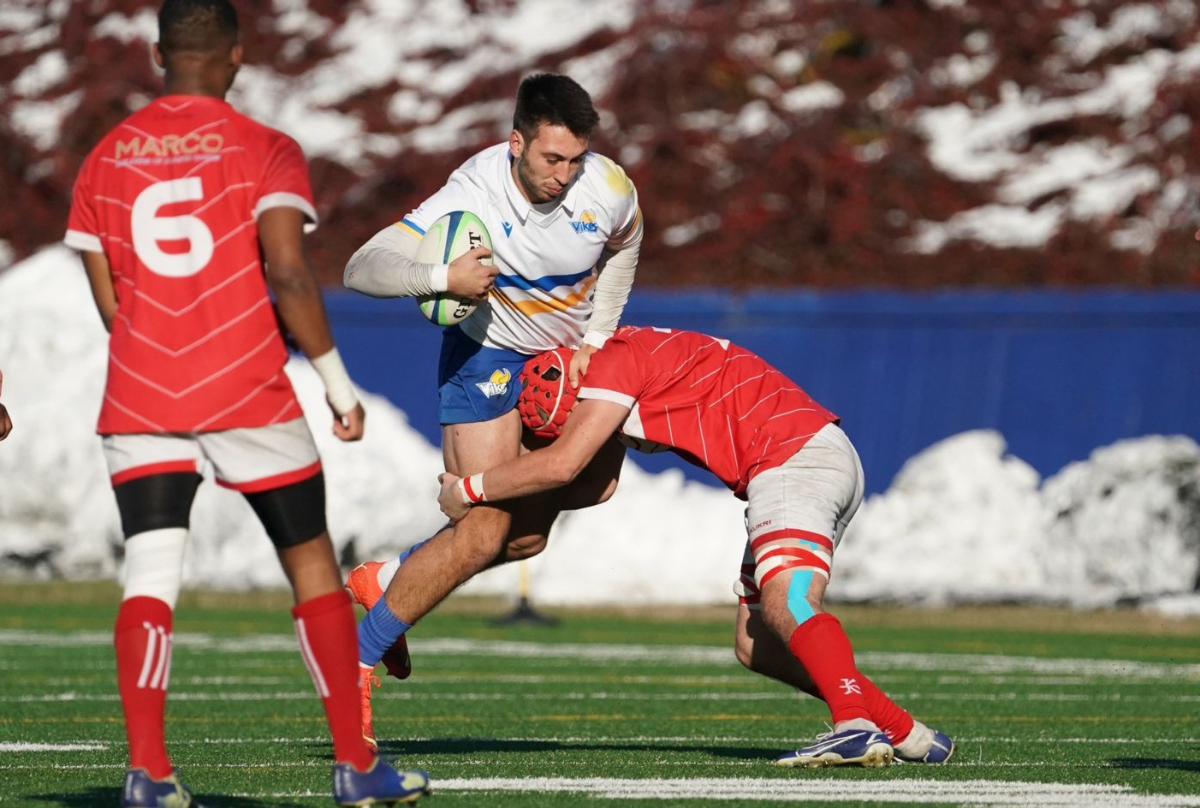 Recap by University of Victoria Vikes

The University of Victoria men’s rugby team claimed fifth place at the Canadian University Men’s Rugby Championships with a 52-15 win over Memorial University of Newfoundland, Dec. 4 at Thunderbird Stadium.

A pack push forward with Ryder Heaney-Corns carrying the ball resulted in the first try of the match for the Vikes. With a successful convert from Ethan Hager, the Vikes went ahead, 7-0, in the 12th minute.

Finding the open man on the right wing, Ethan Smith ran the ball into the end zone to extend the Vikes’ lead to 12-0 in the 18th minute.

Back-to-back tries for Memorial in the 23rd and 28th minutes resulted in the Vikes’ lead being reduced to two points, 12-10.

Pushing through defenders following a lineout, Jenner Teufel managed to touch the ball down for the Vikes in the 30th minute. A successful convert from Hager made it a 19-10 game for Victoria at the half.

Wasting no time putting points on the board, Shane Rikley-Krindle wound through oncoming defenders to reach the end zone and make the score 24-10 for the Vikes in the 31st minute. Hager added two points via convert to make to the score 26-10 for UVic.

A 60-yard run by Graeme Norris down the left side of the field resulted in a try in the 41st minute for the Vikes. Adding a Hager convert, the Vikes went ahead, 33-10.

Memorial added a try in the 45th minute to bring the score to 33-15, still in favour of UVic.

Engaging in a scrum five yards out from the end zone, the Vikes pushed Taine Clague over the line for the try in the 50th minute. Two more points from Hager on the convert brought the score to 40-15 for the Vikes.

Marcus Lott intercepted a Memorial pass and returned it for a try in the 55th minute. Two more points from Hager made Victoria’s lead 47-15.

Rikley-Krindle notched his second try of the day in the 60th minute, finalizing the Vikes’ win, 52-15.