Congratulations to the 2021 Rugby Canada Hall of Fame inductees!

British Columbia has strong representation among the six Canadian Rugby icons and one outstanding team to have their legacy cemented in the Hall of Fame.

Since the inaugural Class of 2016, the Rugby Canada Hall of Fame has recognized and welcomed the most dedicated and decorated members of Canada’s rugby community to its growing list. In 2022, eight of Canada’s ten provinces feature an inductee, a testament to the growth of the game nationwide.

The Rugby Canada Hall of Fame was established to honour and preserve rugby’s culture and heritage in Canada by recognizing the extraordinary achievements of rugby participants throughout our country. 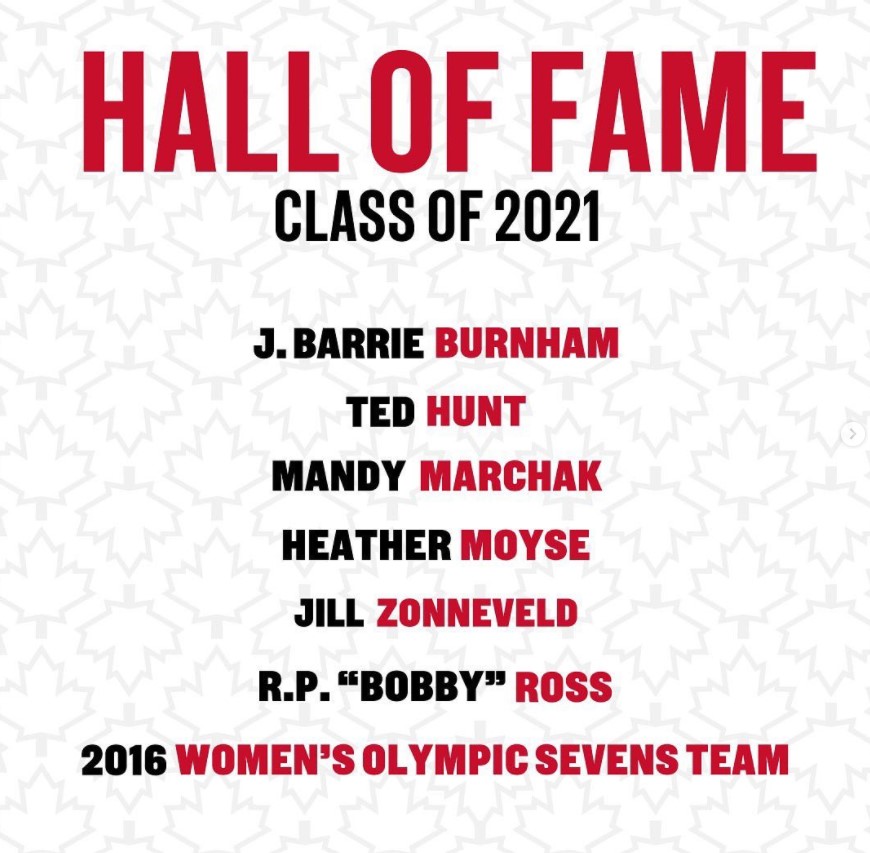 Burnham was British Columbia and Canada’s premier fullback and goal kicker for a decade. Canada only had six international matches between 1962 and 1971 and Burnham appeared in four of them. Of the 35 points Canada scored in those games, Burnham kicked 15. During this period, Burnham played for Canada & BC, against New Zealand, Australia, England, Japan, the British Lions and the Barbarians

Hunt was an extraordinary player for his high school, university, club, sub-union, provincial union and country at a time (1950’s & 1960’s) when there were very few Rugby Canada teams to play international matches. He played Rugby at the top level for two decades, competing nationally and internationally, often as captain. During the period of 1957- 1967, Hunt played and (in most) captained Canada & BC, against New Zealand, Australia, Japan, British Lions, England and the Barbarians.

Mandy Marchak played a prominent role in Rugby Canada’s 15s and 7s programs during her career. Marchak began playing in Manitoba and was inducted into the Manitoba Rugby Hall of Fame in 2017 following an outstanding career. She moved from Winnipeg to British Columbia to play with Capilano in 2004, and in 2009 she was named BC Premier Player of the Year.  Marchak competed for historic club Saracens RFC for three seasons and represented both Canada’s U-19 and U-23 fifteens sides. She was selected to Canada’s World Cup roster in 2006 and competed in a total of three World Cups, capturing a silver medal in 2014. Marchak also competed with the women’s Sevens program in 2007 and went to the first Sevens World Cup in 2009.

Heather Moyse is widely considered as one of the best fullbacks in the game and was inducted into the World Rugby Hall of Fame in 2016. She is one of only six women overall and one of only three Canadians to have received this honour in addition to being one of Canada’s all-time top multi-sport athletes. Moyse led try-scoring at two Rugby World Cups in 2006 and 2010. She captured the silver medal at the Rugby Sevens World Cup, played in 22 international 15’s matches, and appeared in five 7s tournaments for Canada and was She was named to the All-Canadian, Canadian Interuniversity Sport (now U SPORTS) team on three occasions.

Jill Zonneveld has held a presence in the development of the game of rugby at the national, regional and international levels of the sport. During her tenure as VP, Canada’s National Women’s Team, Zonneveld was instrumental in furthering competition for women and Canada with the introduction of the Canada Cup, improved funding for national team players, increased international fixtures and increasing the number of teams in attendance at the WRWC.

R.P. “Bobby” Ross entered the rugby world as a student at Victoria’s St. Michaels School, and by the time he retired in 2003, he had received 57 caps, kicked 415 points, and played in two Rugby World Cups, a qualifier match, the Pacific Rim and Pan American Series and the inaugural Churchill Cup in 2003. His 14-year career total of 415 points is second only to his teammate and current record holder, Gareth Rees. With his value extending far beyond just points and appearances, Ross is remembered as a respected leader and one of BC’s finest players.

Selected to this year’s Hall of Fame inductee list is the 2016 Women’s Olympic Team, winners of the Rio 2016 Olympic Bronze medal in Women’s Rugby Sevens competition. The Women’s Sevens team joined the Canada’s women’s soccer team as the only team sport medalists for Canada since 1936. The team’s success spurred Rugby Canada’s programs to new heights and had an immediate impact on participation and funding for the sport in Canada.

“This year’s Hall of Fame class continues the tradition of recognising members of our Canadian Rugby community who have contributed significantly to the sport and its growing presence in Canada today. We are excited to welcome this year’s inductees who are more than deserving of this prestigious honour.” Rick Graham, Chair, Rugby Canada Hall of Fame Project Team

The process to nominate an individual for Hall of Fame Consideration follows the approved guidelines which can be viewed on the Hall of Fame located HERE.

Annabel Kehoe to Leave BC Rugby as Chief Executive Officer