A challenging first day on the pitch for Henry Paul’s young roster,  which featured seven BC-based players, saw the team coming up against the trio of France, Australia and New Zealand in Group C action.

Canada opened their Saturday schedule on the front foot against France, leading 14-7 at the half thanks to tries from Elias Ergas (UBC) and Alex Russell. However, a resilient France group came out in the second half, with Jonathan Laugel and teammate Nelson Epee registering tries to pull ahead for the 19-14 win.

Anton Ngongo’s (Castaway Wanderers) late, first half try in Canada’s second match of the day cut opponent Australia’s lead to just seven heading into the second half of play with a 12-5 scoreline. Unfortunately for Canada, a stifling defensive effort from the Aussies in the second half prevented any further scoring as Australia would move on to a 26-5 win at the final whistle.

New Zealand’s offence was on display early and often in Canada’s final match of Day 1, with five consecutive tries going on the board in the first half. Canada continued to compete despite falling behind early, holding New Zealand off the board in the second half and collecting a pair of back-to-back tries from Nicholas Allen (UBC) and Thomas Isherwood, with conversions on both from Cooper Coats. New Zealand would find a last-minute try to secure a 40-14 win and close out action for Canada on Day 1. 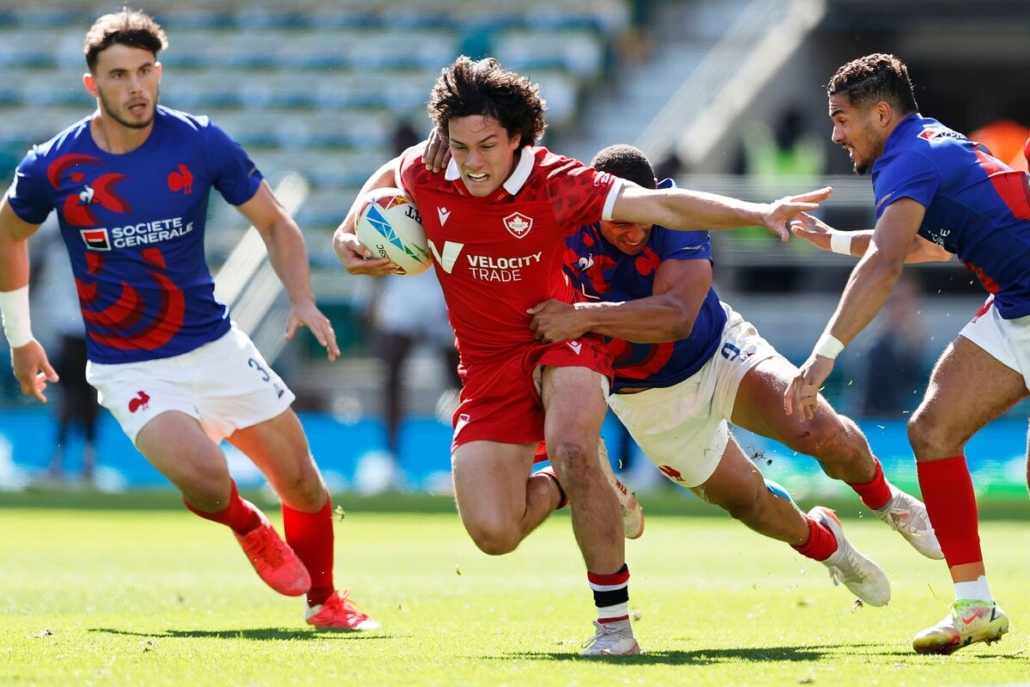 The men found themselves up against Argentina in Sunday’s opening match of the day—the 9th place semifinal match.

Canada struck first against the Argentines, with Chichester native Alex Russell collecting his second try of the weekend followed by a conversion from teammate Cooper Coats. Canada’s early lead would be short lived however, as Argentina’s offence connected on for four tries to give them a 28-7 win.

The result sent Canada into a 13th place playoff against Wales. Russell registered another try for Canada and was joined on the scoresheet by teammates Brock Webster, Phil Berna (Vancouver Rowing Club), Lockie Kratz (NOLA Gold) and Coats. The back-and-forth scoreline saw Wales leading 14-12 at the half before consecutive tries from Russell and Kratz allowed the Canadians to pull ahead for their first win of the weekend.

Canada faced Japan in their final match of the day, striking early in the second minute with a try from Coats. Teammate Phil Berna followed up Coats’ try with one of his own just before the half time whistle to give Canada a 14-5 advantage at the break. Teammates Jake Thiel (Abbotsford RFC) and Matt Oworu captured tries of their own in the second half, while Coats finished with three conversions  in the match to send Canada off on a high note with a 26-19 win over Japan.

The win secured 13th place for Canada on the final day of action in London, who will next see action when the Men’s Sevens Series concludes in Los Angeles on August 27-28, 2022 at Dignity Health Sports Park.