Canada’s Women’s 7s team secured fourth place, while the Men’s team finished in seventh as the Rugby 7s event at the Commonwealth Games concluded on Sunday. 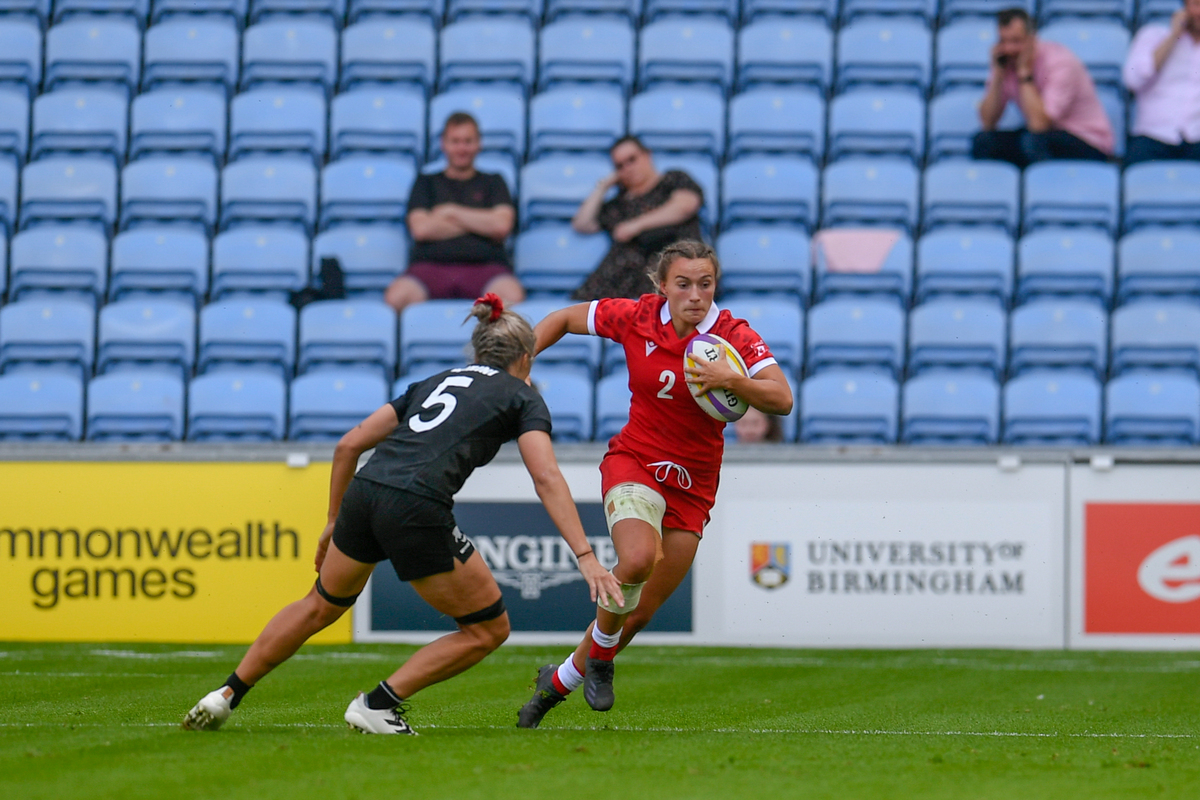 Having lost 45-7 to New Zealand in Pool Play, Jack Hanratty’s Women’s 7s team got their opportunity to come up against the Black Ferns again in the Bronze medal match. An early yellow card wasn’t the ideal start and New Zealand capitalized via a Michaela Blyde try.

Canada then had a spell of possession, but a turnover saw their opponents extend their advantage as Kelly Brazier drove over the line after a quick tap and go penalty from close range, giving New Zealand a 12-0 half-time lead.

Following the break, there was a lull in the scoring as both teams defended fiercely. The second-half deadlock was broken with just under three minutes to go, however, by Alena Saili as she penetrated the Canadian line to touch down.

Piper Logan breathed new life into the match when she showcased her pace to score Canada’s first try of the evening. Emma Chown grabbed their second with just seconds remaining to ensure it was a tense finish – but there wasn’t enough time remaining on the clock for Canada to complete their comeback and the final score read 19-12 to New Zealand.

A second-half Chloe Daniels try and Olivia Apps conversion proved to be consolations as their Pool A opponents New Zealand claimed the victory thanks to scores from Michaela Blyde (2), Kelly Brazier, Portia Woodman, Stacey Fluhler, Alena Saili and Risi Pouri-Lane.

Facing the host nation, England, in their second match of the day, the Women’s team went behind early as Ellie Boatman scored the opening try. Keyara Wardley responded for Canada as her penetrating run saw her break a tackle to carry the ball over and make it 7-5.

Debutant Piper Logan entered the field just before half time and threatened to make an immediate impact with her pace. It was Bianca Farella, though, who extended Canada’s lead twice either side of half time as she scored back-to-back tries, showing her speed and strength in both instances.

With four minutes remaining, a yellow card for England ensured Canada had a one-player overlap on the left which gave Krissy Scurfield all the space she needed to score. Grace Crompton and Heather Crowell pulled tries back for the hosts but Canada were able to see the game out and claim a 26-19 victory.

Day 2 of Sevens action got off to a quick start for the Canadians, with coach Jack Hanratty’s group scoring early and often in a dominant 74-0 performance to close out pool action.

A shallow kick from Canadian captain Breanne Nicholas allowed the Canadians to take advantage early, with Krissy Scurfield registering her first try of the match within a minute of kick off. Scurfield would finish the match with five tries in total.

Scurfield’s performance was supplemented with tries from teammates Olivia de Courveur, Piper Logan, Nakisa Levale and Keyera Wardley. Nicholas and Olivia Apps added five and a pair of conversions, respectively, in a commanding 74-0 win to send them to the semi-finals.

Coming off a decisive win earlier in the day, Canada’s women’s side found themselves in a challenging position after Fiji opened their semi-final match against the Canadians with three consecutive tries and a 17-0 lead. Despite the disadvantage on the scoreboard, Canada began to shift the run of play and capitalized late in the first half to cut the Fiji’s lead to 10 heading into the break.

Canada was on the front foot for the majority of the second half and looked poised to take advantage of a tired looking Fiji side, but could not connect on their offensive chances to narrow the lead. Fiji would add one more try as time ran out to move on into the finals with a 24-7 win. 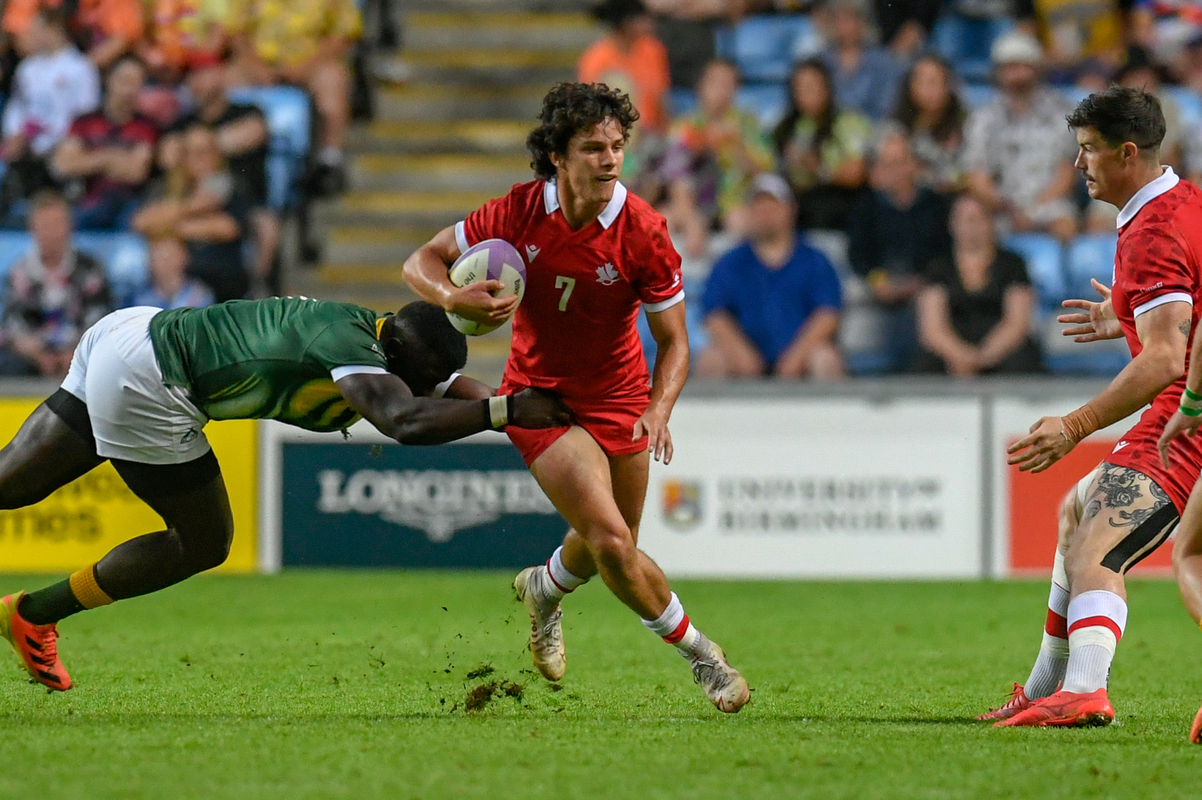 Taking the field in the fifth-place semi-final, Jake Thiel scored two tries and Uaina Sione responded for Samoa meaning Canada went into the break with a 12-7 lead.

After half time, Samoa came out with renewed energy as two tries from Steve Onosai turned the match on its head in their favour. With seconds remaining, Cooper Coats gave his all to force his way over the line. The resulting conversion, which was taken from a tight angle, would have levelled the match but was missed narrowly as Paul’s side’s Commonwealth Games journey concluded

Henry Paul’s team faced Wales in their opening Pool C match. A quick penalty from Alex Russell gave him the angle to bypass and outpace two Welsh defenders on the sideline before touching down in the corner to get Canada on the board. Cooper Coats scored their second thanks to a well-worked move which resulted in him cutting back to go over before Thiel made it three tries prior to half time.

After the break, quick hands from Thiel to feed Russell saw the No. 5 burst through for his second try of the match to make it 24 unanswered points. Down to six men after a yellow card, Wales struggled to cope with the Canadian pressure as Matthew Oworu, on his 22nd birthday, powered over the line to extend the lead and ensure the match finished 31-0.

The first day’s final match saw Paul’s Men’s team take on Fiji, who took a first-half lead through Sevuloni Mocenacagi (2) and Josua Vakurunabili tries. Just before the break, an incredible field-length kick from Coats saw Canada work their way deep into Fiji’s half. They used quick hands from a lineout to get the ball out to Brock Webster on the wing who scored in the corner.

In the second half, Canada continued to apply pressure and defended well. They were awarded a penalty try when D’Shawn Bowen used his pace to get around the outside but was impeded by a high tackle, which also resulted in a one-man advantage for Canada for the last two minutes. Despite battling hard, the Canadians weren’t able to score a winning try as they fell 19-12.

Canada saw opponent Zambia jumping ahead early with just their second try in competition for an early 5-0 lead. A pair of tries from Canada’s Josiah Morra erased both of Zambia’s first half leads and saw both teams heading into the break in a 12-12 deadlock.

D’Shawn Bowen and teammate Nick Allen added tries of their own in the second half, as Henry Paul’s side found their footing and took advantage of a shorthanded Zambia side to secure a 24-12 victory and book their ticket to the men’s quarter-finals.

Canada’s men’s team battled hard in their quarter-final match but couldn’t solve the defence of South Africa on Saturday. The Springboks’ spread out their offence in the match, receiving tries from Angelo Davids, Christie Grobbelaar, Mfundo Nahlovu and Ronald Brown (2). Brown also added a pair of conversions, with teammates Selvyn Davids and Dewald Human rounding out the conversion scores.

BC Bears Shine at 2022 Western Canada Championships
Scroll to top